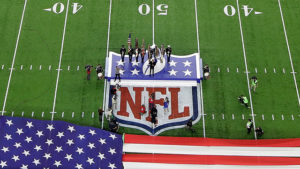 To have a successful protest, it’s probably a good idea to clearly communicate exactly what you are protesting and what solutions you are proposing. Sadly, this is not the case in America today.

You might blame the current chaos and division on President Trump, President Obama, the NFL, a complicit liberal media, racism, Colin Kaepernick, political correctness, Twitter, the National Anthem, the First Amendment, or whatever else. But while debates continue, there are some things many of us are overlooking.

Most of us would admit America’s standing in the world – our economy, reputation, and how others view us – has been badly damaged and weakened dramatically. (Exactly when things started going south is up for debate.) People see disrespect of the flag, one of the most loved symbols that identify us as a united people.

Onlookers don’t understand why young, wealthy, elite pro football players and teams are protesting – but they most likely perceive it has something to do with Trump and the government.

They see a revolution brewing, and unlike most Americans, people in other countries know about revolutions. Many did not end well. So here we are watching to see what NFL owners and players will do next while a literal mad man with nukes in North Korea could literally send the world into unprecedented calamity and upheaval. For one thing, we need to stop watching media who are more interested in political agendas than in reporting actual news.

You don’t think the world interprets NFL player’s public protests differently than how they are intended? Many teams are locking their arms – but for what exactly?

Last weekend, NFL football players over in London knelt during the National Anthem prior to a game at Wembley stadium. And if that wasn’t embarassing enough, those same American athletes then stood up for the playing of Britain’s anthem, God Save the Queen. You tell me, what message does this send to the world?

More importantly, I wonder how American war veterans feel about all this. And what about those still serving our country, fighting for our interests in other nations?

The British newspaper, The Guardian’s headline told us how they see it with the headline:

“NFL players kneel for anthem in unprecedented defiance of Trump.”

The article went on to state:

“many players, coaches and even the Jaguars’ owner Shahid Khan linked arms instead as they stood, showing unity for their black team-mates against Trump.”

I recently saw an interesting 1945 picture of President Truman with his hand on his heart, standing next to Winston Churchill saluting during the playing of America’s National Anthem. No explanation necessary.

Next, there’s been a glaring double standard with how the media and sports channels treated former NFL quarterback, Tim Tebow. Sure, he knelt on the sideline during NFL games, at midfield after a game, and in the end zone after a touchdown, but not during the National Anthem to make a statement. When Tebow knelt in prayer to Jesus, they called him divisive and “polarizing,” but when NFL players kneel in protest today, it’s considered patriotic and “unifying.”

Here’s another thought: I wonder what would happen if NFL players used their platform to protest abortion, undeniably the number one killer of African-Americans? Since I’ve written extensively on the important issue, that’s for another blog.

Most of us would agree to support the rights of any person’s free speech, but using entertainment, in this case the sports world, to promote a cause or political agenda is the wrong venue. The NFL’s ratings are down 11 percent from last year, but they can’t seem to realize American fans just want to watch a good game and root for their team. Leave politics out of it.

She wrote a letter to the NFL on Facebook saying in part:

We showed up cheering and groaning together to as one. We talked in the concession lines and commiserated and celebrated our team together. Did it ever occur to you that you and we were already a mix of backgrounds, races and religions? Your desire to focus on division and anger has shattered what many people loved most about the sport. Will we stand with you [or] …stand with our flag? You have lost me here.

The American flag is associated with sacrifices made for our freedom, and polls generally show a majority of fans are on the side of respecting the flag and anthem. The NFL is the big loser here as ratings fall and more fans talk of boycotting games. Trump is also a loser in this debate because since his boisterous comments, people will now make this about him. He should keep his mouth shut and tend to more important matters, and I disagree with his lack of tact and the language he uses.

We have a no win situation here. Will anyone offer an olive branch or will this just get worse?

Finally, of the many things I’ve read on this controversial topic, Dr. Michael Brown made some excellent points including the fact protesting during the national anthem should be avoided since it is perceived as unpatriotic. Most people also believe it would have been better if Colin Kaepernick had used a different method to express his concerns about alleged social injustice. Brown writes:

If we want to celebrate America’s greatness, we can’t ignore America’s faults. I agree with those who blame President Obama’s identity politics for much of the racial division in our country today. But I also agree with those who say that there are systemic problems in our justice system; …[but] to make this into a race debate is to play into the hands of the race baiters. Most Americans want sports to be sports.

Like many people, I’m hoping for the best. Honestly, I’m not expecting things to change the way the media keeps fanning the flames of division and hatred. The Left prefers to cultivate a climate of chaos and will play progressive politics as long as it is working in their favor.

NFL players are public figures, the world is watching, and so are American children. Some still have no idea what the protest is about. In a nation as divided politically, spiritually, and racially, I wish I could be more optimistic, but I do believe in God’s sovereignty in all things. Let’s pray that somehow this will lead more people to the only true source of peace, Jesus Christ.

Benjamin Watson has been one voice of reason in the NFL. The Baltimore Ravens tight end said Trump’s words felt like an attack on all the players, but “God is still on the throne.” He said to unite with teammates, he did lock arms with them during the National Anthem, but “I also pointed to the skies because I really believe that the Lord will have to have His hand on us when it comes to reconciling our differences.” Watson added:

“Many in the church have erroneously equated America with Christianity as if the two were synonymous. They have failed to live the gospel and created a form of patriotism gospel; We must realize that we in the church are not perfect and are influenced by our own desires and pride. The good news is the Holy Spirit can open our eyes.”

We need God to soften our hearts. We need repentance as a church and a nation. We need the gospel to be proclaimed! We desperately need revival, and yes, we need a revolution of righteousness.

Introduction to ‘Redefining Truth’ book excerpt
How the Enemy Advances