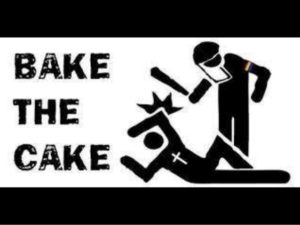 You might call this troubling, concerning, disturbing or alarming, but to those who have studied the Bible and understand the times, this trend of silencing Christians is mostly disappointing.

We should not be surprised.

On the other hand, though our culture and country seems to be heading for destruction at breakneck speed, believers know this means we are getting closer to more fulfilled prophecy and ultimately, the promised return of Jesus Christ.

One of the more eye-opening things I read this week was the fact that even with all the cases of discrimination against Christians in recent years from the public square to social media, many Americans do not support the basic religious freedom of Christians.

I’m sure you know many of the stories.

Both of them military veterans who understand the cost of religious freedom in America, Tennes stated,

“My wife and I both volunteered to serve in the military to protect freedom. Now we come home and the freedom that we worked to protect, we now have to defend in our own backyard.”

This morning I watched a video update from Alliance Defending Freedom about Kelvin Cochran, former Atlanta Fire Chief who was commended by two U.S. presidents and had earned tremendous respect throughout his career. The city and the mayor fired him because of his Christian faith. In is personal time, Cochran had written a 162-page men’s devotional book and briefly mentioned biblical teachings on sexual morality.

Prior to being fired, he was suspended for 30 days and was ordered to complete “sensitivity training” all because gay activists complained. Even the investigation into his ‘crime’ found Cochran did not discriminate against anyone, but he was fired for not tolerating diverse views.

Listing more examples would become tedious and perhaps redundant. No one can deny that Christians are being treated unfairly in nearly every aspect of public life in a country that was established on the very biblical values that have now been under attack for decades.

Many Christian and Catholic insurers, hospitals, adoption agencies, crisis pregnancy centers, and others are fighting for the right to operate in accordance with their deeply held religious convictions, but the LGBTQ lobby is fierce, powerful, well-funded, and they have the media on their side.

Who can forget just over a month ago when Democrat Socialist and Vermont Senator, Bernie Sanders self-righteously reprimanded a Trump cabinet nominee, lambasting Russell Vought for his Christian beliefs, and voted against his appointment. Is this what it has come to in government as well?

Finally, the U.S. Department of Education held a panel discussion on fatherhood and LGBT groups protested, demanding conservative viewpoints not even be allowed! They don’t even want us to believe what we believe.

How did we get here?

In part, the blame must point back to Christianity in America. Our apathy has allowed this culture of corruption, sin, and moral decay, which is due in part to the silence of the church.

And do not be conformed to this world, but be transformed by the renewing of your mind, so that you may prove what the will of God is, that which is good and acceptable and perfect.

Even as Christians, many struggle with temptation, wanting to blend in with the world, wanting to be liked, wanting people to think we are loving and thus, we seek the approval of man rather than God. Would most Christians be going right along with the tide of the new ‘tolerance’ if we were truly seeking first the kingdom of God and His righteousness? (Matt. 6:33)

Let me give you an idea what we are up against in the lukewarm church in America.

On a recent radio program, we discussed some dangerous and influential voices impacting the church. It is disappointing how many followers liberal Christians have. Christian author, Jen Hatmaker not only endorses same-sex marriage, she now goes so far as to say she believes gays and lesbians who are married should receive counseling from the Christian church – to strengthen their marriages if they want to be part of the Christian community.

She had previously claimed same-sex relationships can be “holy,” after which her books were pulled from LifeWay Christian Store. More recently, Hatmaker said she dreams of a day when church is safe for the LGBT community. Okay, define ‘safe.’ And regarding her comment on community, it is clear she does not mean biblical, Acts 2:42 community, so what does she mean? Is it that committed Christians must accept and blend in with the world?

When liberal Christians, the left, progressives, or the emergent church preach “unity,” what they often mean is uniformity. They are fine if we conform to their watering down of the true gospel. They love the idea of diversity as long as we unite around their progressive worldview that distorts the truth and deity of Christ.

But is it biblical or even wise to unite with unrepentant sinners? What message does that send to the world?

Now, I realize the church is flawed and imperfect and only Jesus can forgive and redeem us for past mistakes – including our judgmental legalism. I also realize many Christians once treated homosexuals as the worst of sinners while at the same time ignoring the massive problem of fornication and adultery within our churches.

But I want to conclude by bringing this back to the basics of the gospel, and ask this question:

Since we are commanded to love our neighbor, do we love others enough to tell them the truth even when it is not popular?

In a Gospel Herald article on this topic, Rosaria Butterfield, a FORMER lesbian is quoted. Concerned that by affirming the gay community, Jen Hatmaker is damaging them, not helping them, Butterfield shares this story:

“A few years ago, I was speaking at a large church. An older woman waited until the end of the evening and approached me. She told me that she was 75 years old, that she had been married to a woman for 50 years, and that she and her partner had children and grandchildren. Then she said something chilling. In a hushed voice, she whispered, “I have heard the gospel, and I understand that I may lose everything. Why didn’t anyone tell me this before? Why did people I love not tell me that I would one day have to choose like this?”

That’s a good question. We cannot have it both ways with one foot in the world and one in the Bible. Everyone must choose for themselves.

God or man? Justification or judgment? Repentance or rebellion? Christ or culture? The questions remain.

Not Ashamed of the Gospel

Report: Government hostility to religion spiked under the Obama administration

Why the Fuss and Fury over Repealing the Johnson Amendment?