More and more people think they have the freedom to do or be whatever they want regardless of truth or consequences, but this is simply due to our sin nature. It’s in our DNA. We want to be our own gods – especially gods of our own bodies – and we not only lack moral restraints, we are also being conditioned by a rebellious, permissive culture and a godless secular government.

In the last several decades, we’ve seen a public push by those on the left to get the rest of us to accept evil as good in just about any form, and to accommodate behaviors most people would have called “sins” fifty years ago (or at least our great grandparents would have).

I can hardly imagine how hard this is on innocent children growing up in this world today. The moral confusion and social pressure are intense, and now there is the expectation that everyone else abandon absolute truth and comply with the gender theory claim that biological facts are now mere ‘social constructs.’

Do you think most people in Hollywood, the liberal media, public education system, or leftists in government care about truth or about the morality of this ideology? Tragically, some parents are imposing their own will on their children and encouraging them to “identify” as the opposite of who God made them to be.

Then there are sad, cultural indicators of how far we have fallen for the lies.

I believe National Geographic Magazine revealed their allegiance to the humanist agenda by its child exploitation and promotion of sexual confusion in its January 2017 edition, “Gender Revolution.” Featured on the cover is a 9-year-old boy, Avery, whose mother says he identifies as a girl.

The cover caption reads: “The best thing about being a girl is, now I don’t have to pretend to be a boy.” According to Avery’s mother, he became depressed and angry after age three, but the “darkness lifted” when the child put on a princess dress.

As if to justify its actions, National Geographic editor writes, “beliefs about gender are shifting rapidly and radically,” but wait a minute; just because people’s opinions and beliefs are constantly moving does that change the truth?

On the Nat Geo website, they claim their exploration of gender “doesn’t come with a political agenda,” but their assumption seems to be ‘there is no God’ and the Bible is not true.

Since political issues are moral issues, do you believe their claim? Is National Geographic innocent and ignorant or do they have an agenda? Curiously, nowhere in the magazine or its online “research” do they even hint at a biblical worldview of gender and sexuality. The fact of intelligent design and the belief that God is Creator of mankind must have escaped their notice – or perhaps Nat Geo ran out of time in their “exploration” of the facts.

Sorry, Nat Geo, we know what our government schools did with Christianity; the same thing Hollywood, the media, and the Democratic Party did: they kicked out the God of the Bible. (Notice all other gods are welcome, but there is only one true, living God and His name is Jesus.)

How can you do a thorough investigation on human life and development without examining as much of the evidence, history, science, and views about creation as possible? You simply cannot. To my liberal friends, is it possible there is at least some facts and truth about our existence we might be able to glean from the Bible? Then why throw out the entire worldview?

National Geographic’s advice to parents was to make sure “your young child’s environment reflects diversity in gender roles and opportunities for everyone,” and even tried to falsely claim that gender identity “can’t be changed by any interventions.” So don’t even try to encourage your child according to their God-given, biological sex. Wow.

Scripture defines only two separate but unique sexes and teaches parents to bring up our children “in the discipline and instruction of the Lord (Eph. 6:4),” as well as:

Train up a child in the way he should go,
Even when he is old he will not depart from it. Proverbs 22:6

The article ends by asking Avery what the ‘ideal world’ would be like and he said that there would be no more bullying. One reader’s comment on the Nat Geo cover photo may sum up mankind’s futile quest to be our own gods:

“As long as you’re happy and aren’t hurting anyone, then do or be whatever you want.”

What conclusions does the author come to? Let children and adults define themselves. Aside from saying American culture is “lurching toward a gender-neutral society” and suggesting that even scientists and scholars can’t offer us much clarity (the smartest and brightest?), Nat Geo readers are left with a rhetorical question: “why should we cling to the rigid characterization of men and women.”

And there you have it – from a magazine that’s been in publication for 128 years.

Why refuse to at least crack open a Bible which has been proven to be at the very least historically reliable and accurate, and that most people would consider an excellent source of truth and wisdom relating to the world and to mankind? Because part of this wicked agenda is to downplay the truth and minimize or erase the differences between male and female. The normalization of homosexuality was a very effective set-up for what we’re seeing today.

The Holy Scriptures do not flow and change with the culture. Yes, God created men and women equal, in His image, and we are fearfully and wonderfully made, but equality doesn’t mean identical. They are twisting and distorting the truth in order to deceive people and sadly, the enemy is succeeding. 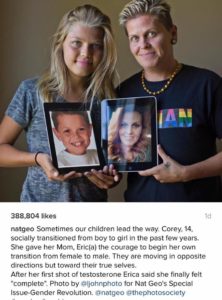 Perhaps even more disturbing is one of the photos Nat Geo posted on its Facebook page with the caption, “Sometimes our children lead the way.” Is it good parenting advice to let children make life-impacting decisions that will affect their physical and mental health as well as a family’s finances? If my folks allowed me to ‘lead the way’ when I was a kid, I can’t imagine how messed up my life would be right now.

The picture had what appeared to be a teenage girl with long blonde hair on the left standing next to a lesbian woman with very short hair wearing a black t-shirt. They were both holding pictures of their younger selves: in the photo on the left was a six-year-old boy with dark brown hair, and in the photo on the right was a woman with long blonde hair. So what’s the story?

Corey is now 14, and according to Nat Geo, “socially transitioned” to a girl in the past few years. He gave his Mom, Erica (who apparently now goes by Eric) the courage to begin her own transition from female to male. After her first shot of testosterone Erica said she finally felt “complete.”

The photo description continued: “They are moving in opposite directions but toward their true selves.” What a blatant lie of the devil. They are deconstructing themselves into their own image of themselves, the opposite of how they were created. Do you see how deceptive all this is?

Naturally, the picture had hundreds of thousands of likes; the sheeple are following.

Writing for the Public Discourse, Walt Heyer said the cover of National Geographic is a glossy reminder of the brokenness of transgender ideology. In his January 2017 article, Heyer re-emphasizes the point that even when they are affirmed, accepted, and loved, transgender individuals remain traumatized even after surgeries and many attempt suicide, “which indicates that the issues they struggle with run deeper than a change in gender identity can rectify.”

Walt Heyer is a former transgender.

“But for me, one who was restored after living for eight years as a female transgender, the cover photo is a sad and painful reminder of a lost childhood, a family ripped apart, and a marriage that did not survive.”

Walt Heyer makes another excellent point: that photo shows only one moment in time and cannot possible show young Avery’s future. One photo does not give a long-range perspective of the consequences of Avery and his parent’s choices. Pray he is not another trans-statistic.

“I was a cross-dressing boy at age nine, but – after years of pain and self-delusion – my cross-dressing stopped decades later when I realized that the idea of changing sexes is pure fantasy. Cross-dressing initially felt zany, fun, exhilarating, and wonderfully affirming of my belief that I should have been born a girl. But after many decades of trying to comprehend the gender confusion that persisted even after my sex transition, I came to understand that my grandmother’s cross-dressing of me was emotional child abuse. The psychological harm grew as years went by.”

Heyer also said he sought out a gender therapist who would affirm him and was approving of people for gender reassignment surgery. Due to political correctness and the extreme safeguarding people’s feelings at all costs, we are abandoning the ability to call what is fake “fake” and what is real “real.” Avery’s photos are a source of revenue for Nat Geo and a strategic tool for the LGBTQ lobby.

Moreover, the magazine failed to include interviews with people who have had their lives destroyed by the long-term consequences of transgenderism. Heyer states:

“I turned to Christ and away from transgenderism. I wanted to be obedient to the Lord. Obedience is giving up what I want in order to live the life Christ wants. I had to stop living in defiance of God and stop demanding that the church, God, and everyone else make accommodations for my delusions. Demanding that people use my preferred female pronoun name was childish.”

He also said cross-dressing eroded his true gender and his teenage years, “ripped apart my marriage and ended my career.” So how did he break through the bondage? Through prayer, the power of Christ, and counselling.

The transgender “T” in LGBTQ has been around for a long time, custom-built into the agenda, patiently waiting for the right time to be rolled out. The Obama administration was a major catalyst, but the path needed to be paved prior to implementing the full ideology. Their counterparts before them sought to minimize our nation’s pillars: God, truth, marriage, family, and history.

They’ve done quite a good job from the perspective of those on the left in America. But sadly, the freedom they espouse is based on feelings, deception and lies, not truth.

The only way a person can truly be free and break the bondage of sin is to acknowledge they are not God, recognize they need a Savior, and repent of their sins as they trust in Him. Only then can a person experience true forgiveness and lasting peace.

So Jesus was saying to those Jews who had believed Him, “If you continue in My word, then you are truly disciples of Mine; and you will know the truth, and the truth will make you free.” John 8:31-32

The Scandal of Biblical Illiteracy: It’s Our Problem

Why Truth Matters: Your Worldview Affects Everything

A de-sexed society is a de-humanized society

But They Said It Wasn’t An Agenda!

How The Trans-Agenda Seeks To Redefine Everyone

Radicals Taking Down America: Is The Left Winning?
Ducking the Issue of Sin: the Easy Way Out

3 Responses to The Selective Morality of the Transgender Agenda