By David Fiorazo on December 21, 2016 in Christianity, David’s Blog, The Gospel 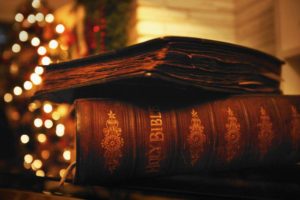 “But when the fullness of time had come, God sent forth his Son, born of woman, born under the law, 5 to redeem those who were under the law, so that we might receive adoption as sons.” Galatians 4:4-5

You see, at just the right time, when we were still powerless (helpless), Christ died for the ungodly. Romans 5:6

God’s timing is perfect and His ways are far above and beyond our ways! Before the birth of Jesus Christ, mankind was desperate; we were without help and without hope in this world. Because of the love the Father has for us, at the proper time, God sent His Son to rescue mankind.

But why wasn’t Jesus born hundreds of years earlier or later? “When the fullness of time had come,” God prepared the exact, perfect conditions: religious, cultural, and political, to invade our atmosphere with His Son, the Word made flesh. Being born of a woman, under the law, Jesus identified with us; fully man and yet, fully God!

Jesus humbled Himself, and “though he was in the form of God, did not count equality with God a thing to be grasped, (Phil. 2:6)” and paid the penalty of sin as a substitute for mankind.

C. S. Lewis simplified it this way: “The Son of God became a man to enable men to become the sons of God.”

We could not have been adopted into His family and grafted in to the Vine without God’s perfect sacrifice. Also remember the Lord sees the end from the beginning. With this in mind, do you know the first verse related to ‘Christmas’ in the Bible? We need to go all the way back to Genesis and the fall of mankind where God cursed the serpent, saying:

The battle lines were drawn!

The Curse of Genesis 3:15 is Central to Understanding the Bible and the battle of good vs. evil!

A great sign appeared in heaven: a woman clothed with the sun, and the moon under her feet, and on her head a crown of twelve stars; 2 and she was with child; and she *cried out, being in labor and in pain to give birth. … (5) And she gave birth to a son, a male child, who is to rule all the nations with a rod of iron; and her child was caught up to God and to His throne. …(17) So the dragon was enraged with the woman, and went off to make war with the rest of her children, who keep the commandments of God and hold to the testimony of Jesus. Revelation chapter 12:1-2, 5, 17

Here’s the key: the woman about to give birth is the nation of Israel, the collective offspring of Eve. The dragon or serpent is the ultimate offspring of Satan, symbolizing the Antichrist, or man of lawlessness.

The devil knew the promised Messiah would come—and that He would come from the Jewish people. So he tried to stop that from taking place. Remember King Herod tried killing all male babies under two years old (Matt. 2:16) in the vicinity of Bethlehem after hearing from the wise men where the prophesied child was to be born?

So as we look deeper into the Christmas story, we realize that it doesn’t begin in Matthew or Luke. God had a masterful plan. The mystery of the incarnation begins in the Old Testament with prophecy pointing to Jesus Christ who became human without ceasing to be God. The Word became flesh (John 1:1, 14).

God had it all planned out well in advance and told the people of Israel to remember past history which included their deliverance out of Egypt, speaking through Isaiah,

Jesus would fulfill hundreds of prophecies (with more to come!) and thus prove God’s faithfulness! The message of Christmas is that we were at one time separated from the Lord because of our sins, and God came to this earth as foretold, “Immanuel, meaning ‘God is with us.’”

“If we could condense all the truths of Christmas into only three words, these would be the words: “God with us.” We tend to focus our attention at Christmas on the infancy of Christ. The greater truth of the holiday is His deity. More astonishing than a baby in the manger is the truth that this promised baby is the omnipotent Creator of the heavens and the earth!”

Through Isaiah and others, God spoke, predicting the birth of Christ about 700 years before it happened.

For to us a child is born, to us a son is given; and the government shall be upon his shoulder, and his name shall be called Wonderful Counselor, Mighty God, Everlasting Father, Prince of Peace. 7 Of the increase of his government and of peace there will be no end, on the throne of David and over his kingdom, to establish it and to uphold it with justice and with righteousness from this time forth and forevermore. The zeal of the Lord of hosts will do this. Isaiah 9:6-7

This describes the eternal peace of the millennial kingdom as well as the virgin’s child being the rightful Son of David and heir to his messianic throne. Also notice in the last sentence how the Lord is passionate and enthusiastic about His divine plan to usher in His kingdom and reign with justice and righteousness.

“And behold, you will conceive in your womb and bear a son, and you shall call his name Jesus. 32 He will be great and will be called the Son of the Most High. And the Lord God will give to him the throne of his father David, 33 and he will reign over the house of Jacob forever, and of his kingdom there will be no end.”

Then in another surprise to Mary and Joseph, look at Simeon’s prophecy in the gospel of Luke:

Now there was a man in Jerusalem, whose name was Simeon, and this man was righteous and devout, waiting for the consolation of Israel, and the Holy Spirit was upon him. 26 And it had been revealed to him by the Holy Spirit that he would not see death before he had seen the Lord’s Christ. 27 And he came in the Spirit into the temple, and when the parents brought in the child Jesus, to do for him according to the custom of the Law, 28 he took him up in his arms and blessed God and said, 29 “Lord, now you are letting your servant depart in peace, according to your word;

30 for my eyes have seen your salvation 31 that you have prepared in the presence of all peoples, 32 a light for revelation to the Gentiles, and for glory to your people Israel.” 33 And his father and his mother marveled at what was said about him.34 And Simeon blessed them and said to Mary his mother, “Behold, this child is appointed for the fall and rising of many in Israel, and for a sign that is opposed 35 (and a sword will pierce through your own soul also), so that thoughts from many hearts may be revealed.” Luke 2:25-35

With the prophets speaking through the years of the coming Messiah and with expectation so high, there were still apparently few people who recognized and realized the significance of the birth of Jesus Christ at the time.

Moreover, the greatest men and women of God, many of them mentioned in Hebrews 11, the great ‘hall of faith,’ would not see the promised salvation in their lifetimes and yet still believed.

And all these, though commended through their faith, did not receive what was promised, 40 since God had provided something better for us, that apart from us they should not be made perfect… Hebrews 11:39

The faith of O.T. saints looked forward to the promised salvation, the Deliverer, whereas the faith of those after Christ look back to the fulfillment of the promise! We are ALL saved by Jesus’ atoning work on the cross and fortunate to be in such company!

Therefore, since we are surrounded by so great a cloud of witnesses, let us also lay aside every weight, and sin which clings so closely, and let us run with endurance the race that is set before us, 2 looking to Jesus, the founder and perfecter (the beginning and the end) of our faith, who for the joy that was set before him endured the cross, despising the shame, and is seated at the right hand of the throne of God. Hebrews 12:1-2

Jesus stepped down and set aside His crown of gold to temporarily wear a crown of thorns. These verses remind us to leave our cares and excess baggage from the past behind and overcome every obstacle that may be hindering us from knowing God better and experiencing His forgiveness. This race is not a quick sprint, but one for which we need training & endurance.

The Genesis prophecy said Jesus would be injured in the battle. At the cross, Satan bruised the heel of Jesus, but soon Jesus will crush Satan, ultimately dealing a death blow to him.On the Day of His return and final judgment, Satan will be vanquished forever.

Appearing to the Apostle John during his exile on the Isle of Patmos, Jesus declared:

“Behold, I am coming soon, bringing my recompense with me, to repay each one for what he has done. 13 I am the Alpha and the Omega, the first and the last, the beginning and the end.” Revelation 22:12-13

May we focus on Him and look for every opportunity to share the good news of Christ this Christmas and every day until He returns or takes us Home.

Christmas is so much more than parties, plans, presents, food, family, and festivities. God sent His Son for us so that whoever believes in Him could have eternal life. He sees the end from the beginning and knows the number of our days. If you have never received God’s perfect Gift, why wait? You can have the assurance of salvation now.

God’s perfect plans always prevail. He redeemed us at just the right time, forgave our sins, and He will return to deliver us eternally (2 Cor. 1:10). May our hope and trust be in Him alone. Merry Christmas!

Worldview from Inside the Elite Bubble
The Conscience of America: Good News, Bad News