By David Fiorazo on February 16, 2016 in Christianity in America, David’s Blog, Socialism 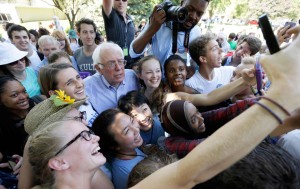 Less than seventy-five years ago, six-time candidate for the Socialist Party of America, Norman Thomas, stated:

Signs now point to the fact that many Americans have been seduced by socialist ideology resulting in a more secular society where man is god and manipulates outcomes. Christians are not immune from the influence of this worldview that leads to the death of economic stability, morality, and accountability in government.

In the Iowa caucuses a few weeks back, Democrats overwhelmingly supported Vermont Senator Bernie Sanders – an avowed “democratic socialist” – with 84 percent of those under 30 backing him. Let’s face reality: when MSNBC’s Rachael Maddow asked Hillary Clinton if she is “too far to the right” for liberal Democrat voters, not only have we witnessed an entire progressive party veer toward socialism, but it revealed where many in the liberal media stand.

In the appendix of Milton Friedman’s 1980 book Free to Choose, he stated that most of the 1928 Socialist Party platform of Norman Thomas was already part of the federal establishment in America in the eighties when President Reagan began his tenure. Some Democrats distance themselves from the word “socialist,” but continue marching the country toward its definition.

Can you blame young people today for supporting socialism when many are raised to be narcissists with an entitlement mentality? They think they are owed a living, don’t care who has to pay for it, and they were not taught the true world history of socialism including the horrors of Lenin and Stalin who murdered millions of their own people in Russia.

Robert Knight of The Washington Times suggests today’s young voters are part of “the Free Stuff Army” Obama has been cultivating since he took office. Knight added:

How could so many young people expect others to pay entirely for their college education, all their medical needs and their job training, which Mr. Sanders has promised if he’s elected?

People falling for the siren song of socialism are not callously ignoring the many failures and atrocities committed in that doctrine’s name; they’re often blissfully unaware. For the past several decades, government public schools and nearly all colleges have touted socialism’s principles of redistribution, racialism and class envy while declining to connect the dots between socialism and tyranny, examples of which abound.

A January 2016 poll found 43 percent of Americans under thirty now have a favorable view of socialism. Why? Rather than wanting to help feed and clothe the poor, they really just want to help themselves.

According to World Vision, the number of people living in poverty worldwide in the last twenty years actually has fallen by half. In 1990, forty three percent of the world’s population lived in extreme poverty. In 2013, the United Nations estimated that just 22 percent of the world’s population continued to live in extreme poverty.

The social justice movement has deceived many well-meaning Christians and it perverts the biblical concept of charity. It has always been the Church’s job to care for the poor. God calls us to help orphans and widows, and give cheerfully from our hearts (2 Cor. 9:7) – voluntarily – but God does not advocate tax burdens on all of society.

When Jesus faced Roman prefect, Pontius Pilate, He didn’t ask Pilate for financial aid to help the poor. Jesus didn’t complain about  economic injustices in Galilee or Nazareth or Bethlehem. He didn’t ask for the Roman government to step in and spread the wealth. In fact, Jesus stated, My kingdom is not of this world (John 18:36).

Every individual Christian is responsible to obey God’s Word and do what we can to manage our (His) resources to help those in need, and humanitarian efforts should coincide with the preaching of the gospel. Once the State gets involved however, evangelism is not allowed.

Christians need to be the hands and feet of Jesus, but poverty and hunger will never completely be eradicated.

The poor you will always have with you, and you can help them any time you want. But you will not always have Me (Mark 14:7).

To liberals, “social justice” means a level of fairness as defined by them and enforced by the state. Their argument is that the church has generally not done a good job taking care of the poor – which is true – so the government must step in. The solution should never, ever be government intervention.

American history has proven big government programs rarely if ever do what politicians promise. In the 1960s, President Lyndon Johnson launched his Great Society, establishing Medicare, Medicaid, The Housing Act, and dozens of other programs intended to lift Americans out of poverty.

In his 1964 State of the Union speech, Johnson declared a “War on Poverty.” He and the Democrat-controlled congress funded programs that were supposed to provide a safety net for Americans and other programs such as the Food Stamp Program that were allegedly created to help hurting families in the nation. Ask folks in the inner cities if the plan worked.

Congress also gave Johnson the green light to begin funding education and environmental programs. The era of big government spending was underway. In 1965, President Johnson said his Great Society “is a society where no child will go unfed, and no youngster will go unschooled.”

The supposed war on poverty failed to help those who needed it the most and has piled massive debt on future generations. Politicians voted themselves more money from the treasury, and today’s government has even less restraint when it comes to (spending) the people’s money.

America finds itself in a very dangerous place in which more citizens – particularly young adults – have bought into what they’ve been sold by progressive educators, a hyper-liberal media, and a godless government and administration.

Keeping a Lid on the Truth about Socialism

Millennials and socialism: What’s the attraction

The Appeal of Socialism to our Youth

It Could Never Happen in America

The Media’s Softness for Sanders and Socialism

Most Americans Believe in a Creator
Interviews: David Fiorazo on Understanding the Times

One Response to Americans are Being Sold on Socialism