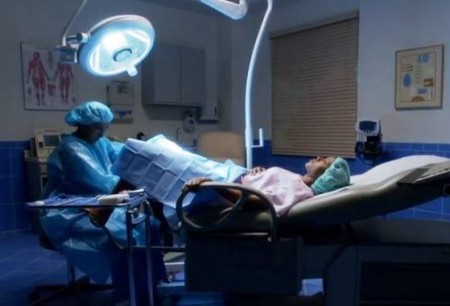 Overlooked however, were television ads featuring two gay dads, the news about Target Corporation fully backing radical LGBT legislation (‘Equality Act’) that would criminalize Christianity, and not surprisingly, the promotion of abortion on prime time television.

Losing public support due to its many scandals, what’s an abortion giant to do? Have Hollywood promote your godless cause!

It can’t get any worse than abortionists advertising fresh baby parts to the highest bidder and pulling dead babies out of the freezer, right? We already told you about Katie Couric’s problematic PR visit to Planned Parenthood, but last night’s winter finale of Scandal was one big, hour-long Planned Parenthood advertisement.

I’ve never seen the show and had no idea it’s been on television since 2012, but in this episode, the character Olivia (Kerry Washington) gets an abortion for convenience.

Not many shows have tackled the abortion issue in such detail, but to state the obvious, ABC’s Scandal and most prime time series’ have no problem openly glorifying adultery and of course, homosexuality. Its pilot episode involved a conservative Christian Republican being told by Olivia that he should embrace his same-sex attraction and put those “bigoted Christian values and voices” behind him.

But if you think you’ve heard the worst part of this offensive story, think again.

During the scene in which Olivia is to have her baby ripped out of her womb and its life destroyed, surgical instruments are shown and as the abortionist begins the horrific procedure, background music is playing.

…Round yon Virgin, mother and child; Holy infant, so tender and mild; Sleep in heavenly peace. 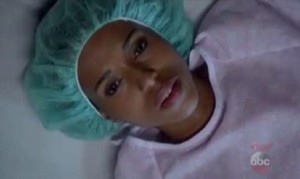 Hollywood uses one of the most brutal acts the Bible refers to as child sacrifice to mock the Savior of the world, who in reality was “born that man no more may die,” to quote another Christmas song.

The show is simply another display of Hollywood’s moral depravity, pushing the envelope of decency further.

And during the abortion, we hear the voice of Olivia’s dad, Eiljah Pope, saying:

A pressure point, soft tissue, an illness, an antidote to greatness. You think you’re better off with people who rely on you, depend on you, but you’re wrong, because you will inevitably end up needing them, which makes you weak, pliable. Family doesn’t complete you. It destroys you.

Aren’t the words they chose interesting? Newsbuster’s Alexa Coombs points out many on the pro-abortion side look at a baby this way: a “pressure point, soft tissue, an illness, an antidote to greatness.” Moreover, the show also trashes the concept of family during Christmas, a time to celebrate God’s love for us, giving, and family.

The Bible teaches about a future judgment, the fact sin separates us from God, and that we all need forgiveness. It is God’s will that people be saved and come to know the truth, but how can they receive a ‘second birth’ if some are not allowed a first one?

Liberals promote Planned Parenthood as a savior for women, but abortion leaves most women damaged for life.

Also, do they really give women a “choice”? One statistic that blows up their argument is the massive amount of abortions committed (34,000/yr) compared to the extremely low number of adoption referrals (2,300/yr). Selling abortion is a huge federally-funded business.

Another big lie the industry of death promotes is abortion liberates women, but one tragic result of this controversial practice is human lives are considered expendable.

We sure do need a real Savior.

Most post-abortive women understand the anguish that comes afterward, including symptoms such as anger, grief, guilt, regret, depression, nightmares, self-hatred, self-medicating, promiscuity, or even attempted suicide. This is bondage not liberation, and Hollywood along with the liberal media refuse to tell the whole truth about the devastating consequences of abortion.

On that silent, holy night a few thousand years ago in history, a loving God that values every human life, sent His only Son to die for us – so that whoever believes in Jesus Christ will have everlasting life.

Doesn’t this sound more like real hope that can truly set a person free?

Boycotting the Truth to Promote Death

The Man Behind the Myth That Abortion is Empowerment