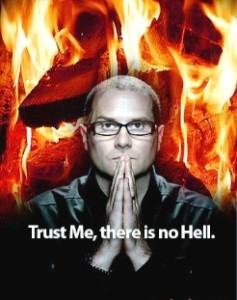 When the sinner sees the awful consequences of breaking the Law of God—that he cannot escape the certainty of judgment—he will see his need to put on the Lord Jesus Christ. When we preach future punishment by the Law, the sinner comes to Christ solely to flee from ‘the wrath to come.’ Charles Spurgeon

The former founding pastor of Mars Hill Bible Church in Grand Rapids, MI and a popular icon in the emergent church movement, Rob Bell grew his following in part by being a friend of the world. Bell often used suggestive ques­tions rather than declarations to challenge traditional Christian doc­trine and undermine the Bible’s authority.

In typical emergent fashion, Bell often creates more ambiguity instead of clar­ity, having no genuine commitment to absolute truth. So it’s no surprise to many of us that Bell came out in favor of homosexuality.

I am for marriage. I am for fidelity. I am for love, whether it’s a man and woman, a woman and a woman, a man and a man. I think the ship has sailed and I think the church needs — I think this is the world we are living in and we need to affirm people wherever they are.

But from the beginning of creation, ‘God made them male and female.’ ‘Therefore a man shall leave his father and mother and hold fast to his wife, 8and the two shall become one flesh.’ So they are no longer two but one flesh. What therefore God has joined together, let not man separate.” Mark 10:6-9

God is patient with us, yes; but He is not tolerant of evil. Of course God loves every one of us to the point of sending His Son Jesus Christ to the cross to die in our place, but nowhere in Scripture does He tolerate sin – any sin. He’s holy, just, and perfect; and He takes punishment for sin seriously. Christ talked about the reality of Hell and God’s judgment often in order to warn people to repent.

Why am I updating an article from three years ago? Bell has a new book coming out called, How to Be Here: A Guide to Creating a Life Worth Living, and I was so disappointed to see an endorsement from Green Bay Packer’s quarterback, Aaron Rodgers on Bell’s Amazon book page:

“Listing all the ways in which Rob has positively impacted my life would take up too much space; so I’ll simply say that he has inspired me to live life with a deeper level of appreciation and to love people with a greater awareness of our connectivity.”

It’s sad because Rodgers was once a professing Christian and, being friends with someone like Bell, it’s hard to say what he believes today. We do know that his girlfriend, Hollywood actress Olivia Munn, bragged about their sex life, saying that as a rule they don’t have sex on a game day – before the game. However, she did say they have sex on occasion after the games. Munn admitted, “It depends on how late the game is …I try to have sex as much as I can.” Why is this important? Aaron is a role model for young people for millions of football fans. Christian kids that look up to him could easily justify having sex with their girlfriends because of Rodger’s Hollywood lifestyle.

Bell’s compromised, liberal theology of mass appeal is empty of the true gospel message and is dangerous, which is why I added a few important links below. His new book description reads more like a pep talk from Anthony Robbins, Oprah, or Joel Osteen than something based on Scripture that can help edify Christian readers in their faith.

Rob Bell wants to help us make those dreams become reality. Our path is ours and ours alone to pursue, he reminds us, and in doing so, we derive great joy because we are living our passions… Rob gives you the support and insight you need to silence your critics, move from idea to action, take the first step, find joy in the work, persevere through hard times, and surrender to the outcome.

You might recall back in 2011 when MSNBC’s Martin Bashir grilled Bell over his mushy position on Hell and eternal judgment. Even Bashir, a liberal cable TV host, referred to Bell’s teachings as unbiblical and historically unreliable. Bashir confronted Bell and said he was “amending the gospel so that it’s palatable,” and “much easier to swallow.”

It’s easy to see that Bell is giving our culture exactly what it wants: friendship with the world, and nothing too confrontational, convicting or absolute. In the Gospels, Jesus described hell as: a fiery furnace, outer darkness, a place of destruction, agony, torment, where there is weeping and gnashing of teeth. Bell, on the other hand claims:

“For Jesus, heaven and hell were present realities. Ways of liv­ing we can enter into here and now. He talked very little of the life beyond this one… No amount of clever marketing will attract people if we teach that ‘God will punish people for all of eternity.’

Because of sin, judgment must come. The Word of God leaves no doubt about the existence of hell and severity of it. God has provided everything we need to know about hell and how to avoid it through faith in the sacrifice and resurrection of Christ. Bell is an example of the product of Protestant Liberalism that evolved back in the nineteenth century. When the message is watered-down, it can be confusing to the biblically illiterate.

This brings us to Universalism which teaches that all people will ultimately be saved no matter what they believe here on earth. You can live the way you want: sin, curse God or deny Christ and still make it into heaven. Some Uni­versalists say their salvation is through the atonement of Jesus Christ while others think everybody will go to heaven eventually regard­less of whether or not they have put their faith in Christ.

Apparently this universal redemption will be realized either during a person’s lifetime or after their death in some future state. Since there are many variations of Universalists, it’s not possible to place them all in one doctrinal category.

“What Jesus does is declare that he, and he alone, is saving every­body. And then he leaves the door way, way open.”

Christian Universalism however, holds that all of mankind will ultimately be saved through Jesus, whether we place our faith in Him as the Son of God or not. This salvation is not from hell, but from sin, thus pretty much eliminating the truth about a future Judgment Day. As you can imagine, this is a very appealing teaching to young people, and an entire generation of evangelicals has already been poisoned with this unbiblical doctrine.

After all, who wouldn’t want to accept a God of love without having to hear about repentance, holiness, judgment and justice?

Some Universalists believe they will make it to heaven because a lov­ing God would never create a place like hell. They think they will have to make up for their sins in some way – in heaven – and that they are disciplined and purified in this life for their sins. Most believe punish­ment for sin is moral, not physical since there is no eternal damnation. Christian Universalism boils down to the claim that any doctrine about a literal hell is wrong.

There are those who also split hairs over the essential doctrine of Christ’s physical resur­rection, believing He was taken into heaven by God instead of actually rising from the dead and coming out of the tomb. Groups that deny the physical resurrection of Jesus are not Christian, nor are groups who deny the teaching of the Trinity.

One of the more dangerous Universal­ist beliefs is a type of reincarnation in which those who have rejected Christ get a second chance and can still come to faith in the next life. These teachings should be avoided, and it’s always best to test all things by the living Word of God.

Dear friends, although I was very eager to write to you about the salvation we share, I felt I had to write and urge you to con­tend for the faith that was once for all entrusted to the saints. For certain men whose condemnation was written about long ago have secretly slipped in among you. They are godless men, who change the grace of our God into a license for immorality and deny Jesus Christ our only Sovereign and Lord.  Jude 3-4

For more on the effects of the emergent church, counterfeit Christianity, and other false teachings on America, see chapters 12-13 in Eradicate: Blotting Out God in America