By David Fiorazo on October 5, 2015 in Christianity in America, David’s Blog, Uncategorized 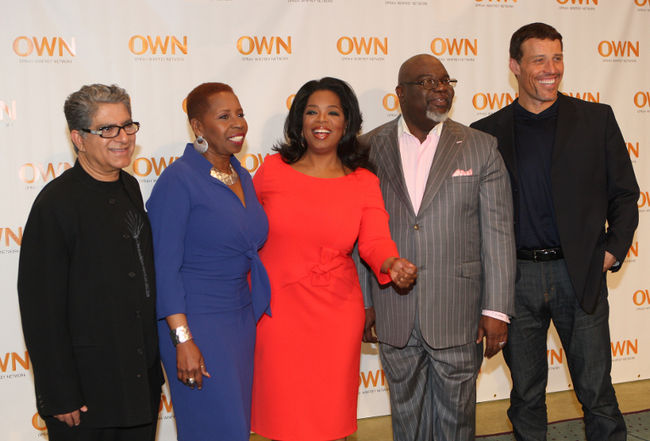 Oprah Winfrey has become more influential than most of America’s pastors and religious leaders. Too many people today follow pop-culture icons and celebrities and even many Christians end up believing their teachings. Oprah has launched book sales and resuscitated careers for many authors and spiritual gurus while giving proponents of higher spirituality a platform, particularly those who promote a New Age philosophy.

In one interview on her network, OWN, she asked Deepak Chopra and other leading spiritual thinkers about God; remember, she promotes these folks and their teachings as truth. It went like this:

Oprah: What is your definition of God?

Deepak Chopra: God is the evolutionary impulse of the universe…

Debbie Ford: A spiritual energy. It has no denomination, it has no judgment…

Wayne Dyer: God is the highest place within each and every one of us. It’s our divine self.

Gary Zukav: I don’t have a definition of God, because I’ve never really understood that word…

Marianne Williamson: An all-encompassing love that is the source of all, the reality of all, and the being through which I am.

Eckhart Tolle: God is beyond all the forms of life, but also indwells every form of life as their essence. God is both beyond and within.

Remember this: Satan disguises himself as an angel of light (2 Corinthians 11:13-15), and in these last days, false prophets and teachers will deceive many professing Christians. Jesus warned true believers many times to be watchful and to “be not deceived.”

Oprah has made many confusing claims in the past including:

(The following is an excerpt from my first book, Eradicate: Blotting Out God in America, from the chapter, “Emerging Into Confusion.”)

In his book, For Many Shall Come in My Name, Ray Yungen describes the term “New Age” as based on astrology. Some believe there are cosmic cycles in which the Earth passes through a time period when it falls “under the influence of a certain sign of the zodiac.” This is a belief system stating that everything exists and revolves around energy containing tiny particles: atoms, molecules, protons, etc.

All is energy. That energy, they believe, is God, and therefore, all is God. They believe that since we are all part of this ‘God-energy’, then we,too, are God. God is not seen as a Being that dwells in heaven, but as the universe itself.

Many New Age proponents strive for a “Christ consciousness” or a “higher consciousness” in an effort to become more aware of these spiritual realms; the most direct way to achieve this is through meditation, “a primary source of spiritual direction of the New Age person.”

There are great resources available on the occult practices and history. It is so important to immerse ourselves into the Word of God and study to show ourselves approved by Him. We must be discerning about things such as: contemplative prayer, “centering prayer” and mantras, the law of attraction, witchcraft and Harry Potter, the Kabbala, spiritual formation, Labyrinth walking, and Wicca.

Teachings promoted by well-known celebrities (or best-selling authors) are dangerous because people tend to believe and follow those they idolize.

How can there be only one way to heaven or to God? – Oprah Winfrey

You may have heard about A Course in Miracles, written by well-known New Age representative Helen Schucman, who claims the book came directly from her inner voice. In the course, the listener is taught there is no sin, they are told not to make the “mistake” of “clinging to the old rugged cross,” and that the name of “Jesus Christ as such is but a symbol.”

Oprah has done many good things to help people, but does that mean we should trust her theology and religious beliefs? I’m not judging her heart because we are all wicked without the atonement of Jesus Christ. [Some] Christian pastors have warned about the teachings promoted by Oprah. A Course in Miracles teaches that God is in everyone and everything and that “the oneness of the Creator and the creation is your wholeness, your sanity, and your limitless power.” Wow.

Maybe you’re an Oprah fan and have always defended her, or maybe you had no idea what she believes. In an interview with Oprah, New Age author and mystic Eckhart Tolle criticized Christianity and also took live calls from viewers. Tolle stated:

The moment you say ‘only me belief’ or ‘our belief’ is true, and you deny other people’s beliefs, then you’ve adopted an ideology… and then religion becomes a closed door.

Oprah told the caller to simply realize Christianity is but one of many ways to achieve the higher consciousness, and the belief that one must follow a set of doctrines is a consequence of “ego consciousness.” [Always the opportunist, she should talk about ego?]

She holds that while Christianity is a valid way to achieve high states of spirituality, it must not be considered a unique way, or a “correct way.” Oprah believes God is all love, and she does not subscribe to the teaching that He is also a holy, jealous, just, and vengeful God. She told her audience:

The new spirituality is that you are your own best authority as you work to know and love yourself, you discover how to live a more spiritual life.

Sadly, millions of spiritual seekers have been led astray; and due to Oprah’s popularity, people have opened themselves up to all kinds of practices, religions, and teachings contrary to the gospel of Jesus Christ and biblical Christianity.

We need to pray for her and for those who may blindly hang on her every word, or the words of any secular celebrity.  Oprah is not the enemy – she is deceived – but she obviously believes she has the answers regarding God, spirituality, and eternity. People need to be warned; countless unsuspecting souls following her and those like her are being led away from the One true God and down a path of destruction… (end of excerpt)

Why is this important? A majority of young people today identify as being spiritual, not religious, and they trust their celebrity role models, even when it comes to bad theology. Some have already fallen for New Age teachings and tragically, many within our church denominations have been influenced by New Age authors and gurus. Sure, Oprah has done some good things with her massive wealth, but countless unsuspecting souls following her and those like her are being led away from the One true God down a path of destruction. Do we care enough to warn them?

More on the New Age or “new spirituality” movement:

The New Age Paganism: Infecting the Church like Cancer by Bob DeWaay

Many Shall Come In My Name – author and former New Ager, Warren Smith on Understanding the Times
radio (interview)

The Daniel Plan and a Heaping Cup of New Age

Oprah’s at it again, declaring she’s a Christian

Video: Audience interaction on her show and Oprah denying Jesus Christ and the Bible on live TV

*Portions of the above are a re-post from 2013; originally published by Western Journalism