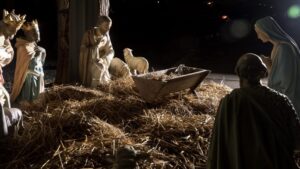 It comes as no surprise there has been a nearly universal change in public expressions of religious speech when it comes to something as simple as wishing fellow Americans a “Merry Christmas.” The most common thing we hear these days is the politically correct, “Happy Holidays” of course.

This took decades of programming. But does it really matter what we say when it comes to what we believe or celebrate? Have you ever thought about this, or have you just gone along with it?

The Bible states that “…the message of the cross is foolishness to those who are perishing, but to us who are being saved it is the power of God. (1 Corinthians 1:18) They cannot change history or erase the evidence of the resurrection, but they can try eradicating the impact the gospel of Jesus Christ once had in America. Sadly, they have had great success.

Just like they achieved in Europe, the Left in America wants to silence the church and create a completely secular society. Sadly, many Christians may not realize that enemies of God are more committed to furthering their ideas than believers are to the gospel.

If we won’t stay silent, the Left prefers we stay behind closed doors.

The activist mob has worked tirelessly to make the Christmas greeting a thing of the past. Government, public schools, and corporations for example, have long recommended using phrases such as “holidays” or saying “winter break” in place of Christmas break.

But the truth is that the hinge of history rests on the door of a stable in Bethlehem.

Think about the double standards. Humanists and progressives have injected repulsive sexual ideas and LGBTQ ideology into practically every aspect of public school curriculum and culture, and yet they claim to have a problem with saying the name of a federal holiday out loud.

Hollywood Democrats and those in charge of social media and the entertainment industry have also done their part. What do I mean?

In just 4 hours of television viewing last week, I took out my note pad and jotted down quotes and slogans from various TV commercials on different channels. Here’s a partial list of what I heard:

The holidays start with you, save on thousands of gifts for everyone on your list, all decorated for the holiday season, looking for the perfect present, epic holiday deals, ‘tis the season, we have a gift card for everyone on your holiday list, it’s a holiday spectacular, it’s the most wonderful time of the year, this holiday…”

They don’t call it Programming for nothing! We’re witnessing the decades-long whitewashing of the true meaning of Christmas and the purposeful dismantling of Christian influence in the public square. This isn’t merely neutrality towards religion, it is clearly hostility towards the only living God, Jesus Christ.

Surveys indicate the majority of people do not oppose mentions of Christmas, public displays or expressions of biblical history. Plus, it’s protected by the First Amendment.

Author and conservative radio talk show host, Dennis Prager says opponents of “Merry Christmas” know exactly what they are doing. They are disingenuous when they dismiss those who warn about a “war on Christianity.” Prager states:

I am a non-Christian. I am a Jew. Christmas is therefore no more a religious holy day for me than Ramadan. But I am an American, and Christmas is a national holiday of my country. It is therefore my holiday, though not my holy day, as much as it is for my fellow Americans who are Christian.

Lest you think I’m majoring in the minors, that it’s just more inclusive to give general holiday greetings, or the Left poses no real threat to our religious freedoms, evidence of hostility to the Christian worldview is increasing.

In the past five years, the Family Research Council analyzed a significant increase of violence and threats against Christian churches and pro-life centers in the U.S.

In the last four years alone, there have been more than 420 acts of hostility against U.S. churches including arson, vandalism, death threats, gun-related incidents, and more.

Still not convinced? Check out my article from a few months ago exposing the Biden Justice Department for turning a blind eye to pro-abortion terrorism. Democrats refuse to arrest a single arsonist or vandal in the more than one hundred documented cases across the country where pro-life pregnancy centers and churches have been attacked, vandalized, or firebombed.

These demonic forces show no signs of slowing down. Say “Merry Christmas” anyway.

Jesus warned that godless people would hate believers who follow Him and we’re seeing more open hatred toward people of faith today.

But I want to remind you of the good news. The true story hasn’t ended and there’s still time to be saved. The Word became flesh and Christ radically transformed human history.

If we could condense all the truths of Christmas into only three words, these would be the words: “God with us.” We tend to focus our attention at Christmas on the infancy of Christ. The greater truth of the holiday is His deity. More astonishing than a baby in the manger is the truth that this promised baby is the omnipotent Creator of the heavens and the earth!

Jesus is our Emmanuel! The Bible is true, He is returning soon, and Christ always will be the reason for the season.