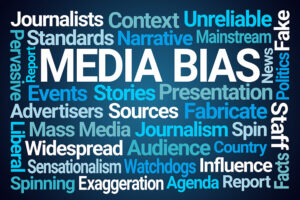 It’s not breaking news that people’s trust in today’s media is at a record low, but there are some key questions that should be asked about new survey results and the one-sided media in America.

What is eye-opening is the fact eight-four percent (84%) of Americans say the mainstream media is a danger to democracy, including a significant majority who believe the media’s bias and misinformation is a threat to our freedom.

The new Gallup poll also affirms just 34% of Americans overall have any trust in the mass media to report the news “fully, accurately and fairly.” The word “abysmal” comes to mind. By the way, thirty four percent is just two points higher than the all-time record low in 2016 when most media openly attacked Donald Trump while practically campaigning for Hillary Clinton.

“Notably, this is the first time that the percentage of Americans with no trust at all in the media is higher than the percentage with a great deal or a fair amount combined,”

Just seven percent (7%) of Americans have “a great deal” of trust or confidence in the media. One reason for this, as the poll notes, is an increase in the percentage of Americans (73%) who see too much bias as a “major problem.” How do the numbers look from a partisan perspective? Now this is very telling: 86 percent of Republicans view the media unfavorably – but not Democrats (only 22%). However, a whopping 70 percent of Democrats still trust the media. Stop. Shouldn’t this make honest, truth-seeking people question why this is the case?

For decades, Americans’ distrust of the media has constantly fallen along party lines. Why? I often suggest the root of the problem is the ideologically-driven, one-Party big-tech media conglomerate.

Democrats own all major purveyors of information across the country, they share the same godless worldview, and they overwhelmingly donate to Democrat candidates and liberal causes. But the problem goes even deeper.

These new poll results arrive around the exact same time another report from Newsbusters came out exposing Google for manipulating search results and burying Republican campaign sites in 83% percent of top U.S. Senate races. I am convinced the Democrat-run media influences elections.

The question is, to what extent?

“First, researchers caught Google red-handed by proving Republican campaign emails were sent to spam. Now we’ve uncovered Google manipulating search results to hide Republican campaign websites while promoting Democratic ones. This is all an effort by Google to help Democrats and interfere in the democratic process.”

Disturbing, yes, but not exactly a newsflash for those of us who have been paying attention. Just two years ago in 2020, I reported on what appeared to be indisputable proof that the Democrat big tech and mainstream media helped Biden but censored Trump.

You may recall that President Trump was censored hundreds of times on Twitter alone and was openly hated by most media while Biden was not censored once. Not once. Here we are two years later with major Biden-family corruption going unchecked. Many Americans are still asking, ‘where’s Hunter?’ Even some on the Left don’t agree with the ongoing cover-up.

If one of Trump’s sons was involved in the slightest hint of scandal, don’t you think nearly every media outlet would be all over it? According to the MRC, Biden is and was protected and coddled, but the so-called “reporting” on Trump was almost constantly 93% negative. This should speak volumes because what we’re seeing is communist policy – in a free America!

Another point of emphasis from recent polling is the two most important issues to voters: the economy and cost of living. What? Not nearly as concerning to most people are abortion (4%) and inequality/equity/inclusion (1%). LGBTQ ideology, green energy, climate change, college loan ‘forgiveness,’ and other agendas pushed by the Biden administration are apparently not on most people’s radar.

We’ll see next week how American citizens vote as we find out who gets elected and what party will hold majorities in the House and Senate. What we do know is the leftists in big tech, social media, and mainstream media are doing their best to control information to help Democrats. This is another reason why we need more true conservatives and people of faith to sound the alarm and flood the polls on Tuesday and vote biblical values!

Our nation is in decline and the church must have a sense of urgency! We are in desperate need of another awakening. The great Charles G. Finney (1792-1875) once declared:

“The time has come that Christians must vote for honest men, and take consistent ground in politics or the Lord will curse them… Christians have been exceedingly guilty in this matter. But the time has come when they must act differently… God will bless or curse this nation, according to the course Christians take.”

The media thinks political division and chaos in this country helps their cause so they keep stoking the flames. Let’s prove them wrong, and may God save America.