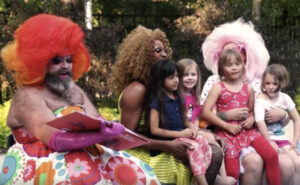 A lot can happen in fifty years. The drag queen phenomena – nowhere on people’s radar – has now become mainstream.  How did we arrive at the point that men – dressing up as women – are allowed to read to, interact with, and perform for young children? Drag Queen Story Hour (DQSH) is now celebrated as performances take place in bookstores, libraries, public schools, and tragically even in some so-called churches.

These “performances” are applauded by many parents causing many of us to ask, ‘Why would they go along with this?’

Part of the stated drag agenda is to disrupt foundational and traditional (biblical) beliefs about sex and gender.

This was once an obscure and hidden part of the gay subculture. Not anymore. Primarily homosexual men take on a drag queen persona, find a public space to work, act flamboyantly and often erotically, and are a common feature of pop culture.

But what kind of history is behind this agenda?

First things first: this is an overt attack on the image of God in mankind as well as a rejection of the truth of Scripture. We are witnessing acts of rebellion and debauchery, progressive efforts to not only ‘queer’ children but even seduce the church of Jesus Christ.

In his excellent article, “Drag Queens and the Queering of the Church,” M.D. Perkins writes that queer has become a label of pride within the LGBTQ+ acronym. Scholars began using the word to define radical social theories and the disruptive process of promoting non-biblical, non-traditional sexuality.

“Queering is intended to complicate and disrupt what is perceived to be normal; to directly challenge heterosexuality, traditional gender roles, or the male/female binary. …”Queering is one strategy for queer activists who want to unsettle or complicate normative practices…”

In other words, the demonic goal behind most drag queen performances is to use entertainment and emotion to move people’s perceptions in order to confuse binary depictions of sex and gender.

Drag Queen Story hour is also a nonprofit organization which helps them solicit donations and use its status to get into schools and claim rights to public spaces. Their website proudly states their mission is to reach children, “defy rigid gender restrictions,” and promote the idea that “everyone can be their authentic selves.”

Not who God created you to be, but whoever you imagine or identify as. It is a perversion of the truth, an extension of the ‘born in the wrong body’ philosophy, and obviously a blatant mocking of the God of creation. This is not new; they just found another way to do evil and to attract kids.

“But you, beloved, ought to remember the words that were spoken beforehand by the apostles of our Lord Jesus Christ, 18 that they were saying to you, “In the last time there will be mockers, following after their own ungodly lusts.” Jude 1:17-18

Innocent, impressionable children as young as toddlers are being targeted by DQSH.

This past summer, Fox News reported the fact the nonprofit now known as “Drag Story Hour NYC” received approximately $207,000 in taxpayer funding since 2018 from New York residents. It has yet to be determined how many other states have similar groups that send drag queens into classrooms and access schoolchildren as young as age 3.

A gay college professor, drag queen, Harris Kornstein, who performed some of the first readings in public school libraries not only wrote a children’s book but also sits on the board of Drag Queen Story Hour. In fact, the nonprofit has since expanded to 40 local chapters having put on hundreds of performances across the country.

The deception goes deeper. Another perversion of the truth is the fact drag queens are being advertised as “family friendly” to supposedly promote reading, tolerance, and inclusion. This is yet another example of redefining strategic words and meanings.

To “queer” something is to intentionally blur the lines of right and wrong, good and evil, natural and unnatural, male and female. Those who support this philosophy in public and vote for politicians who endorse its wickedness are what the Bible refers to as “participating” in their “deeds of darkness (Eph. 5:11).

In his incredibly extensive article, “The Real Story Behind Drag Queen Story Hour,” Christopher Rufo details the dangerous ideology driving the movement which he says was “born in the sex dungeons of San Francisco” and then incubated in academia.

Drag became political when the Stonewall riots of 1969 took place during the sexual revolution and drag performances became open forms of resistance to sexually “repressive” laws.

Later, the academic discipline of queer theory was born in 1984 to deconstruct and subvert the “sexual hierarchy” of married heterosexual people. By cultural influence and “a revolution of values,” they have worked successfully to soften and even tear down Western (read “Christian”) morality and biblical principles. 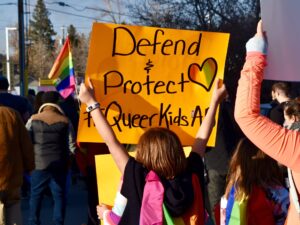 “The purpose, then, is to subvert the system of heteronormativity, which includes childhood innocence, and reengineer childhood sexuality from the ground up.

…The drag queen might appear as a comic figure, but he carries an utterly serious message: the deconstruction of sex, the reconstruction of child sexuality, and the subversion of middle-class family life.”

Remember the goal of these visual, entertaining drag performances is to obliterate traditional concepts of gender. Cutting to the chase however, one logical ending point of this deviant process is absolutely no restrictions on sexual behavior which, sadly will lead to the bottom of the perverse barrel: pedophilia.

Some laughed at those of us who warned about the slippery slope of denying God’s natural order, of normalizing homosexuality and then, legalizing same-sex “marriage.”

One radical in the 1990s, Judith Butler, further paved the way by mixing queer theory with post-modernism. She claimed that “once the premise is established that gender is malleable (changeable) and used as an instrument of power,” the next step is social reconstruction.

“it becomes unclear how to distinguish the real from the unreal. And this is the occasion in which we come to understand that what we take to be ‘real,’ what we invoke as the naturalized knowledge of gender is, in fact, a changeable and revisable reality.”

Now that more of us acknowledge the sheer mainstreaming of this evil in our culture, why would we be surprised to see it creep into the church? This ideology spread from underground to bookstores and libraries to the public schools which are fertile ground for “queering education.”

Until more concerned Christians, parents, pastors, voters, and political leaders understand the true, diabolical nature of DQSH and the ideology that drives it, it will be difficult to stop the enemy; to replace needed boundaries, common sense, and sanity. It will sadly be difficult to save the lives of countless young people and countless souls.

Jesus once warned about those who lead children astray that, “It would be better for him if a millstone were hung around his neck and he were cast into the sea (Luke 17:2)” than cause “one of these little ones” to sin or to stumble.

God is the Author of creation including mankind (Genesis 1:27-28), Jesus confirmed the established order of marriage between one man and one woman as well as the family (Mark 10:6-9), God calls it an “abomination” for a man to wear a woman’s clothing or vise versa (Deut. 22:5), and those who practice any sexual sin outside of biblical parameters will not inherit the kingdom of God (1 Cor. 6:9).

It is therefore astounding so many (professing) Christians have been silent or ignore these issues until it’s too late. What’s worse, too many church leaders fail to address sin and resist wickedness being played out right before their eyes. By avoidance or neutrality, we are not looking out for others and protecting vulnerable children.

Love cares enough to do uncomfortable things like warning others and telling them the truth! Repent of your sin, trust Jesus and become a new creation.

As M.D. Perkins said, this “false dichotomy between loving our neighbors and standing for righteousness needs to stop.” If you think they’ll stop at the door of our churches, you’re in for a rude awakening – and we will have to answer for how we responded in this pivotal cultural moment.