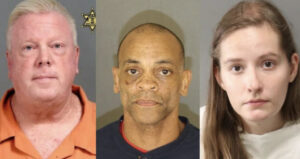 In an alarming and disturbing story you won’t hear reported by most media outlets in the U.S., hundreds of public school teachers have been arrested for child sex crimes so far in 2022. This equates to one every twenty-four hours.

According to a new report, in just the first nine months of this year, at least two-hundred sixty-nine (269) K-12 “educators” have been arrested. Is there any correlation with the graphic sex-ed curriculum or the fact a record number of teachers are homosexual, lesbian, bi-sexual, or transgender?

Parents, once again, you’ve been warned.

Democrat teachers unions have kept many of these cases under wraps while they continue demanding more taxpayer funding decade after decade. In fact, as federal funding increased through the decades, so has the amount of graphic, perverted, sex-ed content. Test scores however, have rapidly declined.

The analysis by Fox News Digital looked at local news stories featuring arrests of K-12 public school educators in school districts across the country. The scary thing is the fact many arrests involving teachers are not reported by the media which means the actual number of teachers arrested is likely much higher.

If this story was about the Roman Catholic Church or Evangelical Christians, it would be front page news across the country. But the leftist-controlled big tech media conglomerate will cover for one of its sacred cash cows: the Democrat Party’s government-run schools.

The number of teachers arrested for child sex abuse is just the tip of the iceberg — much as it was for the Catholic Church prior to widespread exposure and investigation in the early 2000s;

“The best available academic research, published by the Department of Education, suggests that nearly 10% of public school students suffer from physical abuse between kindergarten and twelfth grade.”

“According to that research, the scale of sexual abuse in the public schools is nearly 100 times greater than that of the Catholic Church,” he said. “The question for critics who seek to downplay the extent of public-school sexual abuse is this: How many arrests need to happen before you consider it a problem? How many children need to be sexually abused by teachers before you consider it a crisis?”

Excellent question! Apparently, the last time the U.S. Department of Education released a report on this problem was nearly twenty years ago.

At the risk of stating the obvious, these teachers are simply acting on sexual desires and sinful impulses that have been promoted and normalized by Hollywood, social media, school books and sexualized curriculum in the classroom.

A few quick examples of school predators include a former Michigan principal, elementary school teacher and coach who taught in multiple public schools and was charged with first-degree criminal sexual conduct and accused of sexually assaulting at least 15 boys during his education career spanning several decades.

A Texas middle-school teacher was investigated earlier this year following allegations of misconduct involving a student, but they let him return to the classroom. He was charged with two counts of indecency with a child by sexual contact and put on administrative leave months later when the district launched an investigation.

A Baltimore man was arrested last month, accused of impregnating a 14-year-old former student and having sexual relationships with multiple minors since 2009, including an 8-year-old student. The pervert has been charged with rape, numerous counts of second-degree assault, and various sex offenses.

Tragically, we could list more than one case for every day of the year and yet, most parents have no idea about these stories and how frequent they take place.

Amazingly, a report this past June, “Study of State Policies to Prohibit Aiding and Abetting Sexual Misconduct in Schools,” analyzed state policies that allow “suspected sexual abusers to quietly leave their jobs to possibly offend again in a different school district.” Part of the problem is only 19 states require employers to request information from an applicant’s current and former employers.

The great enemy of the salvation of man, in my opinion, never invented a more effective means of limiting Christianity from the world than by persuading mankind that it was improper to read the Bible at schools.

Remove God and anything goes. Maybe the Ten Commandments weren’t so bad after all!

The war against Christian values is not going to stop, and our children will remain the greatest target.

There are a number of possible solutions.

First, we better acknowledge how bad it’s getting instead of ignoring the problems or saying this could never happen in your town.

Second, understand the agenda behind the level of depravity and deviancy within the public school system, and remove your children immediately if you haven’t already.

For parents deciding to take the risk and keep their kids in public school, you must be active and engaged every single day. Teach them God’s Word at home and talk openly about every topic. Yes, every single topic.

Chris Rufo and others suggest school districts adopt a simple policy: pornographic and sexually explicit content must no longer be permitted in the classroom, school library, or online via a school-related source.

He says this common-sense, age-appropriate restriction is supported by 79% of the public according to recent surveys.

But the left refuses to retreat on radical LGBTQ propaganda.

Democrats in Virginia are pushing a new bill to give them power to put you in prison if you don’t affirm your child’s identity as a “non-binary,” “pansexual,” or “genderqueer.” That’s right, parents could face abuse charges for not going along with cultural delusion and affirming their LGBTQ child.

A teacher friend sent me a school district email recently encouraging teachers to celebrate LGBTQ History Month in their classrooms during October. You’ve heard of ‘queer all year,’ right? The programming doesn’t stop in June (Pride Month) and never did!

It’s no surprise according to a report, 42,000 minors were diagnosed with gender dysphoria last year! Since the data was based on insurance claims for “gender transition” treatments in the last five years, the actual numbers may be much higher.

These are consequences of rejecting God, redefining truth, ignoring biology and reality, de-valuing human life, and minimizing the agendas to indoctrinate children.

May God show us the best way to prepare and protect and equip our children to stand firm in Christ – as we lead by example in these battles. Let us remember that our Lord still reigns! In the midst of this spiritual war, He will provide strength, wisdom, and reminders of His presence as we trust His sovereignty!

We’re living in the midst of a crisis the corrupt have created and Christians must not be silent! I hope and pray you know how to respond to those who continue voting for and supporting this depravity.