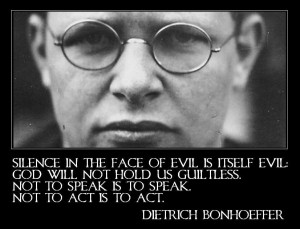 We have arrived at a moral and cultural tipping point in America and are in desperate need of a wake-up call. Let’s start with the spiritual. There are over 300,000 churches in this nation, but fewer people than ever are living out their faith. Atheism is increasing and only 2 percent of today’s young parents have a biblical worldview.

The influence of Christianity has steadily decreased while our culture has become secularized. Threats against true believers and hostility toward the God of the Bible is growing as the left has become emboldened. We may have reached our Bonhoeffer moment.

Our religious freedoms are under attack, and as the nation lurches further left and millions of Christians don’t vote in elections, some believe there’s still time to prevent the complete destruction of our nation. I’m not so sure.

Our decline began about a century ago, but in the last fifty to seventy-five years millions of religious citizens have lived their busy lives and have watched this country spiral downward in every way.

Sin is celebrated in public and as I’ve warned, evil is openly called good! The biblical literacy of Christians today is at an all-time low. Attacks on truth, free speech, and the Constitution however, are at an all-time high.

Like many of us, author of the new book Letter to the American Church, Eric Metaxas has been trying to send an urgent wake-up call to pastors and believers across the country. He believes that as Christians go, so goes America.

“It is the silence of the American church on a host of issues today that many people say, ‘Oh, that’s not a gospel-related issue. I don’t want to be divisive. I don’t want to be political.’ It is that silence which directly parallels the silence of German Christians in the early thirties, and it led to the satanic evil of the Nazi takeover of that culture where they crushed the church.”

Roughly a third of German pastors and churches compromised and were silent in the face of evil. Compromise helped enable the holocaust.

Metaxas also says if only another few thousand Protestant pastors had resisted tyranny and spoken out, the Nazis would not have succeeded. Drawing a parallel to America, much of what doomed the German church and nation is happening here and we don’t even see it.

“The only thing necessary for the triumph of evil is for good men to do nothing.”

Cultural Marxism has infiltrated the major institutions advancing wicked, leftist ideologies like abortion on demand, eradicating God, discriminating against Christians, softening socialism, and promoting transgenderism in public schools. Sadly, even some churches are playing along and endorsing ideas that are flat-out unbiblical.

Our own government is now openly hostile toward those who used to be protected by the First Amendment of the Constitution. Campaigns attacking so-called “misinformation” were launched.

Many of us have been censored, and Metaxas explains how his national radio show was wiped off YouTube because he dared address controversial topics. He adds:

“…suddenly people said, ‘Oh, you’re not allowed to talk about that.’ And I said, ‘This is America… People have died so that we can talk about anything freely.’ But a chill has fallen over this country and the church has been silent. And there are voices in the church advocating silence… [saying] just don’t be political.”

I often remind people that someone’s morality will be legislated by those who are elected and sent to represent we the people. And as we know the nation is starkly divided. Wouldn’t you prefer biblical morality, love and real tolerance rather than the godlessness, demonic, and intolerant policies that are being implemented by Democrat socialists?

The church’s silence is especially hurting young people in many measurable ways including confusion, depression, godless entertainment, sexual brokenness, and suicide attempts. Are you willing to trust Jesus, pray, speak up, stand for righteous causes, and vote?

At BlazeTV, the staff said there is a sinister left-wing agenda being carried out across the country. The FBI is making examples of peaceful pro-life demonstrators such as Paul Vaughn. He is yet another man of faith arrested by force and intimidated who faces up to 11 years in prison. The same tactics were used against Mark Houck.

Just weeks ago I reported on Biden’s Justice Dept. neglecting its duty and choosing not to arrest a single arsonist, vandal, or pro-abortion terrorist in the more than one hundred cases since May where pro-life pregnancy centers and churches were attacked, vandalized, or firebombed.

The Blaze stated, “Church and state” has been warped into “state VERSUS the church,” and claimed as of last week there have been no indictments “for the over 170 attacks on Catholic targets since May 2020.”

We can’t expect true justice from this current government, but we can call out injustice and refuse to be silenced. There are consequences when Christians take the path of least resistance. We must not ignore evil deeds of darkness but instead, expose them (Ephesians 5:11).

People need to dust off their Bibles and America needs to dust off the Constitution. Midterm elections are coming up and demonic policies are being debated. Are you in our out? At this point in our history, the choice is still ours what we do with the time we’ve been given.

Every 24-Hours A Teacher is Arrested for Child Sex Crimes
Report: Google Helps Democrats, News Media a Threat to Freedom