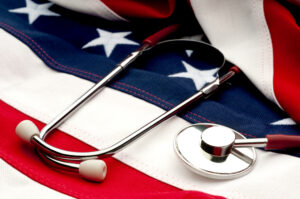 Hundreds of healthcare workers who were fired for refusing to take the injection just won a major case. We’re talking about a $10.3 million settlement in the nation’s first-of-its-kind classwide lawsuit. Liberty Council settled the suit on behalf of Illinois healthcare workers who were unlawfully discriminated against and denied religious exemptions from the Charlie-Victor-David Ten-plus-niner jab mandate. (smile)

We’re not supposed to talk about this or anything that goes against the global government and liberal media narrative; but we must. After all, it’s our freedom we’re talking about.

Inflexible mandates and medical tyranny lose. Religious freedom wins. The damages to be paid out from the suit include front pay, back pay, attorney’s fees, and punitive damages.

The settlement last Friday, which is the first major victory with likely more to follow, came against NorthShore University HealthSystem on behalf of more than five hundred current and former employees.

This should be front page news in every serious major media outlet. Sadly however, it isn’t widely reported because the truth can be quite inconvenient to agenda-driven leftists. The Biden administration, the one-Party big tech media conglomerate, and Hollywood promoted the shot as the only acceptable solution to the virus.

Some people will never consider new information or admit they’re wrong let alone take responsibility.. Conservatively, according to reporting site, Open VAERS, tens of thousands have died after taking the jab and over a million have had related side affects and injuries. There’s certainly blood on someone’s hands.

Liberty Counsel VP of Legal Affairs and Chief Litigation Counsel Horatio G. Mihet said the settlement will “bring a strong measure of justice” to employees “who were callously forced to choose between their conscience and their jobs.”

“This settlement should also serve as a strong warning to employers across the nation that they cannot refuse to accommodate those with sincere religious objections to forced vaccination mandates,”

The settlement must be approved by the Federal District court, but there is much good news in this case.

First, according to Liberty Council, not only will there be financial compensation, but the healthcare system will change its unlawful policy of “no religious accommodations” across its many facilities. Second, unvaccinated employees (with approved religious exemptions) in any NorthShore facility will no longer be prevented from accessing any company position.

Third, great news for those who want their jobs back. For employees who were terminated because of their religious refusal of the Charlie-Victor-David Ten-plus-niner shots, they will be eligible for rehire if they apply within 90 days of final settlement approval by the court – and they will retain their previous seniority level.”

Finally, the lead plaintiffs in the suit (thirteen healthcare workers) will also receive an additional approximate payment of $20,000 each for their role in bringing the lawsuit.

It often just takes a handful of freedom-loving citizens to stand up, resist, and fight.

Mat Staver, Founder and Chairman of Liberty Counsel commented on how huge this case is because the settlement not only provides compensation, but also the opportunity for some to return to work. Staver also stressed the importance of our religious freedoms and cautioned other companies:

“This settlement should be a wake-up call to every employer that did not accommodate or exempt employees who opposed the COVID shots for religious reasons. Let this case be a warning to employers that violated Title VII. It is especially significant and gratifying that this first classwide COVID settlement protects health care workers.

Staver also emphasized the fact America’s health care workers are heroes looking out for their patients and that they are needed now more than ever.

Of course, the FDA said late last week the Biden administration is plowing forward with plans to launch a Charlie-Victor-David ten-plus-niner booster shot campaign in September. Moderna and Pfizer plan to start clinical trials for boosters.

This all comes just a week after a proudly vaccinated and boosted President came out of isolation after testing positive for you know what – and insisted Americans wear face masks, get shots, get boosters. We can only hope more informed citizens will ignore the faulty science the “experts” and big pharma have been peddling.

Globalists saw how much they were able to get away with and had the support of a complicit media and a White House fueling fear, silencing debate, and censoring information. we’ve never seen anything like it in our nation’s history. Time will tell if people have learned anything from the past few years of power elites infringing on our freedoms, shutting down economies, and making the pandemic much worse than it needed to be.

Here’s hoping the good news in this historic case is just the beginning.