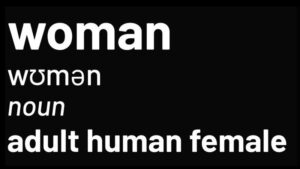 I pray more people are asking the question, ‘How can you trust a person, especially someone in any leadership position, who cannot speak the truth about the most basic facts of life and humanity?’ Why should we believe them or accommodate their delusion?

First, the Church of England says there is no official definition of a woman. Second, a man, Lia Thomas, was just nominated by the University of Pennsylvania as the 2022 NCAA Woman of the Year, third; The National Women’s Law Center refuses to define “woman;” and fourth, the NEA recently proposed changing the term “mother” to “birthing person.”

Sadly, I’m not making any of this up. Recent history will go down as ironic, moronic, or just simply baffling.

We’ve seen a leftist Supreme Court justice unable to say what a woman is during her own Senate confirmation hearing, a radical Democrat socialist say “the hell with the Supreme Court” after the overturning of Roe V. Wade and added, “women are going to control their bodies no matter how they try to stop us,” and, 1972 U.S. Olympic Decathlon winner, Bruce – now ‘Caitlyn’ Jenner say men should not be able to compete in women’s sports!

Confused? It’s difficult to predict how far this will go, but there are no clear signs of the celebration of moral relativism ending anytime soon.

When the Church of England was recently asked what its definition of a woman is, they responded by saying there is “no official definition” because recent developments required “additional care” when attempting to define the word. What?

Senior Bishop Robert Innes said the definition of a woman used to be “self-evident” but no longer had a simple answer. Has he read the Bible? This is what happens when religious leaders abandon the fact that Scripture is inerrant and literally God-breathed, written by men but spoke through the Holy Spirit.

The world is in trouble when a news personality in Great Britain is more in touch with truth reality than church leaders. Calvin Robinson argued that providing a clear answer should not be difficult.

“The definition of ‘woman’ is not a complex moral problem,” he said. “It is a scientific and biblical truth.

Next, in a Senate Judiciary Committee hearing last week, the president of the National Women’s Law Center was unable to define the word “woman.” During a discussion about abortion and the overturning of Roe v. Wade, Fatima Goss Graves answered by deflecting, “I am a woman, that is how I identify,”

The NWLC leader then went on to assert that people other than women can get pregnant and that the representative’s question is silly because it undermines this apparent reality.

“But I wonder, however, if in part the reason that you’re asking the question is that you’re trying to suggest that people who don’t identify as women can’t get pregnant,”

One key takeaway from recent events is this apparent stumbling block for leftists. Simply answering basic questions about biology and so-called gender identity has them rattled. We’ll see how the voting public responds in November’s Midterm elections.

I hope you watched or read about the alarming exchange last week between Senator Josh Hawley and radical Democrat UC Berkeley law professor Khiara Bridges. Hawley was accused of being “transphobic” and causing violence to transgender people for simply asking if women can get pregnant. The exchange is nothing short of astounding.

“…I want to recognize that your line of questioning is transphobic … and it opens up trans people to violence by not recognizing them,”

The college professor also declared that Senator Hawley was “denying that trans people exist and pretending not to know that they exist.”

Finally, we had an idea this was coming, but swimmer, Lia Thomas has now been nominated for the 2022 NCAA Woman of the Year award. This just a few years after competing as a male and after the past season he competed with women and became the first male-born athlete to win a Division I women’s title.

You can sort out the logic, but we’re talking about the university level here. The culture-conforming NCAA stated the honor “recognizes female student-athletes who have exhausted their eligibility and distinguished themselves in their community, in athletics and in academics throughout their college careers.”

Any predictions where this might be headed? When we’re living in a Romans 1 society and are seeing evil being called good even in many churches, you know we’re in trouble. The good news is nothing is really “new” under the sun and God is fully aware and in control of all things.

Presidents and Progressives Don’t Get To Redefine Christianity
Gallup: Belief in the Inerrancy of Scripture Rapidly Declining