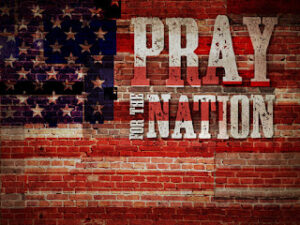 If you love your country, value freedom, and believe the Bible, you may now be the new scapegoat as enemies of the one true God have stepped up their game. How? By associating Christians and conservatives in America with cultural chaos, division, hate, religion, and anything currently frowned upon in a woke society.

We are the problem, a menace – and the media has received its talking points from the Obama Biden Pelosi Schumer Democrats.

For example, over on The (Liberal) View recently, the worldly women engaged in a one-sided conversation demonizing God, guns, and “Christian nationalism” which ignited a debate too important not to address.

We must understand the war of words has recently progressed to alarming levels. This modern method of warfare is dangerous and irresponsible but sadly, we’ve come to expect that from progressives in power and from the ladies on the View.

Those violent Bible thumpers! She just lumped guns, religion, and Trump supporters together in what they see as a toxic stew – to the gleeful approval of the audience.

Few are asking what’s wrong with living by true biblical principles? I’m not justifying what hypocrites and posers do when they use religion for violence or take Scripture out of context. The point is if you’re a Christian, supporter of the Second Amendment, conservative, Republican, Trump voter, or lover of freedom, you’re now in that camp of “violent Christian nationalism.”

Whoopi Goldberg chimed in and seemed to declare that racist white Christians historically used the Bible to justify mistreating black Americans, especially down south. She said it’s always been this way. In her words,

Those who are ignorant to what Scripture teaches might hear that and think the Bible is racist, but God is clearly no respecter of persons and shows no favoritism. We need to clarify this point for a moment.

The book of Galatians states:

As believers, our actual identity is in Christ no matter where we are from or who our earthly family is. In the Book of Acts, Paul affirms that God Himself gives life and breath to all things and we are of one blood and one race; human:

He made from one man every nation of mankind to live on all the face of the earth, having determined their appointed times and the boundaries of their habitation, 27 that they would seek God… (Acts 17:26-27)

Whoopi also said she’s sick of this, of kids being shot. Nineteen children died in the Texas shooting they were referencing. And yet, very few mention the fact every weekend in major inner-cities across America, hundreds are shot and dozens die – in places that have some of the strictest gun laws on the books.

In Chicago two weeks ago, 51 people were shot over Memorial Day weekend, the most violent in five years. Does this make national news? No. Why not? It doesn’t fit the narrative.

What did Joy Behar say about the issue?

“Once Black people get guns in this country, the gun laws will change. Trust me.”

So black people do not have access to guns and are not committing any crime in these cities? This is complete ignorance of the truth but Joy and the others rarely allow facts to get in their way of entertaining commentary.

Back to this idea of Christian nationalism. Unjustified accusations and labels can be unfairly used to deceive and divide people as well as target a certain group. Marching orders are issued which often triggers an emotional response from social justice warriors.

Since we have no idea how Christian nationalism is defined,’ let’s first define what ‘Nationalism’ means. According to Got Questions:

Nationalism is a sense of loyalty and commitment to one’s country. It includes belief that the country ought to self-govern, pursue self-interests, and encourage shared cultural attributes. …Appreciation for one’s culture, language, traditions, music, history, or achievements is a fine thing. The same holds true for efforts to sustain those legacies.

Believers are called to shine the light of Christ and be as salt to preserve and flavor society. Critics of faith and freedom can’t stand this, and now use “Christian nationalism” in derogatory terms when there is any connection between a person’s faith and his or her political views.

The Bible explains what’s behind this.

For everyone practicing evil hates the light and does not come to the light, lest his deeds should be exposed (John 3:20).

The American left has a problem with those who hold a biblical worldview and shine the light of Christ. Time magazine recently published a story with this headline:

Christian white supremacy. The essence of their rhetoric is that straight, white, American men are at the root of the violence we are experiencing as a nation. (See Black Lives Matter Global Network Foundation riots)

The use of language to demonize the opposition is communist policy. Accusations of Christian nationalism, hate, homophobia, intolerance, bigotry, racism, sexism, and violence are increasing. This is of course, part of the progressive propaganda campaign to marginalize and discredit believers in Christ.

These labels are used as weapons and the strategy is nothing new. In 1943, here’s part of a directive from Communist Party headquarters to their followers in the USA:

When certain obstructionists become too irritating, label them after suitable buildups as fascist or Nazi or anti-semitic, and use the prestige of anti-fascist and tolerance organizations to discredit them. In the public mind, constantly associate those who oppose us with those names which already have a bad smell. The association will after enough repetition become fact in the public mind.

To the Left, true believers in Christ are the irritating obstacles. The rhetoric is noticeable from big tech and social media to the mainstream Marxist media and corporate world to the Biden Harris White House and countless Democrat disciples of Humanism.

Remember how the Left used what happened at the U.S. Capitol to label all Trump supporters and those who disagree with Joe Biden as extremists and domestic terrorists? Report after report declared the January 6, 2021 “insurrection” was the same as Pearl Harbor or the 9-11 terrorist attacks on America. Kamala Harris and the Democrat media elites used the exact same language – on the same day.

Media outlets were given marching orders and used the same talking points which proves they thought this through. Their agenda to frame the “opposition” as dangerous is now having impact.

The D.C. Capitol building was fenced in and the National Guard was posted for months last year. Was it just a side-show? If not, then they were supposedly protecting the country from – you. That is, IF you are a Trump voter, Republican, pro-life, pro-family, conservative, or Christian.

Just because there were some flags, banners or Christian symbols present at what was predominantly a freedom rally for election integrity doesn’t mean the left can put everyone in one big “basket of deplorables.” As I was editing this article, the news broke about an armed California man arrested near Supreme Court Justice Brett Kavanaugh’s home Wednesday shortly after 1 AM. He was reportedly there to kill the Justice for siding with pro-lifers on the Roe V. Wade case being decided. Irresponsible rhetoric had apparently triggered the man into taking “justice” into his own hands.

Confirmed by the Supreme Court, Nicholas John Roske, 26, was arrested and later charged in Maryland federal court with attempting to kill or kidnap a US judge, court records show. Roske was dressed in black, had a backpack of kidnapping materials, suitcase and was spotted by U.S. Marshalls getting out of a cab in front of Kavanaugh’s home.

These activists posted a map with the home addresses of (conservative) Supreme Court Justices, Is that the kind of thing this president wants…?

Ready for the response from WH Press Secretary at the time, pro-choice Psaki?

The reason people are protesting is because women across the country are worried about their fundamental rights.

The Bible refers to this so-called “right” as murder. Talk about a telling ‘non-answer.’

You might not recall two years ago, Senator Chuck Schumer threatened Brett Kavanaugh from the steps of the Supreme Court and encouraged protesting at justice’s homes. So this week, a draft of the Roe V. Wade opinion is leaked from the Court, a lunatic shows up with evil intent, and none of it is connected? At the time, Schumer proclaimed:

“…I want to tell you, Kavanaugh, you have released the whirlwind! And you will pay the price! You won’t know what hit you if you go forward with these awful decisions.”

“The Justices are protected… nobody is in danger over the weekend”

Nothing to see here. It’s called hypocrisy. We all know the response from the left would be front page news 24/7 if there was a threat to a liberal Justice. Can you even imagine?

So, with the help of the one-Party big tech media conglomerate, biblical morality and godliness is no longer tolerated while evil is being called good – and protected.

Finally, the uber-liberal Associated Press published an alarming article stating Christian nationalism is “on the rise in some GOP campaigns.” Their aim was to discredit and attack Republicans who recently won primaries and shame conservative, patriotic voters.

Doug Mastriano, who calls the separation of church and state a myth and has referred to the Bible in speeches, won Pennsylvania’s Republican gubernatorial primary last month. Georgia Republican Marjorie Taylor Greene talks about being “a watchman on the wall” against those seeking to “destroy our faith.” She easily won her primary.

The article takes issue with pastors Jack Hibbs, Tim Thompson and others who are vocal, standing for religious freedom, biblical values, and hoping to influence elections by encouraging believers to be engaged politically.

We’re not talking about wrongly idolizing our country or the Flag, and we are not endorsing movements claiming to ‘take back’ America including government, the culture, Hollywood, or the education system (Christian Dominionism).

Language sure is important. The claims of Christian nationalists ‘taking over America’ are not only unprovable, but blatant, purposeful lies. Moreover, instead of celebrating “Pride” and perversion, we should be encouraging hard-working Americans who are striving to live according to biblical values, not criticizing and denouncing them as the left does.

The article concludes with a statement explaining that ‘Christian nationalism’ is the,

“gasping, dying breath of the older generation in America that is afraid that Christians are going to be replaced,”

Lefties can’t wait for aging patriotic citizens to die off so fewer and fewer people remember this nation’s true history. They are also in denial of the overwhelming evidence proving there has been an agenda to eradicate God and biblical Christianity from the public square.

A caution to us, however, is to not be in denial ourselves about the war on Truth and the biblical worldview as well as the decaying condition of our country. We must recognize the deception, spiritual warfare, and the battles being waged all around us. If you’re pressing on in the faith, keep hoping, working and praying because the testing of our faith produces endurance.

And after having done everything, stand.