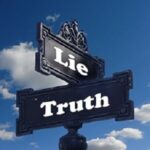 It is astounding, really. The left controls or is partnered with the liberal media, big tech, the “education” system, corporations, Hollywood, and government. And yet, their policies are so unpopular that they cannot draw critical-thinking, informed people to support them. Their solution? Censor, silence, and punish the opposition.

The power-grabbing Biden White House is launching a ‘disinformation governance board,’ to keep American citizens in line. Just as bad, to head-up the agenda, they appointed Nina Jankowicz, a woman who has literally herself spread lies, um, I mean, ‘misinformation.’ How exactly will this self-governing “Ministry of Truth” operate?

According to Politico, the DHS established the Disinformation Governance Board to “coordinate countering misinformation related to homeland security, focused specifically on irregular migration and Russia.”

On her Twitter account, Nina Jankowicz said she is “Honored to be serving in the Biden Administration @DHSgov and helping shape our counter-disinformation efforts.”

Counter-disinformation efforts. Are we awake yet? Radicals in power now openly announce their plans and further their agendas with the use of taxpayer dollars.

You might be asking how in the world is Jankowicz qualified for this government position? The thirty-four year old sings show tunes on social media. In 2020, Jankowicz participated in a virtual Congressional hearing on “misinformation and conspiracy theories online.” And guess what the left considers “conspiracy theories”? One more guess who the left labels as ‘dangerous.’

Let’s put this another way. The most anti-First Amendment administration in U.S. history is openly using federal funds and the power of government to promote censorship of those who do not align with progressive Democrat socialist narratives. Let’s be clear: this is what a government does to its foreign enemies, not to its own citizens!

Rather than help millions of citizens struggling with inflation and rising prices, rather than work to solve skyrocketing mental health issues, rather than defending our southern border and protecting Americans from the cost and concern of illegal immigration, rather than reign in massive out-of-control government spending, Democrats are working to silence its political opponents.

Tucker Carlson is right that the Biden Democrats cannot continue controlling this country if people have free access to factual information. They don’t want fairness or justice, they want power. But in the face of such an invasive attack, this is the point we must draw the line.

In one of his classic monologues, Carlson stated:

“They are using law enforcement powers to identify and punish people who think the wrong thing; That would be opponents of the Biden administration. Joe Biden’s partisan political enemies are now officially enemies of the state.”

The Ukraine connection sure is interesting, but nothing for the media to follow up on, of course. Who knows what else they’d uncover if they actually served the people and pursued the truth.

The same global socialists who deemed churches ‘nonessential,’ pushed the ‘Rona’ lockdowns, downplayed election fraud, activated the FBI against parents at school board meetings, and support Ukraine’s liberal government will now use the Dept. of Homeland Security to control free speech.

What’s ironic is Biden’s new director, Nina Jankowicz is a Ukrainian government advisor who promoted and applauded the media censorship of facts involving Hunter Biden’s hard drive. She has championed the suppression of stories containing reports of Hunter’s foreign business deals with countries such as China, Russia, and Ukraine. She has also faced criticism for past remarks about America being “systemically racist.”

Republican Senator Josh Hawley warned that this new disinformation board will “marshal the power of the federal government to censor conservative and dissenting speech,” saying the choice of Jankowicz to lead the new board is troubling given her “long history of partisan attacks.”

“This is particularly ironic given Jankowicz’ extensive criticism of free speech and the First Amendment; …Jankowicz has claimed that the ‘free speech vs. censorship’ framing is a false dichotomy. And when Elon Musk announced his acquisition of Twitter, she said, ‘I shudder to think about if free speech absolutists were taking over more platforms, what that would look like for the marginalized communities…”

Nina Jankowicz once claimed that Trump supporters would bring weapons to the polls to intimidate voters. Hawley sent DHS Secretary Alejandro Mayorkas a letter demanding the board be dissolved immediately.

Since Democrats appear to be losing popularity with blacks and Hispanic voters, Mayorkas said last week that a focus of the new board would be to stop the spread of election “misinformation” – particularly in minority communities. Consider shots fired across the bow of the approaching Midterm elections.

Another Senator, Tom Cotton referred to the new “Orwellian” board as a disgrace, pointing out this is being unleashed “during the worst border crisis in history,” and is led by a “partisan Democrat.” 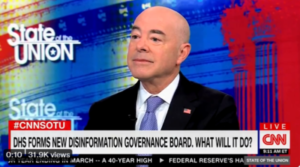 But Mayorkas himself appeared on the censorship-approving network, CNN, and insisted the disinformation board will be “absolutely” neutral. This is around the exact same time CNN’s media analyst, David Zurawik called for more social media regulation.

Wisconsin Senator, Ron Johnson stepped up to the plate calling Jankowicz a “beacon of misinformation online,” saying she has furthered false media narratives. He sent a letter probing Secretary Mayorkas with questions including:

“The fact that a federal department with approximately 240,000 employees would set up a ‘Disinformation Governance Board’ to enforce the government’s judgement of what information is allowed in the public square should frighten anyone who values liberty and understands how crucial free speech is in maintaining that liberty;”

Emphasis on enforcing what this far-left government decides is permitted speech.

To be fair, don’t think all Dems are on board with the communist policy of censorship and propaganda. Some openly oppose these extreme measures. Former Hawaii Congresswoman, Tulsi Gabbard (a Bernie Sanders supporter) says this is what you see in dictatorships. The radical left is revealing exactly who they are and they’re afraid of truth getting out. They’re afraid of informed American citizens.

“Every dictatorship has a propaganda arm—a ‘Ministry of Truth.’ The Biden Administration has now formally joined the ranks of such dictatorships with their creation of the so-called ‘Disinformation Governance Board,’”

Let’s not forget or ignore the sad reality of the horrifical state of the southern border where more than a million illegals have made their way to neighborhoods across the country under this administration. As a result, and you do not hear this from most Democrat media, cases of kidnapping, extortion, sex trafficking, drug abuse, gang violence, looting, and other crimes are rapidly increasing due to Biden open border policies.

Estimates by The Federation for American Immigration Reform show the illegal alien population ballooning under the O’Biden administration. The taxpayer burden of caring for, feeding, schooling, sheltering, and incarcerating migrants is now over $143 billion a year!

For those paying attention, this brings the national overall total of illegal aliens to 15.5 million.

So what can we expect from this new calculated political move? It appears their plan is to further limit and suppress free speech and civil liberties. 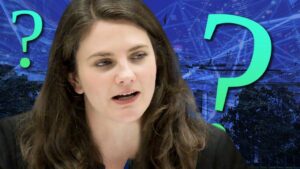 And Nina Jankowicz, the head of this propaganda wing has recently called for increased content moderation from social media platforms, and more state-funded, Democrat-controlled “journalism.”

Leading up to the 2020 big election fraud, Jankowicz singled out stories about Joe Biden and his son’s confirmed connection to Ukrainian energy company Burisma, claiming it was Russian “disinformation.” How? Due to increased “information laundering…” At the time, Nina called it a well-known “nexus of conspiracy theories related to Ukraine and Vice President Joe Biden…”

Lying is nothing new for politicians. Open bold-face lying however, is new to America, and I hope enough people are paying attention rather than choosing to be entertained, distracted, or too busy to care.

Too many people keep trusting the monitors and controllers of free speech, and  the judges of what is deemed to be “disinformation.” Who knows if they’ll keep getting away with this kind of political warfare, but it will be interesting to see how they shut down or stop over 75 million voters.

Sadly, with all that’s going on in our country including a tanking economy, record high drug and mental health issues, and now millions of illegal aliens from around the world pouring across the Sothern border, apparently most Democrats (and some Republicans) have no intention of solving real problems or protecting its own citizens. They instead chose to police our already suppressed speech, attack our freedoms, and spend even more taxpayer money to do so.

Those in power and their big tech/media allies do not accept the principle of free speech let alone religious freedom.

The solution? Pray, speak-up, and vote. Now is the time to take a stand, so vote out of office those who advance or endorse these communist policies.

It should cause us to wonder what they’re hiding, what “crisis” is brewing behind the scenes, and what they’re planning to do next.