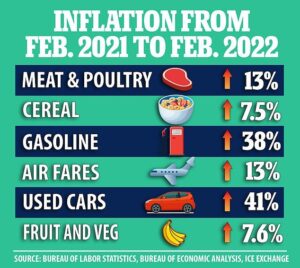 It seems liberal Democrats and their big tech, media allies have succeeded at instilling fear in people’s lives and deceiving people about many things. The price of panic is at all-time highs. So are cost of living increases since Joe Biden took over the presidency.

But you’ll rarely hear the media pointing to his administration. That’s right. Today’s problems are the fault of President Trump or Vladimir Putin. I wish I were joking.

Inflation is at a 40-year high of 8.5% due in part to federal policies including the printing of money at disturbing levels, bad energy policy, and being overly generous with countries that hate America. Bottom line: people have been feeling the financial pinch.

“You won’t have to worry about my Tweets when I become president.”

Wow, what a relief! Things are so much better. Pardon the sarcasm and look at America’s economy, its corrupt government, censorship, medical tyranny, our schools, the gender surrender and delusion, culture of death, complicit media, and our military, for starters. In just the last year, we have 13% increase in the cost of meat and poultry, increases in produce, and a 38% increase in gasoline.

You’ve seen the “Help Wanted” signs, and you’ve likely seen small businesses – the backbone of strong communities – cut way back or even close down. You’ve seen the skyrocketing gas prices and home energy costs. Taxes are increasing. Even according to the progressive AP (Associated Press), inflation has soared in the last 12 months resulting in the biggest spike since 1981.

Some try and argue, as the O’Biden administration and Democrats in the media insist, this is all the result of Vladimir Putin and his attack on Ukraine. WH Press Secretary, Jen Psaki calls the current economic crisis, “Putin’s price hikes.”

Let’s analyze some numbers. Take a look at this graph on the Consumer Price Index: 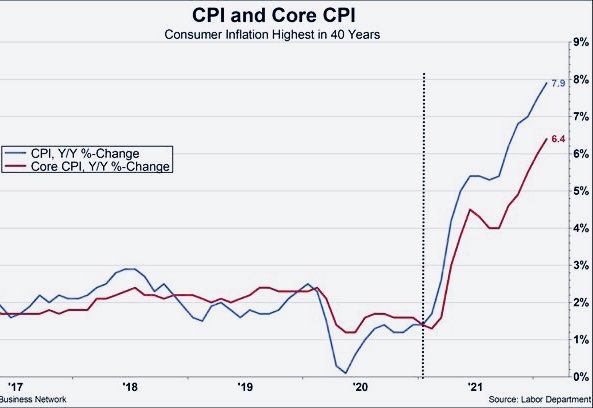 Do you see that dotted, vertical line between 2020 and 2021? Shortly after that marker, in early 2021, the dramatic upward spike began. Why is this significant? That was after former VP Joe Biden was inaugurated and his Party was granted the power of the White House.

What were some of the first things he and his corrupt colleagues did? They shut down the Keystone Pipeline and had the Federal Reserve print more money so Biden could hand out record numbers of Covid stimulus checks.

By the way, even if the left wants to spin unemployment numbers to appear low, remember a few things. Many people are no longer looking for work or are working part time, others work from home.

Bottom line: under Bidenomics, even ‘low unemployment’ is meaningless when inflation causes our paychecks to be worth much less.

“The Left is no more bothered by high inflation than by high taxation — as both undermine the private economy and make it easier to finance big government.”

This isn’t a matter of old Joe Biden not having the business sense President Trump has. This is a matter of a progressive ideology within the Democrat Party aiming to weaken the American economy. Basically, it is a war on Capitalism and free markets. And too many of these global socialists seem content to watch American citizens suffer.

The Left talks often about compassion. So, where’s theirs, especially toward low-income households and those in the inner cities, many of whom were already struggling?

Sadly, but not surprisingly, the Democrat narrative appears to be working and convincing uninformed Americans including low-information voters.

Reporting on an ABC poll, the Daily Caller says a large majority of Americans blame high gas prices on Russian President Vladimir Putin. Not that we should trust the accuracy of practically any media poll, but… 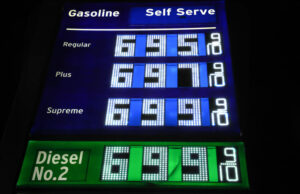 A whopping 71% of respondents blamed Putin “a great deal” for the high costs at the pump while another 68% blamed Big Oil for the prices, echoing another Democratic talking point.

Putin and oil companies are the problem? Wait a minute. Numbers, please! According to Energy Information Administration data, Russian oil and petroleum imports represented just 2% of total supplies to the United States in 2021!

The propaganda, however, is working. It just happens to be hurting people and causing the nation to head down a dangerous road as the left uses another crisis to push its agenda.

Common sense would lead us to ask why is the public support for Biden so low? Another poll, this one from CBS, seems to indicate the Biden administration is a sinking ship.

Only 37% of Americans approve of the Democrat Party’s handling of the economy, while 63% disapprove. The lowest marks are for how they’re handling inflation, as 31% approve and 69% disapprove. Biden’s approval rating is the worst CBS News has ever registered.

But it doesn’t matter because registered Democrats will likely vote in the next election for whoever has a “D” in front of their name. That, my friend, is idolatry. And I’m not suggesting it doesn’t happen to Republicans as well, but if you strive to live according to the biblical worldview, there is a stark contrast in morality between the two main political party platforms.

The choice should be obvious. But it’s not that simple. It’s often human nature to hang on to things that aren’t good for us or to change old habits, even if we are conflicted about them and our actions contradict our professed beliefs.

Things will likely grow worse before improving, if they ever really do, but as believers in a bright future (due to our sovereign God), we know He is our ultimate hope and provider, not government, and certainly not the things of this world. He is faithful and promises to meet all our needs according to His heavenly economy (Phil. 4:19).

Let’s trust the Lord in all things and keep it in perspective.