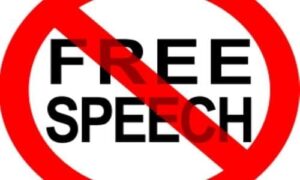 At least four news stories last week expose how the Biden Harris administration plans to handle what they are calling ‘misinformation’ on social media. That’s right. Not only are Democrats defining ‘dis’-information, but the federal government is pressuring big tech to censor those with differing views.

If you disagree with and oppose state-approved opinions, policies, and propaganda, and posted something on-line, you may soon be punished. Cancel culture is alive and well as Democrats in government are working with the big tech/media conglomerate to advance their agenda while silencing dissent.

Reports indicate the federal government has gone out of its way to clarify and define what they interpret as disinformation, misinformation, and extremism.

First, two U.S. Senators introduced a bill that could criminalize First Amendment rights, while the U.S. Surgeon General formally demanded tech companies turn over data on organizations and individuals who post “COVID-19 misinformation” on social media platforms. More on this in a minute.

Since there’s so much to cover, here are headlines having a common theme – from four different sources:

There’s a common theme here, isn’t there? There is in place, a U.S. administration that is getting away with bullying, big government control, and power grabs. They intend to censor American citizens under the guise that ‘it’s for their own good.’

We’ve seen this implemented over the last two-plus years. ‘Shut-up and like it.’

You may have heard about Joe Biden’s State of the Union address, otherwise known as the Democrat Rose-Colored Glasses View of the ‘Never Been Better’ and ‘More United than Ever’ USA. He referred to the misinformation of those opposing administration policies as “an urgent threat to public health,” and said the government’s request for information is part of the “National Covid-19 Preparedness Plan.”

“In addition to demanding misinformation data from the tech platforms, the surgeon general called on healthcare providers and the public to submit information about how COVID-19 misinformation has negatively influenced patients and communities.”

For obvious reasons, many of us have been joining or using new social media platforms and services. I’ve been using search engine, DuckDuckGo, considered an alternative to Google, who has suppressed or censored Christian and conservative views and search results for well over a decade.

In fact, we now know Google acted to censor what it considered fake news and demonetize “climate denial” information. Facebook has shadow-banned many of us for years, suppressed the biblical view of gender and sexuality, and recently has upped its alleged “fact checking’ in the area of climate-related posts. Twitter and YouTube have also followed suit.

So I was disappointed to hear DuckDuckGo announce it will be “down-ranking” sites associated with “disinformation,” and adding “information boxes” to promote or “highlight quality information.” This naturally received backlash from DuckDuckGo supporters.

Its CEO, Gabriel Weinberg defended the decision by saying the point of DuckDuckGo was to provide users privacy, not display unbiased search results.

Breitbart reports Weinberg is basically using the same methods Google and other big tech giants used during the 2020 election cycle to help Democrats, and during the manufactured coronavirus pandemic to push official government narratives and policy.

As stated by many, those “narratives” and information changed regularly and sometimes drastically to the point we the people didn’t know what to believe. This, at a time when trust in mainstream media is at an all-time low.

One thing we can say is generally accurate: when the left refers to something as conspiracy theory or ‘misinformation,’ take a closer look because it is often – not always, but often true. Either that or the alleged conspiracy theory is no longer a theory.

Another area of concern to Democrats is American citizens who want to preserve their country and fight for the Constitution to be upheld. Therefore, the White House saw it necessary to redefine extremism to serve their purposes. Meaning they want to legally punish their opponents.

On the issue of immigration for example, here’s some factual information the Biden Harris Democrats don’t want people to know: https://www.thegatewaypundit.com/2022/03/mayorkas-releases-new-rules-extremism-dhs-will-target-anyone-believes-election-stolen-challenged-faucis-everchanging-covid-rules

So let’s be clear. Instead of enforcing immigration laws and closing the southern border, Biden’s DHS instead released new rules on “extremism.” Priorities, right? Their guidelines include targeting those concerned about voter fraud and those who question the 2020 election result or Biden-Fauci-World Economic Forum talking points on Covid.

We’ve also learned you will now be targeted if Democrats think you are undermining their efforts to promote, I mean, tackle the topic of climate change. Sources reveal big tech companies have sent emails to public universities across the country to recruit activists to help flag “misinformation” on social media.

Think I’m exaggerating? The left-wing Center for Countering Digital Hate is a British-based organization, and they already lump-in conservative sites with Russian media outlets that it claims to propagate two-thirds of “digital climate change denial.” Not surprisingly, they advocate for removing (what it defines as) hate groups and individuals from media and social media outlets.

But be encouraged things are unfolding as God would allow because evil is being exposed, radicals are being resisted, and their policies simply do not generally have support of the people. This is why they have to block differing opinions and implement such totalitarian measures.

And because many Democrat policies are so unpopular, they’re now worried the public is not signing onto their agenda. Since they’ve overplayed their anti-American, ant-Christian, globalist hand, they resort to force; strong-arm tactics to silence and suppress viewpoints that challenge theirs.

But let’s be honest: people are fed up, yes. However, many are tired, frustrated, and overwhelmed by all that’s going on and prefer to surrender rather than fight. So it remains to be seen whether or not there is enough willingness to work to preserve what freedom we still have in America.