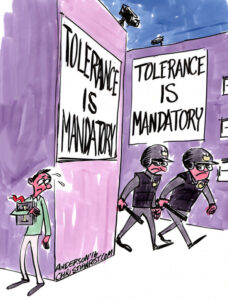 If you are like millions of Americans who chose not to get a Rona vaccine or booster shots, a brand new, disturbing survey not only shows our nation’s divide, but the reality an alarming number of Democrats want to punish you. We’re talking about everything from fines and imprisonment to forcing you into government-run camps.

And they say we’re the intolerant, divisive ones.

According to the Heartland Institute and Rasmussen Reports, the findings are stunning. Nearly 60 percent of Democrat voters support government forcing you to be confined to your home if you’re not vaccinated.

Also, 55% of Democrats think you should be fined. They’d support a “proposal for federal or state governments to fine Americans who choose not to get a COVID-19 vaccine.”

To be clear and fair, the same idea is backed by 19% of Republicans and 25% of individuals unaffiliated with either party. This is also concerning.

If you are unvaccinated, 55% of Democrats want to fine you, 59% want you confined to your home, 48% want you fined or imprisoned for questioning vaccine efficacy, 45% want you forced into “designated facilities,” 46% want you digitally tracked, and 29% want to take your children.

Notice that due to their compassionate concern (wink) for other prison inmates, they won’t send you to a ‘Covid concentration camp,’ but something better – a “designated facility” or undisclosed location. Do you still think history  can’t repeat itself? It’s happening right before our eyes, that is IF our eyes are open!

Though health should not be a political issue, 84% of Republicans and 76% of Independents oppose the camps.

And if you have the audacity to use your blood-bought right to free speech under the U.S. Constitution and question the effectiveness of the only acceptable government solution, almost half of Democrat voters think you should be punished.

Is this sinking in? I disagree with most people on the left and even with some within the church today, but I will respect their decision and not force anything on them against their will. Sadly, the other side doesn’t always think this way.

Comply, obey, and surrender; take government-endorsed shots – or pay a price. This regardless of the fact there is extensive, documented evidence that people have died and are dying from vaccines and well over a million now have reported adverse complications according to the site, open vaers. For those unfamiliar with it, VAERS stands for Vaccine Adverse Event Reporting System.

So the results of this survey reveal an even more divided nation in both politics, health policy, and application of the U.S. Constitution. It stirs up age-old questions like what is the purpose of civil government and does the Bible teach unlimited submission to secular authorities?

What role if any does government play in our private health care for ourselves and our families? What is the responsibility of individual citizens when it comes to contagious symptoms or diseases?

Many of us hope the leftist media, global socialists, and power elites can only suppress the truth for so long until, little by little, more facts emerge. As time goes on, questions will persist about how to respond to the panic-demic as well as actual, unreported, accurate numbers and facts.

One thing is certain: we need to trust in the one true God rather than a secular government consisting of agenda-driven, sinful men and women.

Remember this: both faith and fear demand that you believe in something you cannot see. The choice is ours.

The Bible says faith is the assurance of things hoped for, the evidence of things not seen (Hebrews 11:1), and we have not been given a spirit of fear (2 Timothy 1:7)! Over and over again throughout Scripture, we are told to fear not, to trust in the living God. Lord, increase our faith!

Corruption, group think, propaganda, and mob mentality are nothing new. Another crises will emerge – and the left once again will not let it go to waste. Debates about government power, policy, freedom, and healthcare will continue. But as more data is emerging, accountability will hopefully be demanded, and more questions will be asked about the awful and deadly mishandling of the crisis by the U.S. government (Fauci, and WEF) and its allies in the one Party Big Tech Media Conglomerate.

Use wisdom, pray, and resist medical tyranny. But don’t take it personally when you are criticized and disparaged for simply opposing the ongoing fear, irresponsible rhetoric, and policymaking of so-called experts who supposedly know better than those who have declined the vaccine.

Remember also our Christian underpinnings and foundational freedoms in America, the fact God’s Word is true, and don’t be afraid to have open, respectful discussions on important issues. If we are not allowed to even disagree anymore or question ideas, policies, and assumptions, we’re in deeper trouble than many of us want to admit.