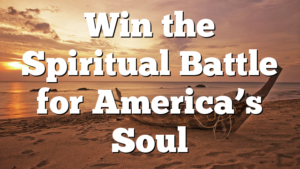 Just like he did when he campaigned against President Trump, Joe Biden keeps claiming he and the godless Democrat socialists have a corner on the market of righteousness and morality in America. The Biden Harris administration keeps calling evil good and mocking the one true God while claiming that God is on their side.

During the 2020 election cycle, Joe Biden’s website displayed an interesting phrase in the upper-left corner: “Battle for the Soul of the Nation.” Most people missed it. The implication was this: the soul of America is at stake, and those nasty, deplorable evangelical Christians, conservatives, and Republicans are the immoral ones who are hurting the country.

There’s a problem here. It seems we understand and define the word, “soul” very differently because the O’Biden Democrats have values that are in opposition with Bible-believing Christians and the word of God.

So what did he say last week and what was the context this time? The great “insurrection” at the nation’s Capital. For a year now, the marching orders of the left have been to use what happened on January 6, 2020, to frame more than half the country – freedom-loving citizens – as radical, domestic terrorists.

I have said it many times, and it is no more true or real than when we think about the events of January 6: We are in a battle for the soul of America. A battle that by the grace of God, and by the goodness and greatness of this nation, we will win.

Really. Most people understand what happened on January 6 was a calculated, pre-planned set-up to take Trump down and frame Republicans. Once again, the global socialists, Democrat media, and America-haters teamed up and did not let another manufactured crisis go to waste.

But Joe, now you’re saying America is good and great? Midterms must be coming up. That’s right, at least in his rhetoric, old Joe is pivoting to the center in the hopes that naïve, uninformed Americans will believe him and think he’s a moderate.

Also, what god do you suppose he’s referring to? Satan and his minions have nothing to do with grace, but lots to do with the Democrat Party Platform. Please understand this is a war of worldviews, not necessarily politics.

Even prior to being ushered into the White House, Biden’s handlers tried pushing the ridiculous idea that Joe was a type of savior, a victor of a holy war and his election would ultimately save America. He often referred to healing and light in his campaign speeches in attempts to present a false impression Biden was the moral one to bring positive change and unity the people.

Make no mistake, when the left refers to unity, they actually mean submission. Communist policy has been unleashed in these United States.

They use the Alinsky tactic of demonizing us, their opponents to distract from the real issues. The left has this down to a science.

Spiritual warfare is very real and more obvious now than ever in our short history. There are battles in heavenly realms over people’s souls and nations because of what they represent. The enemy hates America because of the God we were once united under and the true believers who live for Christ.

I wrote a chapter about this in my book, Canceling Christianity. So since Joe brought it up, let’s talk about morality for a moment. Some may wonder how the open hostility toward the Judeo-Christian worldview became so accepted and normalized.

I quoted author, Don Feder, who explained why left hates religion and how the culture war is between the left’s neo-Marxist worldview—which has come to dominate the Democrat Party—and the Judeo-Christian ethic. The clash was inevitable. Feder states:

In my own articles and videos for Freedom Project, I’ve addressed how out of the mainstream Joe Biden’s gruesome support for abortion is, more extreme than any president in history. We’ve exposed his anti-American open borders policy and how his party has weakened the American economy, the so-called education system, the military, national defense, and trade relations with other countries.

I’ve discussed his constant denial of absolute truth, promotion of moral relativism and the entire LGBTQ agenda, defends vandals, looters, and rioters but not persecuted Christians, cozies up to Communist China, and the fact he has gone on record to demand more Islam be taught in government schools.

And Biden Democrats are fighting for the soul of America? Please.

Let me close with one of many great quotes on this topic of righteousness. President Calvin Coolidge once stated:

“The strength of our country is the strength of its religious convictions. The foundations of our society and our government rest so much on the teachings of the Bible that it would be difficult to support them if faith in these teachings would cease to be practically universal in our country.”

Not only is the Bible no longer taught, it is now banned. Whose morality is being advanced and legislated across this land? You know whose, and it’s not the only living God of the Christian faith. We need more people who are unashamed of the gospel, who know the true history of this nation and the U.S. Constitution to activate and take a stand for truth, righteousness, and justice.

Biblical values and the morality taught in Scripture is what matters most.

Watch Video and share this week’s Christ and Culture!

God’s Got it All Covered – Past, Present, and Future!
Not Exactly Shocking: Many Democrats Want You Punished