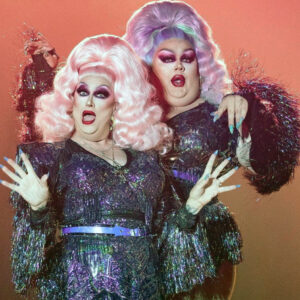 Apparently, anyone can be a pastor these days regardless of what the Bible teaches – and this case is no different. Craig Duke, an Indiana man who declares he is “a social justice advocate and an ally for the LGBTQIA+ community,” recently went drag, literally, and did it for the whole world to see by appearing on the HBO show, We’re Here.

Duke told Religion News Service that he did the docuseries to show his support for his daughter, who recently came out as pansexual.

The so-called ‘reality show’ follows several men, otherwise known as drag queens, as they visit small towns and recruit residents to participate in their shows. Craig Duke, a so-called Reverend, served at Newburgh United Methodist Church near Evansville, Indiana prior to the inevitable fallout. When a professing Christian leader compromises on principles of God’s Word and morality, it can be confusing to people, so let’s clarify and define the role of pastor and what it means to be an ambassador of Jesus Christ.

Ambassador means authorized representative or messenger; or a high ranking diplomatic agent. We’re instructed in Scripture to be holy as God is holy (1 Peter 1:16) and to conduct ourselves or walk in a manner worthy of the calling of God (Phil. 1:27, Col. 1:10). Moreover, social justice “Christianity” is apostasy.

If this guy believes and supports things that are contrary to biblical principles, was he also teaching those ideas at the Methodist church? God’s Word clearly warns about a man dressing in woman’s clothes and a woman wearing a man’s clothing (Deuteronomy 22:5); this is an abomination to the Lord.

The Bible says those who are pastors and teachers will be held to a stricter standard of judgment if what we say does not line up with the truth. And you will know them by their fruit.

One of the purposes of a pastor and teacher is “for the equipping of the saints for the work of ministry, for the building up of the body of Christ (Ephesians 4:11-12).” Does it equip and build up believers when you promote social justice, LGBTQ lifestyles, and dress like the opposite sex?

In the book of Jude, Christians are warned to contend for the faith against false teachers and immorality. The Bible states:

For certain people have crept in unnoticed, those who were long beforehand marked out for this condemnation, ungodly persons who turn the grace of our God into indecent behavior and deny our only Master and Lord, Jesus Christ. (Jude 1:4)

By affirming sinful behavior or by approving of lifestyles and practices that go against what the Bible teaches, you are either rebelling against God or denying the truth of Christ. Reverend Craig Duke appears to have done just that, and even assumed most people in his church would be on board with his decision to promote drag queens and moral relativism. He later admitted it was clear “there were folks that were more displeased with my participation than I was aware of.”

Ok, so how did he end up on the TV show? He was chosen by the River City Pride organization. Have we entered into an alternate world in which LGBTQ groups now support the church as a whole? Uh, not quite. Not authentic, biblical Christianity anyway. But GLAAD (Gay and Lesbian Alliance Against Defamation), a leading LGBTQ advocacy organization, said church members bullied Duke after appearing on the drag program. So, a GoFundMe page set up for Duke has raised over 50K already.

Why? Because of those angry fundamental Christians, of course. It also seems it is more popular to conform to the world’s ways than to stay true to God’s Word. Romans 12:2 states:

And do not be conformed to this world, but be transformed by the renewing of your mind, so that you may prove what the will of God is, that which is good and acceptable and perfect.

According to a statement from his church, Duke was not technically “fired,” as he did not “commit a criminal act” nor did he violate the United Methodist Book of Discipline.

“During his time of being relieved from pastoral duties, he will be engaging in a process of renewal, reflection, and recovery that will be monitored by our conference Director of Leadership Development… Our desire is to provide an opportunity for Craig to again be able to utilize his numerous gifts as a pastor in a local congregation.”

This is revealing. What they want is for Crag Duke to be leading another United Methodist Church. Got it. It’s difficult today to find denominations who have not abandoned the inerrancy of Scriptures and who preach the whole counsel of God – in context.

Hoping to “create dialogue” within the congregation, Duke was even planning to lead a six-week Bible study about sexuality at the church. What changed his mind? Another “negative, bullying, attacking email from a church person” after his drag adventure. We should be thankful that not everyone in the congregation approved of his behavior and philosophy. He said the conflict (he himself created!) and some people’s anger were not good for his mental health.

But it gets more interesting. According to the RNS article, Ross Murray, a deacon within the LGBTQ-affirming Evangelical Lutheran Church in America and senior director of training for the GLAAD Media Institute, praised Duke’s appearance on “We’re Here” saying he followed Jesus’ example.

“Pastor Craig Duke gracefully engaged a community that has experienced disproportionate church-based trauma and exclusion to proclaim a message of God’s love for all of creation. Pastor Craig is emulating the example of Jesus…”

So let’s get this straight: Jesus dressed in drag, taught about different kinds of “justice,” and promoted sinful behavior? Please show me chapter and verse on that one.

Duke defended his ‘seeker sensitive’ approach by saying his message to people has always been, ‘God loves you, period, as you are, where you are… God loves you unconditionally, and that hasn’t changed…’ But the question we must ask is does that agree with what God’s Word says? Not entirely. God loves all people, yes, but the gospel requires repentance. He doesn’t want people to remain in their sins. We must believe Jesus is Lord, confess our sins, and then what follows an authentic conversion is a fruit-bearing life and obedience to His commandments.

Most of us understand the desire to please people and to be liked by everyone, but that’s not biblical. And we all know how easy it is to conform to this world.

Salvation requires a decision to trust Jesus. So in this season of Christmas as we celebrate the incarnation, the historical truth God sent His only Son to give His life as a ransom for many, let’s exalt Him properly. May we celebrate the holy-day, the birth of Christ, and remember to acknowledge the Lord in ways that honor Him. Let’s represent Him, love well, and hopefully draw others to the family of believers.

SCOTUS to Decide Whether or Not to Keep Murdering Babies
Facebook, Fact Checkers Are Opinionated Lefties After All