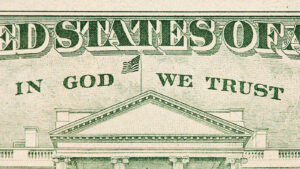 If you want an indication of a person’s politics and worldview, ask them a few key questions: do our rights come from God or from government? Who do they fear and who do they trust in, God or in man? Is the Bible true?

Next, what do they believe about conscience and freedom of religious expression? In the face of federal mandates and power grabs, what about state’s rights? For example, section 3 of the Pennsylvania Declaration of Rights states:

“No human authority can, in any case whatever, control or interfere with the rights of conscience.”

Why can’t Christians refuse the new vaccines knowing that the research required the use of aborted baby parts, I mean, fetal cells, tissue or other such materials to develop the shots? Why can’t employees say no to a shot and be allowed to keep their jobs? Why can’t parents say, ‘No, we decide what’s best for our own children’?

Where’s the outrage and push-back against increasing government intrusion and control?

Do sincerely-held religious beliefs even matter anymore to our government? Clearly and sadly, the answer appears to be ‘no’. But as true disciples of Jesus Christ, our faith includes a basic understanding of God as Creator, human beings made in His image, and inalienable rights, including life and liberty. Our beliefs also include the protection of all human lives, the sanctity of life in the womb, and striving to keep a pure conscience before God.

Tuesday, I interviewed Pastor Randy White from dark blue New Mexico, a good Bible teacher and an advocate for religious freedom. He recently stated what used to be obvious in the USA:

“There should be one and only one vaccine exemption necessary: I don’t want it.”

In other words, no  means no! But that’s not enough in today’s totalitarian states of America. Courts, Democrats, and complicit Governors are making decisions for us. In public schools, the will of educators trumps parental rights in too many cases, and now they plan to mandate shots for kids.

Responding to the FDA’s claim that the new vaccines are safe for children age 5 – 11, Dr. Ben Carson opposes the O’ Biden administration’s push not only to vax the adult population but young children as well. Carson, renowned for his innovative surgeries to save the lives of children, is former director of pediatric neurosurgery at Johns Hopkins Children’s Center.

“Do we want to put our children at risk, when we know that the risk of the disease to them is relatively small, but we don’t know what the future risks are? Why would we do a thing like that? It makes no sense whatsoever,”

He believes this amounts to a “giant experiment,” rightly arguing that there is no sufficient data to determine long-term risks posed by the shots.

But according to the CDC and their own Covid-19 Response Team, only 94 children between the ages of 5-11 have died of COVID. To be clear, this is only 0.00012 percent of total COVID deaths through mid-October, 2021. Facts matter.

However, Dr. Eric Rubin, editor-in-chief of the New England Journal of Medicine, expressed the concern about possible severe shot side effects that cannot yet be measured. His conclusion?

“We’re never going to learn about how safe the vaccine is unless we start giving it; “That’s just the way it goes.”

Isn’t that the kind of flawed logic Nancy Pelosi used in 2012 on Obamacare when she said “we have to pass the bill so you can find out what’s in it.” Yes, she really did.

Some things never change. Today’s radical, global socialists sure aren’t letting this crisis go to waste either, and millions are being affected including children, students, employees, health-care workers, firefighters, and the military. More lawsuits are bring filed and courts will see these issues debated. But a word of caution is needed here: tragically, we can no longer rely on the high courts.

Writing for The Blaze, Daniel Horowitz points out how obvious it has become that the majority of Democrats apparently believe the government — federal or state — can now control your body, regardless of the evidence or resistance. But fifty years ago perhaps, the SCOTUS would have laid down the Law in decisions defending religious freedom, states rights, and the U.S. Constitution. Not anymore.

Like many of us, he is disappointed by recent decisions of several Supreme Court Justices, even those once thought to be conservative. Horowitz states:

An American does not have a right to breathe freely without a mask and live a functional life without taking a risky injection, but those with gender dysphoria have a right to force a hospital to perform castration. Also, an individual has a right to insurance coverage for abortion but not for ivermectin or lifesaving COVID treatment. This is the America we now live in;

Most court-watchers thought it was a no-brainer that the justices would uphold religious liberty exemptions from vaccine mandates based on case law. But Neil Gorsuch, Clarence Thomas, and Samuel Alito were the only three to oppose big government. Amy Coney Barrett and Brett Kavanaugh have been disappointing and inconsistent in their short time on the Court.

Since our founders established a system in which all three government branches were accountable to the people, they would most likely be astonished today that the people for which the Constitution was written have done little to oppose the massive growth, recklessness, and unchecked power of the United States government.

Using Executive Orders and mandates, Joe Biden has way too much power at his disposal. The three branches of government are no longer equal and tragically, a handful of justices now dictate public policy, overpowering the citizens they were appointed to serve. Our founders realized the human heart is wicked, and they had the insight to place checks and balances on government.

They were rightly concerned the fed might seize powers from the states. And today, they have done just that. Thomas Jefferson was one of many who warned that the courts could gain power little by little, advancing like a thief “until all shall be usurped from the states.” And Biden Harris handlers have taken full advantage.

We truly do not give America’s founders enough credit for their wisdom, foresight, and recognition of the need for godliness among the people and those they elect to public office.

The current state of church and nation, however, goes beyond constitutional issues, health, or even medical tyranny. The stakes are eternal. Souls, truth, and righteousness are on the line, and our children are watching. Our freedoms will not last and the gospel could soon be outlawed if the majority of Christians, pastors, and concerned citizens remain casual observers, too busy to either know what’s really happening or to do anything about it.

Let’s encourage each other in Christ to be active, alert, effective followers of our great God and King. We must answer to an Audience of One, because regardless of what people think, all authority and power comes from Him. The prophet Isaiah stated:

“For the Lord is our judge, The Lord is our lawgiver, The Lord is our king; He will save us— (Isaiah 33:22)” And, “To whom then will you liken God? Or what likeness will you compare with Him? He it is who reduces rulers to nothing, Who makes the judges of the earth meaningless (Isaiah 40:18, 23).”

It’s true we may have reached a point of no return as a nation, but that does not mean we the people should give up the fight for faith, family, and freedom! Be informed, but not overwhelmed. Understand the times and know how to respond biblically. Boldly and respectfully, challenge and resist deception, indoctrination, propaganda, and tyranny. Help rally the remnant of true, Bible-believing Christians to engage, then put on the armor of God and stand your ground.

America will not be preserved and saved without the true church praying, repenting, voting, and living out loud for Christ.