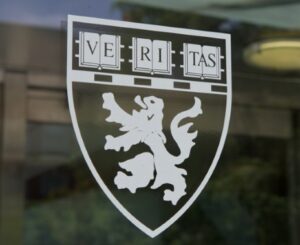 Veritas? When Puritan colonists settled in New England in the 1600s, they had a dilemma. How would they ensure that the church – pastors and clergymen – would be literate and strong leaders in the Christian faith? The solution was to open a school to educate ministers.

Named after its founder, Pastor John Harvard, every president of the school for the first seventy years was a minister. So to hear news that the new head of chaplains at Harvard is an atheist has caused both controversy and confusion. And yet, it is not surprising.

So now, atheist, Greg Epstein, author of the book, Good Without God, and who has served as Harvard’s humanist chaplain since 2005, is the new chief University Chaplain. In his new role, he will lead 30 to 40 chaplains who represent 20 different religions, spiritual, and ethical traditions.

What could go wrong? A prominent humanist who does not believe in God, the Bible, or moral absolutes, is head chaplain. This is a total contradiction in both purpose and logic. Bible-believing Christians are to live for the one, true living God!

“We don’t look to a god for answers, we are each other’s answers.”

Talk about a recipe for disaster. And according to reports, his election to the post was reportedly unanimous. What happened to Harvard? The same thing that has happened at nearly every single public university.

First, humanism is a philosophy that rejects God and the supernatural, placing man as the center of life, reason, and meaning. It too, is a religion, but one for a New Age. Check out what another humanist, John Dunphy wrote in a 1983 edition of Humanist magazine:

I am convinced that the battle for humankind’s future must be waged and won in the public school classroom by teachers who correctly perceive their role as the proselytizers of a new faith… teachers must embody the same selfless dedication of the most rabid fundamentalist preacher, …utilizing a classroom instead of a pulpit to convey humanist values in whatever subject they teach, regardless of the educational level – preschool, daycare, or large state university.

The classroom must and will become an arena of conflict between the old and the new – the rotting corpse of Christianity, together with all its adjacent evils and misery, and the new faith of humanism, resplendent in its promise of a world in which the never-realized Christian ideal of “love thy neighbor” will finally be achieved.

And yet, Harvard University was founded as Harvard College in 1636. Its stated purpose was: “To train a literate clergy.” Among its mottos were, “Veritas Christo et Ecclesiae” which is translated, Truth for Christ and Church (see logo),’ and “In Christam Gloriam” (to the glory of Christ).

But by the mid-1800’s, they removed Christ and the Church from it’s shield, leaving only one word: Veritas. But whose “veritas” is it if Jesus is removed, and for what purpose if the church is removed?

Apparently, the role of the new atheist, humanist “chaplain” is to coordinate the campus’ Christian, Jewish, Hindu, Buddhist and assorted other religious communities. The new president however, 44-year-old Epstein, does not identify with any traditional religions.

To be sure, he can be or believe whatever he wants. But many are wondering how an atheist can be a university chaplain? Our culture has already redefined truth. Why not redefine what it means to be a chaplain?

How can you conduct a worship service if there is no God to worship? Let’s reason here. If you don’t believe in God, you cannot do any of these duties – that is unless you reject the formerly universal definition and understanding of chaplain.

How can you perform religious rites, all of which presuppose the existence of a deity, if there is no deity and man is his own god? To whom do you pray? What hope can you offer hurting or dying people regarding the problems of this life and the world to come?

As worldly philosophies such as collectivism, liberalism, and secular humanism expanded in universities across America, compromises and sacrifices were made at the expense of truth and the inerrancy of Scriptures.

How sad to acknowledge that the earliest established colleges in the U.S. were once saturated with Christian influence and instruction. Believers in Christ had a strong, positive, moral influence on culture, and the freedom to practice as well as to proclaim their faith.

In fact, a founding inspirational verse Harvard followed was John 17:3 which states,

This is eternal life, that they may know You, the only true God, and Jesus Christ whom You have sent.

The once Christian-based University gradually caved to the cult of liberalism and was hijacked by Unitarian Universalists in the 1800s. Cultural Marxism did the rest. Just look at some recent history.

“Harvard College Faith and Action” was placed on probation after asking one of its leaders to step down for being in an open same-sex relationship. Adhering to biblical standards however, violates the Student Organization Policy Guide. The student paper also accused the same Christian group of hate and homophobia for giving a platform to a former lesbian who converted to Christianity.

More than a fifth, 21.3% of the class said they were agnostic and 16.6% said they were atheist. Those having the audacity to identify as Protestant were around 17%. But if you understand the history of Ivy League colleges, this decline of truth, religion and spirituality is as telling as it is tragic. 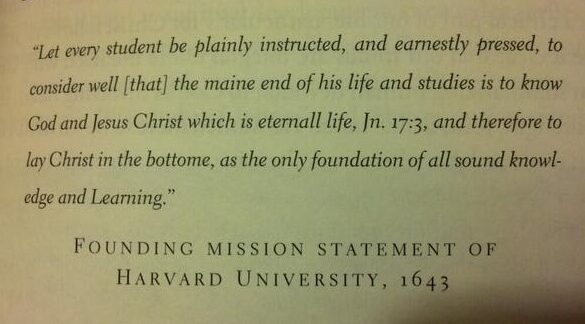 “Let every student be plainly instructed and earnestly pressed to consider well, the main end of his life and studies is to know God and Jesus Christ, which is eternal life (John 17:3) and therefore, to lay Christ… as the only foundation of all sound knowledge and learning…”

The very institution that presupposed education be based on Scripture, the starting point for wisdom and knowledge, removed Christ and the Church from its mission. To avoid further confusion, perhaps Harvard should also remove “Veritas” from the shield and motto.

The Bible is the source of truth and Psalm 117:2 says “The truth of the Lord is eternal.” His word stands forever and the fear of the Lord is the beginning of wisdom and knowledge.

Founder of Answers in Genesis, Ken Ham, explained that although Greg Epstein claims to be devoid of all religion, just the opposite is true.

What Jesus said describes the situation here, “they are blind guides. And if the blind lead the blind, both will fall into a pit” (Matthew 15:4). The article about this atheist, now heading up the chaplains at Harvard University, states: “The chaplains argue that as a man with no clear religious affinity…” That’s a load of nonsense. This man is an atheist–that’s his religion. He has a belief system, a worldview. He believes all life is a result of naturalism. He believes man determines his own morality, and his own “purpose” & “meaning” in life.

This should be a warning to the small number of remaining schools who have not yet fully compromised their biblical values and principles. Harvard justifies its decision by saying an atheist like Epstein was a good choice “due to young people’s increasing lack of religiosity.”

Giving kids what they want instead of what they need has only led to cultural decay and death. The Bible teaches that the wisdom of this present world is foolishness to God (1 Cor. 3:18). Naturally, the Harvard Catholic Center and the Harvard Christian Alumni Society agree with the decision to elect an atheist as president of its chaplains.

Acknowledging a creator, God, and One who sustains all things is a wise and most basic tenet of faith.

Psalm 14:1 is quite clear on this truth:

The fool has said in his heart, “There is no God.”

And without faith it is impossible to please Him, for the one who comes to God must believe that He exists, and that He rewards those who seek Him.

For the wisdom of this world is foolishness in the sight of God.

Once again, this is about worldview, and it all comes down to three words: God or man?

Perpetual Conflict and Destabilization: The Issue is Never the Issue
Power – By Any Means Necessary