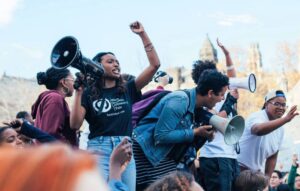 Surprised? In a new poll, only about a third of young adults say they are proud to be American. Most seem to be embarrassed of or even dislike their own country. I personally believe it is because they are not taught the about God’s sovereignty and true history about America. Maybe they should try living in some third world country or visit a communist nation.

According to the poll, young adults between 18 and 24 were most likely to say they were only slightly or not at all proud to be an American (35%).

The question must be asked: are we seeing the fruit of outcome-based education? Consider the concept, “hours of influence.” How much do parents, churches, social media, peers, or government schools factor in? Kids today generally know much less about America’s true history, but are also less proud of a country they have not been fully taught about or think is racist.

Public education in America has all-too-often become a tool of those who wish to produce anti-citizens: those who wish to tear down the systems in the name of some higher or lower purpose. No society can survive this in the long term.

One way to condition young people to think the country is bad is to promote lies about institutional or “systemic racism.”  The same teacher’s unions that teamed up with globalist Democrats to advocate for school lockdowns are now engaged in a new attack on American families through the implementation of anti-American curriculum such as Critical Race Theory (CRT).

But some parents have had enough and Americans are banding together to fight back against the indoctrination of children. States have begun to ban the teaching of CRT in schools.

How did the Left respond? At its latest conference, the National Education Association (NEA) doubled down to openly promote CRT in K-12 schools. They also oppose parents as well as any bans on instruction of the Marxist ideology. The liberal union also approved measures to do opposition “research” and attack opponents of CRT. And then, they scrubbed those plans from their website.

Interesting, but back to the poll.

There’s good news: 86% of senior citizens, those over 65, are most proud of their country, as well as 75% of those between 45 and 64. The bad news is the country has drastically changed. Young adult activists with anti-American attitudes are leaders and influencers in the workforce, corporations, public schools, and part of the one party, big tech media conglomerate.

An exception is Owen Strachan, a young professor of theology who is a voice of truth among his peers, many of whom have fallen for lies. He recently pointed out the hypocrisy of young people today who enjoy the blessings and freedoms of living in America while “endlessly dumping on” the country. Hollywood celebrities and rich professional athletes like to do that too.

“Young Christian: if you’ve been told that loving Christ and being thankful for your country can’t coexist, you’ve been misled. Loving your country is a form of neighbor-love (Matt. 22). Many American Christians know America is far from perfect and isn’t our true home – yet we love it.”

The poll was conducted just before the Fourth of July. It makes you wonder what our founders would think, especially those brave men who lost their homes, families, or even their lives fighting for the freedoms we enjoy and take for granted.

We should also have resolve today to maintain liberty and religious freedom – as so many did in 1776 when they signed the Declaration of Independence.

Of the fifty-six courageous men who signed that original document in Philadelphia, many did not survive the war that followed. Five were captured by the British and tortured before they died. Nine others died in the Revolutionary War. Twelve had their homes sacked, looted, burned, or occupied by the enemy. Two lost their sons in battle. The price of freedom was high indeed for those men. But I fear that true history is no longer taught.

One consequence of the biblical Christian worldview declining in America is the increase of lawlessness and immorality. Today’s kids are also more open to socialism and globalism than ever before. I believe we’re at a dangerous and pivotal point in U.S. history.

We have seen the rotten fruit of over a half century of children being taught there is no God, Jesus is a joke, truth changes and so can gender, capitalism is evil, and the country is systemically racist and must be deconstructed.

Founder of Exodus Mandate and Chairman of PublicSchoolExit.com, Lt. Col Ray Moore insists it’s time to pull our kids out of public schools. Government weaponized education to produce change agents and activists for the left, and Moore is warning conservatives to abandon “the myth of reforming public schools.” I agree.

Education is no longer designed to produce responsible citizens. Even with the very few examples where conservatives actually controlled the school board, their reforms were undermined and, as soon as they left office, they were repealed. Moore believes:

Let’s not be naïve. The average age of last year’s rioters, vandals, and leftist protestor was 25. Think about that. Young adult activists. Cities burned, historic statues were destroyed or removed, and lawlessness was encouraged. In America.

We have not only forgotten the living God that shed His grace on this nation, but we have also forgotten our true history. It makes you wonder if this was all by design. (It was.) School children should be taught the horrific truth about the dangers of communism and Marxism. Is it too late? I think so, but hope I’m wrong.

President Ronald Reagan was concerned about this in the 1980’s and said children must be taught at home and in school what America is and how special freedom is.

“If we forget what we did, we won’t know who we are. I’m warning of an eradication of the American memory that could result, ultimately, in an erosion of the American spirit. Let’s start with some basics: more attention to American history…”

He’s right. But is it still remotely possible? Your move, Christian parents and concerned citizens in the land of the free. Either fight this battle with teachers, curriculum, worldly philosophies, unions, and bureaucrats and attend school board meetings (as you teach your kids truth at home), or remove Christian children from this awful, godless system that no longer is concerned about pure education and producing good, responsible American citizens.

Be Watchful, Knowing the Time! (sermon video & notes)
Are Climate Lockdowns Next?