Canceling Christianity: How the Left Silences Churches, Dismantles the Constitution, and Divides Our Culture.

If you haven’t been paying attention, you might be surprised or even skeptical about a title like Canceling Christianity. First, Jesus is Lord, He is sovereign, His Word is final authority, and our God can never be cancelled – even though for over 2,000 years, societies have tried.

The Left in America is no different, and they’ve been relentless. They are aiming to eradicate Christian influence and history from public schools and universities to the public square – to the halls of government and corporations. As they promote godlessness, they’re trying to control and silence those of us who oppose the antichrist spirit of the age.

Enemies of God want to destroy not only the church, but the very essence of America. And, as we’ve seen in recent years, the progressive left will use a virus, an election, or any crisis (real or manufactured) to gain power, suppress the truth, and openly advance evil agendas.

How should Bible-believing Christians respond?

Because our country and churches have been compromised, this book is a wake-up call for lukewarm, complacent, or concerned Christians. It’s also a call for believers who don’t want to stand by and watch America be deconstructed, the Constitution dismantled, and the true church be forced underground.

Persecution is not coming; it’s here. Canceling Christianity is a call to reclaim and strengthen the church for Christ before it’s too late. The gospel must be preached and the true church must not surrender! Did you ever imagine a time – in America – when government would deem the church “non-essential”?

Canceling Christianity is about the battle for the heart, soul, and survival of our nation, it’s about the spiritual conflict we’re facing, a conflict openly manifesting in the natural, physical realm. Forces of darkness – both human and demonic – are behind these leftist agendas driving cancel culture. Some are deceived while others are deceivers.

Should we just be silent or live and let live? If you think the nation is at a tipping point and “separation of church and state” is one of the biggest lies in America, this book’s for you!

Canceling Christianity is about opposition to the biblical church and growing hostility toward those who refuse to comply with evil agendas. At its foundation, this is a war of worldviews; one with God vs one without God; one that includes biblical morality and truth vs one that includes moral relativism, lies, and cultural chaos where the State is god.

With religious freedom being threatened, censorship increasing, and major institutions hijacked by the left, this book helps identify the dangers of these divisive times.

This book is a sobering analysis of the state of the church and a country on life support.

And I can use your help getting the word out! Like many friends, I’ve been suppressed on social media, shadow banned, censored, and demonetized on Facebook, where the powers that be just rejected a fourth ad for Canceling Christianity. I know, ironic.

So, friends on these platforms, every time you share one of my posts, it is much appreciated. I’m also looking for people or ministries who may be interested in purchasing a case of my books for 50% off through my publisher. Email [email protected]

Prepare for a sobering, eye-opening look at the conflict within and decline of America, as well as where we go from here. I hope and pray this book encourages you to act and strengthens your resolve to engage.

We must be undaunted in a divided culture becoming more hostile toward Christians. It touches on the unavoidable conflict we’re faced with, and the importance of the salt and light of Christianity to the health and strength of the nation.

For believers in Christ and a world-transforming gospel we’ve got work to do while we’re here! I hope and pray this book encourages your faith, challenges your perspective, reminds you of our true history, provides new insight, and strengthens your resolve to live out your faith and impact culture for Christ. 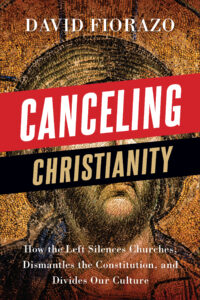 Get Canceling Christianity at Amazon, Barnes and Nobel, or wherever good Christian books are sold.

DESCRIPTION: Canceling Christianity is about the battle for the heart of America between two contrasting worldviews finding it harder to coexist in a constitutional republic. It highlights realities that believers face, the spiritual conflict we find ourselves in, and stresses the importance of the salt and light of Christianity to the survival of the nation.

OR ORDER NOW! (LINK to AMAZON)