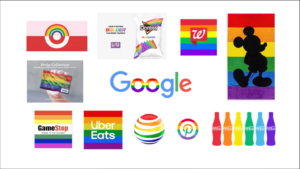 We must be in the month of June. How can you tell? LGBTQ flags and rainbow reminders are everywhere as part of the propaganda to force the celebration of “Pride Month.” If you use email, an iPhone, social media, the Internet, watch television, shop for groceries, or follow pro sports, you know it’s everywhere

It’s not surprising the left is cramming this down people’s throats, but what’s sad is the compromise and capitulation of corporations, politicians, public schools, the Democrat media, and even many churches.

The rainbow has been hijacked. God created is as a beautiful promise to mankind not to destroy life on the earth by flood waters ever again! Genesis 9:16 states:

When the rainbow is in the cloud, then I will look at it, to remember the everlasting covenant between God and every living creature of all flesh that is on the earth.

He sets the rainbow in the clouds as a symbol of hope and a reminder that God is both loving and just. Even though depravity and immorality today are worse than the days of Noah, He still has not judged us accordingly. Yet. I’d say He’s being pretty patient.

You might wonder why they chose the rainbow? Blatant mockery of God and open rebellion against the truth regarding judgment of sin. The rainbow is a biblical symbol closely associated with the presence of God and His authority. Revelation 4:3 adds,

And He who was sitting [on the throne] was like a jasper stone and a sardius in appearance; and there was a rainbow around the throne, like an emerald in appearance.

The perverse and blatant misuse of the rainbow to represent what the Bible considers sinful behavior is further evidence our culture is lost, or at least morally confused. We must not conform to the world’s ways and yet, by our silence we accommodate rebellion against God.

From advertisers and corporations, Hollywood and pro sports teams, to big tech and the media, breakfast cereals and kids toys, it’s clear to see the success of their manipulative cause, People have been deceived into believing LGBTQ individuals are marginalized. The promotion of this narrative has been unparalleled.

I’m not sure when the LGBT movement will feel comfortable moving on from the victim role they played to perfection, and finally claim their unquestioned victory in the culture war, but who are we kidding? Can anyone say with a straight face that the gay rights movement hasn’t won over the hearts and minds of pop culture?

The O’Biden Harris administration saw to it that the military are all in, and even the U.S. Embassy to the Holy See (America’s diplomatic outreach to the central government of the Catholic Church in Rome, Italy) was flying the gay pride flag from their building.

Heck pointed out Georgetown University, the oldest Catholic institution of higher learning in the country, has an “LGBTQ resource center” just like most universities including Notre Dame. Some Catholic churches drape rainbow colors over the altar during “Pride” masses, and some progressive “Christian” churches have welcoming rainbow flags flying outside their buildings.

But many of you may disagree with this next observation. If you believe in the one true God and the biblical worldview, however, you might see my point.

There are politicians on the right catering to the left by promoting pride month including Ronna McDaniel, Republican National Committee chair. A social media post from the GOP official sent a confusing message by recognizing “Pride Month” while acknowledging religious objections to homosexuality – in the same statement.

On Twitter, McDaniel also claimed the Republican Party has,

“…doubled our LGBTQ support over the last four years, and we will continue to grow our big tent by supporting measures that promote fairness and balance protections for LGBTQ Americans and those with deeply held religious beliefs.”

Fairness. Protections. Special rights, such as passing the horrific “Equality Act.” Conservatives and truth defenders are understandably upset with Republican leadership for lowering its standards to align with those who reject the truth of God, are anti-family, and who deny biological facts.

Democrats have chosen their platform and have their marching orders. If Republicans want to win elections, compromise with the left and blurring the lines between parties is not a smart move.

Jesus defined marriage as between one man and one woman. Period. The biblical view of marriage and family mirrors a culturally conservative view. The traditional two-parent household having a mother and father strengthens communities, local schools, and is the foundation of Western Civilization.

Back to the rainbow, the sin of pride, and the religion of sex. Christians must stand for truth and moral clarity. Peter Heck also said even if the church isn’t insulted by the act of misusing and perverting the rainbow, God is – and that’s far more consequential. There are consequences when Americans take the path of least resistance.

Implicit in that Noahic covenant is the warning that His second and final destruction of the earth will be by fire. Dr. Scott Lively writes that rampant homosexuality is the key symbol of ultimate rebellion triggering God’s wrath. He adds:

Let this be America’s warning as it willingly hosts countless rainbow-emblazoned “Gay Pride” parades and flies the LGBT rainbow flag over every US Embassy in the world. THIS is the harbinger of wrath. And your attitude about pride in perversion is a big part of God’s litmus test for your fate. Shun the curse of the LGBT rainbow flag!

Isaiah 3:8-11 warned the Judeans of God’s coming punishment for their sins:

“For Jerusalem is ruined, and Judah is fallen: because their tongue and their doings are against the LORD, to provoke the eyes of his glory. The shew of their countenance doth witness against them; and they declare their sin as Sodom, they hide it not. Woe unto their soul! for they have rewarded evil unto themselves. Say ye to the righteous, that it shall be well with him: for they shall eat the fruit of their doings. Woe unto the wicked! it shall be ill with him: for the reward of his hands shall be given him.”

Pride goes before destruction, and a haughty spirit before stumbling.

To proudly flaunt depravity is one thing, but to approve and celebrate sin by being silent, by accommodation, or by being neutral is another. True Bible-believing Christians must not conform or participate in deeds of darkness, but rather be set apart and transform our culture with the light of Christ.

Get Canceling Christianity at Amazon, Barnes and Nobel, or wherever good Christian books are sold.