The O’Biden Harris Administration announced Monday they “are proud to recognize the International Day Against Homophobia, Transphobia and Biphobia,” which was observed Monday May 17. The majority of Americans including Christians who believe the Bible need not apply.

As American citizens are concerned about the economy, government spending, taxes, gas shortages, some schools still closed, healthcare, the southern border crisis, Rona propaganda, threats to our freedoms, turmoil in the Middle East, racial and political division, and a complicit one-party media, Joe Biden’s handlers stress their commitment to stand with the LGBT community.

During the Obama administration, Joe Biden pledged his allegiance to the radical left, and is now using the power of the presidency to unleash an even more godless agenda. He believes the lie that keeping boys out of girl’s bathrooms, locker rooms, and women’s sports is discrimination; biology is unjust – so follow the science!

In his statement, Biden boasted about making “…historic appointments of LGBTQI+ individuals to the highest levels of our government;” He also added:

“We continue to implement my executive orders to advance equality and equity; “And I continue to urge Congress to pass the Equality Act, which would confirm critical civil rights protections on the basis of sexual orientation and gender identity for all Americans.”

I reported on the Equality Act several times, and you need to understand how extreme and unconstitutional this is. Notice that Biden is going through executive orders like toilet paper, signing an already historic amount of them. A Republican president doing the same would be called a dictator and his governing by pen would be challenged constantly by media activists.

So, what effect do these LGBTQ appointments and declarations have on the nation? 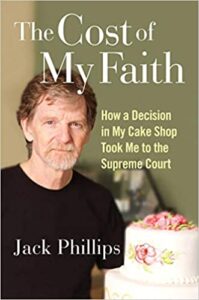 Someone who knows better than most is Colorado cake artist and business owner, Jack Phillips. He’s back in the news because he has a new book coming out in a few weeks called, “The Cost of My Faith: How a Decision in My Cake Shop Took Me to the Supreme Court.”

In a recent interview with CBN News, Phillips explained his reasoning for why he couldn’t in good conscience design and bake a cake for two men celebrating their gay marriage.

“The Bible is pretty clear that God made male and female and He joined them together in marriage,” Phillips said. “And marriage was His design, His idea. I’m not smart enough to do anything like that. And He created it unique and special between a man and a woman and any other view of that would go against biblical principles.”

He also said that one of the commissioners said religious freedom was “a despicable piece of rhetoric” used to justify things like slavery and the Holocaust. Really?

Don’t forget that the Colorado commission gave Phillips an ultimatum: either bake the gay wedding cake or stop making wedding cakes altogether. So much for tolerance. The leftist commission also ruled Jack Phillips’ staff go through mandatory re-education to teach them the baker was wrong and that believing the Bible is discriminatory.

Thankfully, the Supreme Court ended up ruling in his favor and on the side of religious freedom, but Biden thinks that was wrong and Phillips should have been punished. This administration won’t think twice about discriminating against you if you resist.

Think about how our founders, early presidents, or American patriots would react if they heard a U.S. president deny God, creation, the Bible, and promote being lesbian, gay, bisexual, transgender, or queer. Imagine.

“Everyone is entitled to dignity and equality, no matter who they are, whom they love, or how they identify—and we will continue to engage with allies and partners to advance the human rights of LGBTQI+ people here at home and in all corners of the world,”

Dignity for all, yes. But they have redefined equality and equity. Again, a majority of Americans need not apply. They mean special rights, not equal rights. Also notice he almost alludes to war saying the O’Biden administration will engage with allies to advance this agenda.

What about the human rights of Christians, conservatives, independents, Republicans, and Americans who believe in actual science and biology? We are reaping what we have sown in elections in America. This is what happens when one party thinks our rights come from government and not from Almighty God.

Please remember to check out my brand new book, Canceling Christianity, number one on Amazon in ‘Religious Intolerance and Persecution’.