According to reports, Black Lives Matter raked in between $90 and 100 million dollars in 2020 alone. Do you know anyone who jumped on the BLM bandwagon and donated money to the cause? Reports show the money trail is extremely difficult to follow. 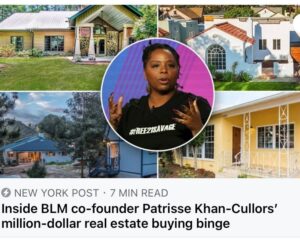 But as protests, rioting, looting, and vandalism broke out across the country last year, the group’s co-founder was fighting oppression and injustice by going on a real estate buying binge. Patrisse Khan-Cullors and her “wife,” Janaya Khan now have four homes worth over $3.2 million in the US alone.

In a story from the New York Post, they are also considering property in the Bahamas near the exclusive homes of Justin Timberlake and Tiger Woods. Rough life leading a revolution.

In the Book of Acts, the Bible states that God created all life and that, “He made from one man every nation of mankind to live on all the face of the earth (17:26).” Much of what we’re being fed today by far-left activists, university professors, race hustlers, and the Democrat media is based on a false premise.

Since its creation in 2013, Black Lives Matter has raised over a billion dollars from corporations, international organizations, political fundraisers, and leftist donors. It then funneled money into the campaigns of Democrats thanks in part to “ActBlue Charities,” a fundraising arm of Democrat campaigns.

Part of the BLM slush fund from last year included $21.7 million dollars for grants which went to 30 black-led, Democrat groups across the country. Are you finally seeing through the masquerade? They’re not helping the oppressed; they’re funding a rebellion.

According to co-founder, Khan-Cullors, she embraced activism and Marxism when she turned twelve. Last October, the activist signed “a multi-platform” deal with Warner Bros. A multi-millionaire at 37, she is apparently angering fellow leftists for her high spending sprees. Ironically, wealthy Communist leaders throughout history lived in luxury while denouncing capitalism and insisting they are fighting “for the people.”

If black lives really mattered, wouldn’t they help some of the poor, inner-city black communities across the U.S.? Why don’t they address the genocide of 20 million black babies murdered in the womb since 1973? Hundreds of thousands of black lives in other nations are impoverished, oppressed, or persecuted for their faith.

If BLM could spare a few million here and there, it sure would help those in need.

Christians should not be indifferent towards racism, injustice, discrimination, or bullying of any kind. But wisdom and discernment are needed regarding who to give money to and what causes to support.

Don’t fall for the guilt-tripping, manipulation, or virtue signaling. Every person is accountable to God and the Bible clearly teaches individual responsibility. Groupthink and political correctness have fractured our country – on purpose.

It is counterproductive to divide people by nation or origin, sex, race or skin color. For those believers who are in Christ, our identity is in Him. Galatians 3:28 states:

We should be united. Yes, we can be upset at injustice, but our reactions must still be within biblical parameters. If not, what makes us different from the world?

We should also recognize anti-Christian movements when we see them.

Oakland, CA-based BLM Global Network Foundation was incorporated in 2017 and claims to have chapters across the US, the UK, and Canada, and a mission “to eradicate White supremacy and build power to intervene in violence inflicted on Black communities.”

They have since scrubbed some of their earlier information from the website, but BLM is a far left-funded, global movement openly supporting abortion, transgenderism, “environmental justice,” Marxism, racism, homosexuality, the Democrat Party, and the LGBT movement. They work to dismantle white privilege, frown upon male leadership roles, law enforcement, the traditional family, and worked to “remove” President Trump.

Too many Christians are endorsing popular movements that are completely antithetical to the teachings of Jesus.

No matter how they spun it, what we witnessed in 2020 and still see today is lawlessness including millions in property damage in U.S. cities, theft, vandalism, and assaults on law enforcement. This is not to suggest everyone who sincerely marched in the streets or protested in peaceful ways were complicit, but when Christians lock arms with those who carry out evil – no matter the cause – it sends a confusing message.

We have a sin problem, not a skin problem! The Bible warns not to be unequally yoked with unbelievers. Marxism is the gospel of envy, and Karl Marx hated Christianity.

“Truly, these times of ignorance God overlooked, but now commands all men everywhere to repent, because He has appointed a day on which He will judge the world in righteousness by the Man whom He has ordained. He has given assurance of this to all by raising Him from the dead.” Acts 17:29-31

Every human being will stand before God one day and give an account for his or her actions while on earth. They will see that the cross of Christ is the great equalizer.

Study: Biden Voters Don’t Know God, the Bible
What ‘Science’ on Masks Should We Believe?