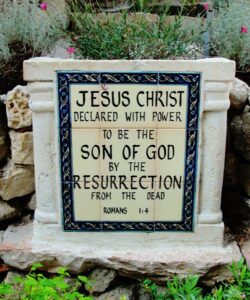 Jesus Christ is Lord and is seated at the right hand of the Father, but in order to get there, the cross had to come before the kingdom.

This week symbolizes the very heart of our faith. Jesus provides a universal offer to mankind. He invited his disciples to commune with him, prayed for all believers at Gethsemane, suffered for six hours on a cross, was laid in a garden tomb, and on Sunday rose again in victory to seal the promise of our hope for all of eternity.

Christianity is the only religion which bases its faith on a verifiable event.

In his letter to the Corinthians, the Apostle Paul summed up the gospel and testified to some of the appearances of the risen Lord Jesus.

For I handed down to you as of first importance what I also received, that Christ died for our sins according to the Scriptures, and that He was buried, and that He was raised on the third day according to the Scriptures, and that He appeared to Cephas, then to the twelve. After that He appeared to more than five hundred brothers and sisters at one time, most of whom remain until now, but some have fallen asleep;  (1 Corinthians 15:3-6)

The disciples truly saw the resurrected Christ. Only an event of this magnitude could turn scared, scattered, and skeptical disciples, with no prior concept and expectation of a crucified and risen Messiah, into courageous proclaimers of the gospel willing to suffer and die for their belief that Jesus rose from the grave.

What was their motive if it wasn’t true? Christianity faced huge obstacles as a brand new movement. They had no money, they taught about love, faith, sin, and self-denial, and they were subject to intense hatred and persecution. Most of the disciples were killed for their faith, following the example of their Messiah.

On ‘Good Friday,’ the Lord was brutally beaten, tortured, and crucified. According to Isaiah the prophet, He was barely recognizable as human. So why call it good?

“Did earth or heaven ever witness a sadder spectacle than this? In soul and body, our Lord felt Himself to be weak as water poured upon the ground. The placing of the cross in its socket had shaken Him with great violence, had strained all the ligaments, pained every nerve, and more or less dislocated all His bones. Burdened by His own weight, the impressive sufferer felt the strain increasing every moment of those six long hours.”

He went on to say you and I could not have endured the immense pain Jesus did and remained conscious. Remember this the next time you kneel before your ascended Savior, Jesus, the only way to the Father in heaven. His great work was finished.

Most skeptics have likely never examined the overwhelming evidence of the resurrection, what Luke refers to as “infallible proofs.”

It’s also important to note that even liberal scholars and historians agree on the following basic historical facts:

Next, how do you explain the fact Christianity rapidly expanded in the first century? Eye-witness testimony helps, but it had to be true. Jesus did what He said He would do: suffer for our sins, die, rise from the dead, and provide salvation for those who believe.

“there is salvation in no one else; for there is no other name under heaven that has been given among men by which we must be saved.” 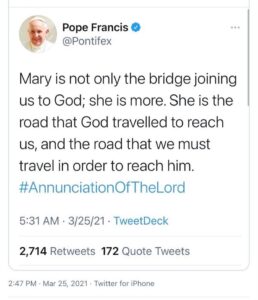 But pope Francis recently said it is not Jesus, but Mary who is the bridge joining us to God. This is not only confusing to those who are ignorant of the truth, but is denying the deity of Jesus Christ. He is the only risen Savior who sits at the right hand of God, and has an unending priesthood according to the Scriptures. Jesus said, “I am the way, and the truth, and the life; no one comes to the Father except through me (John 14:6).” And…

“I am the resurrection and the life. He that believeth in me, though he die, yet shall he live.” John 11:25

And… “Do not call anyone on earth your father; for only One Is your Father, He who is in heaven” Matt. 23:9

“For there is one God, and one mediator also between God and mankind, the man Christ Jesus, who gave his life as a ransom for all;” 1 Timothy 2:5

The pope has referred to Mary as the “Mother of God” or the “Gate of Heaven.” We can believe the Bible or we can believe a religious leader. God or man?

Jesus said, “heaven and earth will pass away but my words will never pass away.” And…

In my 2017 book, “Redefining Truth,” I expose false religions, cults, and heresy in the last four chapters of the book, and discuss the pope, Mariology, and Roman Catholic Church doctrines added thru the centuries. Nowhere, for example, does Scripture state that in order to keep the church from error, the authority of the apostles was passed on to those they ordained. (ie Peter) To the Church of Rome, Mary has, for centuries, been revered, some would say worshipped. Others would say Mary is an idol–an object of worship and veneration by Catholics.

This is important because millions do not know the authority and sufficiency of Scriptures nor what the whole Bible teaches about Jesus being God – from Genesis to Revelation and everything in-between. So the focus must be on the only Lord and Savior, Jesus.

Back to prophecy. What are the odds of one man fulfilling predictions made hundreds of years earlier? We tend to forget how many Old Testament prophecies Jesus fulfilled and how miraculous this is in itself. For a quick refresher, here are a handful of them:

Fulfilled prophecy is more proof of the deity of Christ. Archeological discoveries confirm the reliability of the Bible. But if Jesus was not raised from the dead, then we’re without hope and without God in this world. This life would be as good as it gets.

Fortunately, truth wins, and all the evidence of the resurrection demands a verdict. Anyone living around Jerusalem could have examined the empty tomb for themselves, and thousands probably did go to the tomb of Christ to look for His body.

The Word of God has stood the test of time and as Jesus said, it endures forever.

After thousands of years of attacks, opposition, and scrutiny by critics − warfare that no other work has ever seen − the Bible has withstood the onslaught, has gained credibility, and the Christian faith has continued to thrive throughout the world. No other written work has the power to convict people of their sin, the ability to change human nature, and offers a permanent solution to man’s greatest problem.

“Therefore let all the house of Israel know assuredly that God has made this Jesus, whom you crucified, both Lord and Christ.” Now when they heard this, they were cut to the heart, and said to Peter and the rest of the apostles, “Men and brethren, what shall we do?” Then Peter said to them, “Repent, and let every one of you be baptized in the name of Jesus Christ for the remission of sins; and you shall receive the gift of the Holy Spirit. For the promise is to you and to your children, and to all; …as many as the Lord our God will call.”

Do you know Him? This isn’t about religion, it’s about having peace through a relationship with the living God who will one day judge every person, the living and the dead.

We serve a risen Savior who is returning soon, as promised. But He will not return as a lamb, but as a conquering King, the Lion of Judah worthy of all praise and glory due His name! Trust in Jesus, live for Him and not the things of this world. And fear not, He is with us until the end.