I think we can all use some good news this week.

In good news you probably missed, the US Supreme Court ruled Monday 8-1 in favor of free speech and justice for those whose rights have been violated by government officials. The Court sided with a former Georgia college student who sued his school five years ago after officials prevented him from sharing his faith on campus.

Alliance Defending Freedom (ADF) general counsel, Kristen K. Waggoner said this is a win for all Americans, no matter what your faith, politics, or ideology. Cancel culture is ripping through our land and we need more cases to stop the madness and side with the Constitution and religious freedom. This one did just that!

His name is Chike Uzuegbunam. One courageous young man who took a stand for Christ and freedom, and whose case not only caused Gwinnet College to change its policies, but made it all the way to the Supreme Court.

So, what happened? College officials stopped Chike not once, but twice, from peacefully sharing his Christian faith with fellow students on campus after demanding he jump through hoops to use a tiny “speech zone” that was open ten percent of the week. Georgia Gwinnett College argued that Chike’s speech should not receive constitutional protection.

Here’s what Chike Uzuegbunam stated prior to the case:

“[N]onetheless I got the permission I signed documents i indicated what time and what place I was going to be there I indicated the content of my message I even submitted the literature it doesn’t be handing out and two police officers came and stopped me again I just felt frustrated I felt confused why would you encourage debate or vigorous conversation on campus and then you’re telling me to stand in a spot in order for me to share my faith.”

The Bible says “God so loved the world that He gave His only Son,” Jesus, as a sacrifice for our sins, and whoever believes in Him might have everlasting life (John 3:16). If this sounds hateful or intolerant, then you have the problem. 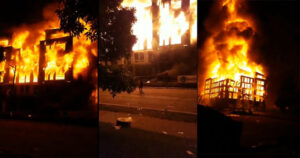 Stop and think about this for a minute. Last summer, thousands of arsonists, looters, vandals, and even murderers had free reign and free speech in any and every public place in America as billions of dollars of damage was done in cities across the country by a godless, globalist, Marxist network.

And here is a young man who followed the law, did what the college required, got permission to speak on his own college campus – and the police showed up.

Something’s drastically wrong with this picture! These Democrat double standards have to be exposed. You and I need to speak up as well. In case you haven’t noticed, our freedoms are being threatened.

“The universities are supposed to be about the free exchange of ideas as we’re raising the next generation of leaders. They should be able to speak freely on their campuses. That’s one reason why this case is so important and it’s also why it crosses ideological lines. It doesn’t matter what your viewpoint is, you want to be able to express that viewpoint and to engage in debate. If the government has no consequences for violating our constitutional rights then what’s the point of having those rights in the first place?”

Chike mentioned that other students were also met with the same opposition he was met with, and added,

“When we live in a country where free speech is being silenced, it’s no longer free anymore, and a win for me would be a win for all of us.”

An 8 – 1 nearly unanimous Supreme Court ruling is an excellent sign as we will likely be seeing many more cases as the Biden Harris administration clamps down on believers and churches. First Amendment advocates call this decision a huge win for free speech and religious expression.

If you think sharing the gospel is important, I’m sure you agree.

It is interesting that just over three years ago ADF presented oral arguments before the U.S. Supreme Court on behalf of Colorado cake artist, Jack Phillips. In the case, Kristen Waggoner stood before the Supreme Court bench, looking up at the nine justices.

The courtroom was packed with spectators in the high profile case, and just after 10 a.m., Chief Justice John Roberts opened to hear argument in the Masterpiece Cakeshop versus Colorado Civil Rights Commission case.

Waggoner only got one sentence our before Justice Ruth Bader Ginsburg interrupted with a question. After that, the questions just kept coming from all sides. Waggoner simply said,

“…The First Amendment prohibits the government from forcing people to express messages that violate religious convictions.”

Fortunately, ADF advocated for the right of all Americans to freely live and work consistently with their beliefs, and the Supreme Court affirmed 7-2 that the government can’t discriminate against people of faith by targeting them with hostility.

With today’s courts, who knew how the case would go in the alleged ‘free speech zone’ controversy, but once again, this was a win for all Americans. For those keeping score, Alliance Defending Freedom has won 11 Supreme Court cases since 2011.

I hope this will be a reminder to government, to universities, and public officials who think it’s okay to violate constitutional rights, but I won’t hold my breath.

We’ve seen it all too often. If those in power will not hold tyrannical leaders accountable, it undermines the nation’s commitment to protecting constitutional rights, and emboldens government leaders to engage in future violations.

“that if you confess with your mouth Jesus as Lord, and believe in your heart that God raised Him from the dead, you will be saved; 10 for with the heart a person believes, resulting in righteousness, and with the mouth he confesses, resulting in salvation.” Romans 10:9-10

God’s Will No Concern to Congress?
Cartoons Cancelled But Pornographic Grammy’s Celebrated