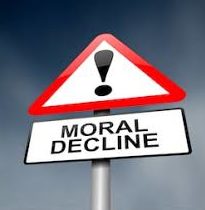 How much more filth disguised as entertainment has to be displayed before people revolt over the onslaught of blatant, in-your-face, offensive so-called art forms? Are Hollywood and the music industry immune from any censorship of the most repulsive, vile content?

Author of Blackout, Candace Owens believes America cannot survive this immorality. We cannot be sustained under these hyper-sexualized, leftist values. According to the Gateway Pundit:

Our culture is being corroded on our watch! Where is the outcry from concerned parents?

Too many Americans have forgotten how to blush. There’s something wrong when children’s books, cartoons, and food products are banned or cancelled, but nudity, profanity, and pornography are not.

The good news is the 63rd Grammy awards show suffered one of its lowest ratings in history, down 50% from last year. The bad news is eight million people still watched the celebration of godlessness on Sunday. How many viewers do you think were teenagers and young children?

Tucker Carlson declared that the left, the powers that control programming are intentionally degrading our culture. His guest on Monday was Candace Owens who said these kinds of demoralizing displays that portray women as sex objects are keeping young women down in our society.

Listen to what she said about cancel culture:

“Dr. Seuss, gone, Mr. Potato head, problematic – not enough genders available. …going through the supermarket is a traumatizing experience; we lost Aunt Jemima last year, we lost Land of Lakes butter, we lost Uncle Ben and his rice last year because everything is so traumatizing for children to look at.

…But this; what we were looking at last night was a lesbian sex scene being simulated on television! And this is considered feminist, it’s iconic, it’s forward, it’s progressive, it’s the way the world’s going, Tucker, … I one hundred percent agree with you in the assessment that this feels more sinister.

This is starting to seem like it’s not even left or right, it’s not a political issue. This seems like an attack on American values, American traditions…. This is not about diversity anymore, it’s about perversity. We are celebrating perversity in America.”

She’s right. It seems perverse and sinister because this is demonic. Forces of darkness in high places are driving this decay of our culture. God’s judgment is coming. Celebrity elites think they are their own gods – but they’re in for a rude awakening.

Scripture warns about those who are wise in their own eyes, and in Isaiah 5:20,

“Woe to those who call evil good, and good evil; Who substitute darkness for light and light for darkness;

Imagine young children watching as the disgusting rappers, Cardi B and Megan Thee Stallion twerked on stripper poles and rolled around on a giant bed. In primetime. Nice.

But no one is cancelling depraved music or perversion. Do you know what they are cancelling? Amazon removed the documentary, “Created Equal: Clarence Thomas in His Own Words,” and they did it during black history month! The film was one of the top-streaming documentaries about a prominent black conservative.

But an X-rated song by an ex-stripper who, according to reports used to drug men and steal from them, is promoted. What’s wrong with this picture?

Back to Sunday’s 2021 Grammy Awards. Beyoncé won for a song called “Black Parade.” While accepting the award, she said she wanted to “celebrate all the beautiful Black queens and kings that continue to inspire …the whole world;”

A performer known as H.E.R. won a Grammy for her George Floyd-inspired song, “I Can’t Breathe.” Referring to last summer’s riots, she mentioned “that fight we had” as buildings burned, stores were looted, cops assaulted, people lost businesses and others were killed. She openly encouraged the violence during her acceptance speech.

Talk about things being upside down.

You might be saying ‘this doesn’t affect me and my family; you didn’t watch the Grammy’s and you don’t approve of Antifa, BLM, and violence for any cause. The problem is this corrupt culture has been justifying and pushing these things, influencing public opinion.

I was reading the Gospel of Matthew this morning, and Jesus warned about those who lead others to stumble:

Whoever receives one such child in My name, receives Me; but whoever causes one of these little ones who believe in Me to sin, it is better for him that a heavy millstone be hung around his neck, and that he be drowned in the depths of the sea. “Woe to the world because of its stumbling blocks!  (Matthew 18:5-7)

Christians must stop accepting or justifying sin. We are to avoid conforming to the world, and this includes so-called ‘entertainment.’

One way the left deceives our society is they commandeer language, remove any fixed absolutes, and moral restraints. Then they anoint themselves as authorities to manipulate and steer the culture. Consider the new meanings they have given to words like ‘diversity, equality, empowering, inclusion, and tolerance.’