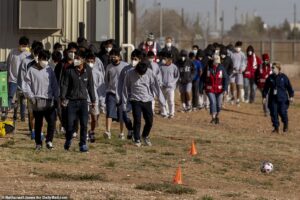 According to reports, large migrant groups are crossing the border into Texas, 24K in just two weeks. Another 13K unaccompanied minors have been in Border Patrol custody five days or longer – well beyond the legal limit of 72 hours. But Biden’s DHS Secretary is on record saying that if foreign parents send their children to the border, “we will care for them.”

America is the most charitable nation in the world, and if we love our neighbors, the Christian thing to do is help them; to care for orphans, widows, and those in need. But we are also a nation with laws and a constitution, and we cannot be sustained for long with the overwhelming numbers of people pouring into America.

Over 3,800 migrants are being held at just one facility in Donna, TX, which is approximately 1,550% over its capacity of 250. At some point, doesn’t our government have the responsibility to follow the law, care for its own citizens first, not waste our money, and protect our national borders?

The O’Biden administration however, is spending $86 million in taxpayer money to house migrants in hotels – planning to lodge them for six months, but according to reports, that “could be extended and expanded.” Add to this amount meals, transportation, healthcare, and education, and we can easily see why many U.S. citizens are fed up.

As expected, Biden’s border crisis is racking up costs. It’s almost as if it is on purpose.

The skyrocketing numbers of illegal immigrants crossing the southern border haven’t been seen for twenty years. According to reports, the U.S. encountered over 100,000 individuals attempting to cross the border in one month – February alone!

“The Biden Administration has been an abject failure when it comes to ensuring the safety of unaccompanied minors who cross our border; “The conditions [these] minors face in federally run facilities is unacceptable and inhumane.” 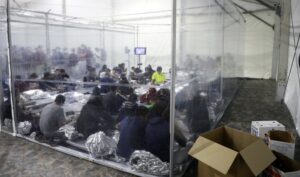 Under Biden Administration orders, Customs and Border Protection (CBP) still won’t allow media to access the overcrowded migrant facilities. I wonder why. But now disturbing photos have emerged from behind the curtain, and Americans are seeing what’s really going on.

Some say this is all on purpose, that it’s part of a plan to collapse the current systems. But who would want to overwhelm our systems?

The Cloward-Piven political strategy of calculated chaos was first conjured up in 1966, by two leftist Columbia University sociologists, Richard Cloward and Frances Fox Piven. The main goal was the creation of chaos resulting in a political crisis “that could lead to legislation for a guaranteed annual income and thus an end to poverty.”

Naturally, what follows is another government program of income redistribution allegedly necessary to help the poor get out of poverty. Progressive president, Lyndon Johnson presided over the Great Society in the 60s, one of the biggest expansions of government programs in our history. And today, poverty is worse than ever.

But the Cloward-Piven strategy to collapse America is not just about immigration and poverty, here are some of the main goals of Democrat Socialists and other radicals:

Check, check, check. Does any of this sound familiar?

It all seems to be coming together for those who hate America. COVID restrictions and suffocating lockdowns caused such an economic disaster, an entirely new dependency class was born. Add to that tens of millions of illegal immigrants, and the cost to taxpayers is rising dramatically. How much can our system handle?

Maybe I’m skeptical, but this national damage appears to be self-imposed. The Democrat media and Biden progressives are avoiding the word “crisis” because they know that what we’re seeing is a direct result their 2020 Biden Harris campaign promises – not to Americans but to illegal immigrants, and now a result of their policies.

None of this should be surprising. But what a difference an election and a new administration makes. Instead of building border walls, we’re paying for detention centers.

There’s no crisis at the southern border, it’s just a ‘challenging situation.’ The O’Biden administration isn’t putting kids in cages like that evil Mr. Trump, they’re in temporary holding or ‘relocation’ facilities.

And what about the Rona virus? Americans traveling outside the U.S. are required to have a negative test before they’re allowed back in the country, the Biden administration is letting untested foreigners stream into the country in massive numbers. Hundreds have tested positive at the Texas border alone.

This is not rocket science. The maddening thing is they know how to solve the problems; return to ‘America First’ Trump administration policies. But we know they won’t, so the next solution is look to 2022 and start removing radicals from office. Vote them out and keep them out.

In the meantime, pray! Pray for this country because these and other threats to our freedoms, capitalism, and to our preservation as a nation are very real, and we will likely never be the same again.