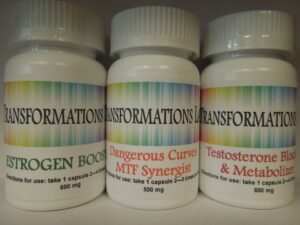 In 2015, Planned Parenthood began offering hormone replacement therapy, which is incredibly expensive, and found a way to get taxpayers to cover it. They bill insurance companies and place confused teenagers on Medicaid. All this with a simple signature on a consent form.

The love of money is the root of all kinds of evil, and Planned Parenthood has found another lucrative “service” which comes at the expense of children’s lives.

According to a former staffer, no doctors were present to evaluate the girls at Planned Parenthood and the children were not always accompanied by a parent. For confused kids who were displaying signs of emotional and mental health issues (according to reports), in what sane universe is giving them hormones good for them?

Is there something other than money driving this new demonic behavior? Jim Sedlak of the American Life League reminds us Planned Parenthood is and always has been a population control organization. Sedlak states:

“The more females you can get to think that they’re males, the better off you are in achieving population control; …”As soon as they sign the form, Planned Parenthood can’t be responsible for anything,” Sedlak explains. “It is the young girl who is responsible, and so Planned Parenthood is off the hook, legally. They’re getting tons and tons of money, and our children, especially our high school children, are under attack.”

There you have it. No responsibility and no accountability. Easy money. Just like encouraging teenagers to have sex and get pregnant, as long as its customers keep coming back, the abortion mega-business is thrilled. And they now have a new revenue stream.

Abigail Shrier is a journalist for the Wall Street Journal and author of the book, “Irreversible Damage: The Transgender Craze Seducing Our Daughters.” She interviewed the woman who said her job at Planned Parenthood involved providing hormone prescriptions to teenage girls who identify as boys.

The former worker said, “trans-identifying kids are cash cows,” and are sadly kept on the hook for follow-up appointments, bloodwork, and meetings. Even more disturbing is the clinic manager who handled treatments of testosterone and other hormones had “no prior medical experience,”

And worse, many children being treated had suffered emotional and mental abuse! These people need to be investigated and jailed, but they are protected by big government, the Democrat media, and a powerful and intimidating LGBT lobby.

These people suppress the truth, and have been given over to a depraved mind as described in Romans 1.

God created the heavens and the earth by His great power, and also created mankind, male and female. He established natural marriage between one man and one woman, (Jesus confirmed all this in the gospels) God established the family, values every human life made in His image, and encourages procreation.

Demonic minions of the left in America oppose all this.

Many former LGBT individuals are coming forward and telling their stories, including the damage that is being done to millions of lives.

Jeffrey McCall once lived as a transgender woman and was recently interviewed on CBN’s “The Prayer Link.” He said confused young people struggling with their identity need to know the truth of the gospel and be set free. Those who are being hurt and those who are deceived are “being used by the enemy in the LGBTQ community and in Hollywood to push things that are anti-God;”

“I don’t think it is the people in those communities that we should be against, but I definitely think it’s the spirit behind it, the spirit of anti-Christ. …to be your own God and to do your own thing, so I think we have to tackle the spiritual aspect…”

The Bible says, “our struggle is not against flesh and blood,” but we war against spiritual forces of darkness. And the agendas of the left are dark. Despite human suffering and many casualties, they will lie and use any means to reach their demonic ends.

But if they don’t turn to Jesus, their own end is coming. Judgment is coming, and God will separate the wheat from the tares. Don’t wait until that Day to get right with Him.