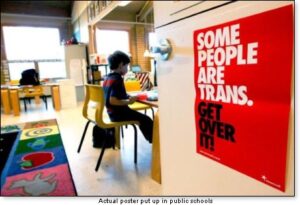 If men are women, then truth, science, and sanity are history.

A new study reveals 74% of generation Z embrace moral relativism. And Twitter censors another Christian organization for referring to a biological male as… a male. Wait. There just might be a connection here between moral relativism and transgenderism.

How are these two stories related? Children are taught to think that truth and facts change, and adults in the tech world think it is normal to be born one gender and change to the other. You’ll be cancelled if you affirm the opposite.

Young adults now believe truth can change and so can the meaning of what a man is and what a woman is, and they think children can now choose their gender. Social media giants such as Twitter are suspending the accounts of those who simply state biological facts – about gender. Talk about being anti-biology!

This is called Redefining Truth. There’s even a good book on the topic. 😉  Remove God as Creator of all things, deny scientific realities of male and female, redefine natural marriage and family, and remove moral absolutes and guess what? Anything goes!

The godless left controls every major institution in America.  God has warned about His coming wrath “against all ungodliness and unrighteousness of people who suppress the truth.” They are doing this to innocent children and many will be scarred for life.

It should be alarming to us that 74% of young adults down to 12 years old at least somewhat agree with the notion that what is “morally right and wrong changes over time, based on society.” Not based on any fixed laws or truth, but on society.

By this reasoning, if God’s laws now change along with right and wrong, then throw out the Ten Commandments. Wait, never mind – they already did that in the early 1960s.

Thank you, government-run schools for contributing to the decay and moral decline of our society. Because of the deception of this gender surrender, it makes sense that when these kids grow up and work at these Democrat-run tech companies, they’re going to go after those who disagree with their warped worldview.

Twitter suspended the account of a Christian-based family organization’s magazine, The Daily Citizen, a publication of Focus on the Family. There’s now a hash tag going around that simply asks #AreWeNext?

What was the offending tweet? It simply described President Biden’s pick for secretary of health in his administration, Rachel Levine.

“Dr. Levine is a transgender woman, that is, a man who believes he is a woman.”

Is that a true statement or not? Aside from what the Bible teaches about God creating them male and female and telling them to procreate, this is biologically accurate. But Democrats always insist they are following the science.

President of Focus on the Family, Jim Daly responded:

“As I’ve noted before, Big Tech titans are the new emperors of the twenty-first century, wielding an inordinate amount of power by silencing individuals and organizations that don’t comport or cave to their political or social point of view,”

By the way, Catholic World Report also got cancelled for a similar statement that Twitter classified as “hateful conduct.”

For saying a biological man identifies as a transgender woman, big tech will now punish you. Tell the truth and the liberal big tech conglomerate will silence you. How’s that for tolerance?

This toxic environment has been spreading like a deadly virus for years, so none of this should surprise us. Abraham Lincoln once said:

And today, the philosophy and worldview in the school room in one generation is now running government, Hollywood, media, corporations, and big tech companies as well!

Christians and conservatives; freedom-loving Americans, stay rooted in the firm foundation of God’s Word. Jesus is the truth.

When big tech Democrats can shut down the speech of whomever they want for ridiculous reasons, and when an overwhelming majority of young people under 30 actually think morality changes based on what’s popular in society or how people feel, we are in serious trouble.

If the foundations are destroyed,
What can the righteous do?”

When a society’s underpinnings are removed, confusion reigns and people will suffer. I just hope they turn to the truth before it’s too late. There is a coming kingdom where righteousness will reign. This present system is temporary, God is everlasting! Psalm 119:160 states:

“All your words are true; all your righteous laws are eternal.”

The Left’s Idea of Unity: No Opposition
For the People Act is Really For the Democrats