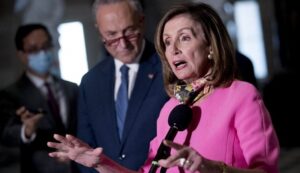 It’s back! Nancy Pelosi’s Democrat power grab, H.R. 1, also known as “For the People Act,” died last year as it had no chance of passing the Senate. But now with Democrat control of the House, Senate, and the presidency, here it comes again!

The provisions of this bill would take power from states and federalize elections, the very opposite of what most people in America want. But hey, that’s never stopped tyrannical politicians before.

So why does this matter? According to the Heritage Foundation, H.R. 1 micromanages the election process and imposes unconstitutional mandates on states. The bill interferes with the ability of states and their citizens to determine qualifications for voters and to ensure the accuracy of voter rolls.

As if election integrity is not already a massive problem in this country, the Democrats want to make it worse.

Also, notice how the left gives these radical bills such wonderful sounding names. Like every other attempt at gaining power, the For the People Act is deceptively named.

Remember every voting issue and election concern in 2020? Democrats want to make those the law nationwide. That’s right. H.R. 1 uses key elements of California’s election law as their leftist guide, opening the door for less secure ballots as well as other provisions that help cheaters cheat.

One huge concern to Christians and conservatives is that the For the People Act would force religious nonprofits publish the names of their donors! Then they can cancel whoever gives money to Republicans.

Notice that Democrats never have to worry about being cancelled or intimidated and bullied into submission when it comes to who they support in elections.

Do you see why H.R. 1 is a top legislative priority of Nancy Pelosi and Chuck Schumer? Forcing nonprofits to disclose the identities of their donors would create a public database for anyone to search and identify who is donating to conservative or Republican groups.

Remember what happened to Senator Josh Hawley last month? A mob outside of the Missouri Republican’s home in Virginia attempted to intimidate his family and vandalized his property. His wife had to file a criminal complaint against the organizer of that protest.
At the time, Josh Hawley was not home, and helplessly tweeted this:

“Tonight while I was in Missouri, Antifa scumbags came to our place in DC and threatened my wife and newborn daughter, who can’t travel,” Hawley tweeted. “They screamed threats, vandalized, and tried to pound open our door. Let me be clear: My family & I will not be intimidated by leftwing violence.”

Republicans who supported Donald Trump continue receiving threats. And Democrats want our names to go public so they can bully into silence whoever doesn’t comply?

Here are some lowlights of Pelosi’s H.R. 1, aka For the People Act:

By the way, in a “Just the News” daily poll, 77% of registered voters do in fact want to protect elections and favor voter ID laws. This is a good indication that people generally do want fair elections. It’s the Democrat party leaders and liberal media activists that we need to oppose.

You don’t think this is all about gaining more power? Joe Biden has signed over fifty (50!) executive orders in three weeks. Let that sink in. We must not stop speaking, raising awareness, and exposing deeds of darkness!

Especially in a nation such as America, we must not be intimidated into silence by the racial left, and we must continue fighting to maintain our freedoms.