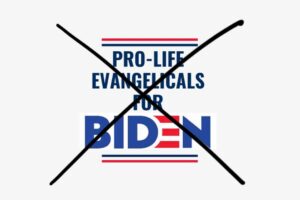 Something doesn’t add up. With all that we know about how extreme and radical Joe Biden and Kamala Harris are, please help me understand the rationale behind those who claim to be Christian, conservative or pro-life and can vote for the Democrat Party anymore.

It’s one thing to say Donald Trump is personally offensive and you’re not going to vote in this election. But to say Trump is so offensive that you’re willing to abandon your convictions and faith, and endorse a candidate whose policies are diametrically opposed to all you claim to believe in and value seems to be completely flawed logic.

Am I missing something here? You cannot in good conscience justify this horrific evil that takes an innocent human life. How can this be explained?

Cognitive dissonance is when a person’s behavior doesn’t line up with their beliefs. The dictionary definition is, “the state of having inconsistent thoughts, beliefs, or attitudes, especially as relating to behavioral decisions and attitude change.”

If you believe God’s Word but when it comes to voting, you go against what the Bible teaches, you are in contradiction which causes internal stress. A person claims to be one thing but acts like the opposite.

Just because you can’t stand President Trump, are you really willing to allow the removal of God, the dismantling of the Constitution, the expansion of abortion, discrimination against Christians, and America to be weakened morally, economically, and militarily?

That will be the end of the United States.

If you’re wondering how so many people who consider themselves spiritual, religious, or even Christian can vote for a Party whose platform is in my opinion, demonic, understand the cult-like nature of modern liberalism.

Political liberalism is one thing; we know exactly where Democrats and others on the far left stand by the politics they endorse, and other than deceivers such as Nancy Pelosi, they make no claim to know the same God we do or live by biblical principles.

But religious liberals are the dangerous ones, because they are either ignorant of what the Bible actually teaches or they actually believe the same things as the far left and yet, claim to be Christian! This is confusing to lots of people.

To prove my point, I just learned about an actual group called “Pro-Life Evangelicals for Biden.” Talk about cognitive dissonance and denial.

Joe Biden has repeatedly stated he would “pass legislation making Roe the law of the land,” which lines up with the Democrat platform to “repeal the Hyde Amendment and codify Roe v. Wade.”

They say other issues outweigh the right to life for babies but in their conscience they know abortion ends pre-born human lives and is unethical, if not pure evil. They say “poverty kills millions every year. So does a lack of healthcare, smoking, and racism.

Their website also states that, “unless we quickly make major changes, devastating climate change will kill tens of millions.”

And you can prove this, how?

In an article at AFA.net, Dr. Michael Brown writes:

“I agree that poverty kills, but Trump’s economic policies have helped alleviate poverty, not accelerate poverty. As for lack of healthcare, both parties want good healthcare for all Americans, but simply differ on the best way to achieve that. … As for climate change and what should be done about that, there is intense scientific debate about the subject.”

Posing as evangelicals, they go so far as to say, “even as we continue to urge different policies on abortion, we urge evangelicals to elect Joe Biden as president.”

The bottom line is that by ignoring the shedding of innocent blood they are so out of touch with the Bible and reality that their position cannot be justified – especially in light of the fact we now have the strongest pro-life president in history. Period.

Liberals claiming to be Christian call for diversity, tolerance, and the uniting of all religions but it is clearly a war against the truth. To them, the most important thing is not what God’s Word says but the loving thing to do is whatever compassionate liberals decide is right.

Their form of Christianity is based upon feelings instead the authority of Scripture. They have replaced biblical teachings on sin, hell, repentance, and salvation by grace – with good works, social programs, and community service.

One result: many in our society live as if the Ten Commandments are ten suggestions. Barna Research has revealed that only 34% of American adults believe moral truth is absolute, with the lowest percentage of believers being between eighteen and twenty-five years old.

Most liberals deny the deity of Christ, the fact that Jesus is the only way. They preach a different gospel from what was preached by the apostles concerning the necessity of Christ’s atoning death and they teach a social gospel in its place.

Some liberal churches go so far as to embrace homosexuality as an alternative lifestyle while the Bible repeatedly condemns its practice. The basis for much of their theology is that there is some inner goodness in man that does not require a rebirth by the Holy Spirit through faith in Christ.

By denying our sin nature and the fact that Jesus died so that we might be forgiven and live, liberals create a false god according to their own liking.

Let’s look at a bit of church history in America.

Founder of Western Theological Seminary, J. Gresham Machen took a stand on what was known as the Five Fundamentals of the Christian faith. In 1921 he said the chief modern rival of Christianity is liberalism. That was a hundred years ago. Machen concluded that the teachings of liberalism show that “at every point the liberal movement is in opposition to the Christian message.”

“Evangelical Christianity has suffered nothing but a series of defeats for decades. In virtually every area of culture, evangelical Christianity has been placed on the defensive. The terrible octopus of liberalism, which spreads itself through our Protestant Church, has dominated innumerable organizations, pulpits, and publications, as well as seminaries and other schools.”

That was nearly 80 years ago! That brings us to 2020 and the abortion battle in church and culture.

“[P]lease, someone help me understand the argument that Trump is not conservative enough, so to fix that we should cast a vote for:

I don’t claim to be a smart man, but I need to understand in what universe that approach even borders on making sense.”

This is a worldview issue. One without God and focusing on power and control, compared to a worldviedw that includes God and focuses on religious freedom and morality. The Bible says,

“For no man can lay a foundation other than the one which is laid, which is Jesus Christ.”
1 Corinthians 3:11

If your faith is established on the word of truth, you won’t have to deal with the hypocrisy of cognitive dissonance. Please encourage people to look at policies rather than get hung up on personalities. Examine your heart, know the platforms, and please vote.