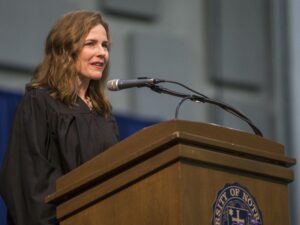 After the first debate between Joe Biden and president Trump, if you think it lacked substance and are a little disappointed or frustrated, welcome to the club. But remember a major reason people vote for a president: appointing judges and nominating Supreme Court Justices.

But I digress. If Joe Biden is Catholic and Nancy Pelosi is Catholic, then why are they attacking Amy Coney Barrett, who is also… a Catholic? Do their lives and worldviews line up with their religion? Biden and Pelosi have completely different visions for America than Barrett.

But they can’t all be right. Someone’s life and morality doesn’t jive with church doctrine and what the Bible teaches. So what’s really behind the attacks on Amy Coney Barrett?

Judge Barrett said to the graduating class of Notre Dame Law School that their “fundamental purpose in life is not to be a lawyer, but to know, love, and serve God…” She stated: “always keep in mind that your legal career is but a means to an end; and “that end is building the kingdom of God.”

The Biden, Harris, Pelosi, Schumer, Sanders, AOC Democrats are building their own kingdom, a kingdom where liberal elites hold power. It’s all about others serving them because they are their own gods. They have no higher authority. The battle for the Whitehouse, Supreme Court, and for America can be summed up in three words: God or Man?

Amy Coney Barrett is an outstanding nomination to the Supreme Court, and is a former clerk to Justice Scalia. She’s a devout Catholic and has seven children, two of them adopted from Haiti and Democrats hate that because she practices what she preaches.

Remember Sarah Palin? There’s almost an irrational hatred toward people of faith who truly live what they believe. Have you ever thought about why there is so much disdain and intolerance toward someone who radiates a very real joy, light, virtue, and grace?

It’s a symptom of the underlying spiritual warfare and attack on the spirit of Christ. Barrett shared a few more points with graduates including advice to pray about any big move in life or career choice because prayer will help temper ambition. She seems to have wisdom as well which is another reason the left attacks her.

Senate Democrat, Chuck Schumer said he won’t even meet with the nominee.

“Her views are way to the right of the American people and as they learn about it, she will become less and less popular. … Just about everything that America believes and stands for when it comes to issues like health care and labor rights and LGBTQ rights and women’s rights. Judge Barrett stands against all of that.”

Notice he claims America is far left, godless, and liberal. Schumer, Pelosi and the Democrat extremists who want power to ruin the country deny our history. We can debate politics, elections, and the direction this great nation should go, but you cannot erase centuries of evidence proving our Judeo-Christian foundation.

God had a plan for this land going back to its founding and many would have us forget or ignore the early settlers in 1607. The weary travelers came off the ocean-torn ship at Jamestown and erected a cross. The first thing they did was kneel, give thanks to the Lord, and take communion together.

According to historical record, here’s what they pledged:

“We do hereby Dedicate this Land, and ourselves, to reach the People within these shores with the Gospel of Jesus Christ, and to raise up Godly generations after us, and with these generations take the Kingdom of God to all the earth. May this Covenant of Dedication remain to all generations, as long as this earth remains, and may this Land…be Evangelist to the World. May all who see this Cross, remember what we have done here, and may those who come here to inhabit, join us in this Covenant …”

Hmm. Pretty much the opposite of what they teach in school or what you’ve been taught if you’re under 35. This is due to the success of the leftist education takeover and their agenda to secularize this nation.

It’s not just the politicians in Washington, it’s the Democrat media doing their part to target Amy Coney Barrett. Why? They found out the shocking news that she has ties to a Christian school. Gasp! But it gets worse in their evil eyes: that school actually stands by the biblical definition of God-ordained natural marriage.

Just like Karen Pence was attacked last year for teaching part-time at a Christian school that held to biblical teachings, Barrett saw this coming.

Amy Coney Barrett was a trustee at a South Bend private school that described “homosexual acts” as “at odds with Scripture” & said marriage was between “one man and one woman” years after Obergefell v. Hodges.

Going against history and the Bible in 2015, Wren says Barrett has the audacity to still believe these doctrines “years after” same-sex marriage was normalized by the highest Court in the land.

Amy Coney Barrett was a paid speaker five times at the Blackstone Legal Fellowship, founded to show law students “how God can use them as judges, law professors and practicing attorneys to help keep the door open for the spread of the Gospel in America.”

I guess one of the things I don’t understand about Amy Comey Barrett is how a potential Supreme Court justice can also be a loving, present mom to seven kids? Is this like the Kardashians stuffing nannies in the closet and pretending they’ve drawn their own baths for their kids.”

The left simply has a different worldview and vision for America. They believe in and want church and state separate, or more specifically, they want Christian influence to be removed from every aspect of culture.

It’s hard to believe some people are actually shocked that many of us believe the Bible is true and God created civil government. This is part of the reason they oppose Barret because at 48, she’s the youngest Supreme Court nominee and she could serve for decades.

President Trump could be responsible for undoing more than a fifty-year liberal stronghold on the Supreme Court. Last week we discussed some history reminding us that since 1947, Democrats have relied on liberal judges and on the courts to implement their leftist agenda.

How big of a deal is this to the left? The first time in this country’s history there has not been a peaceful transfer of power following a change in presidents was in 2016. Instead we’ve endured over three years of resistance and revolting.

Make no mistake: this ongoing truth war is between Christianity and the religion of Secularism. U.S. Attorney General William Barr recently said what we’re seeing is organized destruction. He stated:

“Secular forces and their allies have marshaled all the forces of mass communication, popular culture, the entertainment industry, and academia, in an unremitting assault on religion and traditional values.”

The battle is over influence and control of resources in the public square.

As individuals, the church, culture, and as a nation; we are either moving toward God, His laws, and biblical morality in society – or we are moving away from God and toward godlessness, self, sin, and moral relativism where man is supreme authority.

Jesus is our only hope, friends. We must engage culture, pray, vote, and do our parts to move those in our sphere of influence in the right direction.

The Unintended Power of One Supreme Court Seat
Wait, What?! Pro-Life ‘Conservatives’ Voting for Biden?