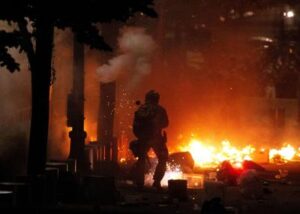 In Oakland, California, the mob burned the courthouse, vandalized a police station, shot fireworks at officers, and also hurled rocks, wood, and bottles at them. It may be even worse in Portland.

House Judiciary Committee Chair, Jerry Nadler was asked Monday about the fires and rioting in Portland, and he denied it’s even happening. He actually said, “That’s a myth…” Very few on the left have denounced the violence and destruction thinking it’s somehow justified.

So Democrats at ABC reported on the chaos and destruction, and this was one of their headlines:

“Protesters in California set fire to a courthouse, damaged a police station and assaulted officers after a peaceful demonstration intensified.”

It’s just intensified peace. The riots and violence are only fake news?

No, they’re destroying millions of dollars’ worth of property in various U.S. cities.

Mocking the Tweet by ABC about a peaceful demonstration, actor James Woods suggested a fix for the headline; a tag at the end to make it more accurate. He added, “…after the Democrat mob went wild.”

Once again, the biased media is censoring the news and redefining words to fit the progressive narrative: lawlessness good, law and order, bad.

The NYPD says more than 300 police vehicles have been damaged or destroyed in the last two months. In Seattle, at least 59 police officers were recently injured, and the complicit networks keep fueling the fire by ignoring the truth. And get this, CNN describes these protests as a “demonstration against police violence.”

But many of the demonstrators are in fact, paid agitators and criminals who smash windows, intimidate civilians, and assault those who oppose the revolution.

“What a revealing headline! The media’s robotic insistence on “peaceful” protest is completely undermined by the enumerated actions of the protesters which include vandalism, arson and assaulting police officers.”

Quick question for the media: Isn’t it a relevant and compelling fact that the Portland Police Department discovered a cache of munitions, including loaded rifle magazines and Molotov cocktails? Alleged news networks ignored this.

And who can forget CNN’s Chris Cuomo encouraging and defending the rioters when he said, “show me where it says that protesters are supposed to be polite and peaceful;”

Newsbusters pointed out NBC Nightly News correspondent Erin McLaughlin still hasn’t explained how Antifa terrorists attempted to murder federal agents by barricading them inside the Oakland courthouse and then setting it on fire. She also refused to tell her viewers that those same kinds of “mortar-style fireworks” were used against police in Portland.

“…Demonstrators [are] squaring off with federal officers in Portland, Oregon. Protests over racial injustice intensifying. Local leaders say the federal presence is only fueling this…”

CBS Evening News anchor Norah O’Donnell also took a jab at the president and sided with radical Democrat mayors who denounced the “occupation of their streets by federal agents.” Violent peaceful protests have been going on in Portland for sixty days now, and the federal agents who recently arrived are the ones occupying the city? Please.

But this is what they’ve been selling and this is what too many people actually think is happening because they only watch the agenda-driven, declining news outlets. Biden campaign operatives in the mainstream media are going to great lengths to downplay death, destruction, and mayhem.

This is political violence. It’s not just individual citizens who are being hurt, this is an attack on America itself, and it is being endorsed and used by the Democrat Party to try convincing people President Trump can’t run the country. No matter what he does, to them it’s always the wrong move.

They’re all in this together: the Democrats, the media (the same, I know), the globalists, Marxists, anarchists and socialists. The United Nations Human Rights Office denounced what they called “extreme force” on the peaceful protesters.

“The U.S. marshals have a duty to stop that and defend the courthouse – and that’s what we are doing in Portland,” Barr testified. We are at the courthouse defending the courthouse. We’re not out looking for trouble,”  Barr added, “What makes me concerned for the country is this is the first time in my memory the leaders of one of our great two political parties, the Democratic Party, are not coming out and condemning mob violence and the attack on federal courts.”

Democrat leaders in Washington and the media have cheered and encouraged massive protests – ignoring social distancing and mask requirements – in a time of a deadly pandemic. But churches must obey! More hypocrisy. Their political agenda is just too important.

If anyone cares what elites in Hollywood think, Bette Midler chimed in saying, “Trump is now in a tear-the-country-down rage…” What? This is a tactic of the left; accusing the opposition of doing the exact same thing you are guilty of doing. Liberals are pros at this strategy.

All the people who are hurting and those who have died are simply collateral damage to most of them. Expendable.

By not reporting truthfully on the effects of the violence, by opposing law enforcement and by covering for the perps, it’s clear that the media elites are driven to do whatever it takes to make president Trump look bad. Most Democrats in D.C. refuse to condemn violent riots and we better start understanding why: there’s an election in three months.

Jesus explained to His followers in Matthew chapter 24 about many signs that would take place in the last days. He described the increase of hate, pestilences, wars and rumors of wars, and also said this:

Because lawlessness will be increased, the love of many will grow cold. But the one who endures to the end will be saved. (Matthew 24:12-13)

Press on, friends, pray for wisdom, and persevere; God is still on His throne.

The media has become part of the problem and cannot be trusted. They overlook lawlessness, selectively report, and they have too much power. But their willingness to cover up this violence and their failure to serve all Americans is a new low – even for them.