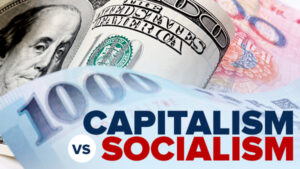 You may have heard a saying attributed to a Marxist leader in the 1960s that goes like this: “The issue is never the issue. The issue is always the revolution.”

Those behind the agenda to overthrow the governing system in America have been emboldened, and it goes back more than fifty years. For example, at the United Nations Business Conference in 1974, David Rockefeller said:

“We are on the verge of a global transformation. All we need is the right major crisis and the nations will accept the New World Order.”

Globalists are thrilled today because we don’t just have one crisis, but three at the same time.

America has had political unrest for decades, but the left ignited a revolution in 2016. Add Covid-19 and Black Lives Matter and here we are. But whatever the current “issue” is, the left will use it to distract you from what they’re really doing.

A year ago, the issue was impeaching President Donald Trump. Six months ago, the new issue became the Coronavirus – who was deemed, “essential” and who was allowed to work. Then, Memorial Day weekend the issue became “systemic” racism, and now we’re back to America being an evil country that needs to be taken down.

In addition to defunding the police and creating more lawlessness on our streets, Democrat MN Rep. Ilhan Omar just called for the ‘dismantling’ of the United States economy and political system. Watch:

They control the entire education system, entertainment industry, unions, universities, government, corporations and sports, the media, and even half the churches in the country. A majority of Millennials now say they will vote for socialist candidates. But that’s not enough, and Democrats now want to replace capitalism with socialism.

Seattle City Councilwoman Kshama Sawant said the left is preparing the ground for a different kind of society.

“Because we are coming for you and your rotten system. We are coming to dismantle this deeply oppressive, racist, sexist, violent, utterly bankrupt system of capitalism. This police state. We cannot and will not stop until we overthrow it, and replace it with a world based, instead, on solidarity, genuine democracy, and equality: a socialist world.”

A Black Lives Matter leader recently said they would burn the system down if they don’t get what they want.

Five days prior to being elected in 2008, Barack Obama said the left was ready to fundamentally transform the United States of America. And after eight years, we were a much different country with more division based on class, gender, race, and religion.

So last month at the World Economic Forum (WEC), wealthy elite business and government leaders gathered in the hopes of furthering the agenda achieve a one world government; to “reset capitalism” and the global economy.

But a strong America and free markets have always been in the way. To create a break through, our economy had to be destroyed and at the same time, the country’s social order needed to be destabilized.

One telling quote from the founder and Executive Chairman of the WEC, Klaus Schwab:

“The (Covid-19) pandemic represents a rare but narrow window of opportunity to reflect, re-imagine and reset our world to create a healthier, more equitable, and more prosperous future.”

This worldview parroted throughout academia that capitalism and religious freedom are rooted in evil is central to the socialist cause. The thinking is that everything would be better if elites had control over people and production. Environmental laws, regulations, and taxation would skyrocket, but that lacks sex appeal and has been difficult for them to sell – even with the help of Hollywood actors and Greta Thunberg.

With Climate Change losing its luster, they’re now using Covid-19 and the Black Lives Matter riots as the latest reasons to “reset” the global economy. They’re calling for all nations and all business/industries to participate in uniting the world as one.”

Sound familiar? World peace and unity. Pass it on!

Some now declare America needs a less racist National Anthem and suggest John Lennon’s “Imagine” to describe their utopian vision. No heaven, no hell, people living for today and not worrying about the future or facing judgment for their sins. Imagine there’s no God, no country, no borders, a one world government, no religion, too – and “imagine all the people living life in peace.”

Apart from Jesus Christ, here is no true peace. It’s all temporary, man-centered and fleeting. Jesus told his followers they would have trouble in this short life, but in Him we can have peace (John 16:33).

The Apostle Paul wrote to believers saying the day of the Lord’s return would surprise a lot of people, and come “just like a thief in the night.” 1 Thessalonians 5:2-5 states:

While they are saying, “Peace and safety!” then destruction will come upon them suddenly like labor pains upon a woman with child, and they will not escape. But you, brethren, are not in darkness, that the day would overtake you like a thief; for you are all sons of light and sons of day. We are not of night nor of darkness;

Think about it. Activists and radicals are wrecking parts of this country, and because most citizens value freedom and won’t be sold on Democrat policies, they think the only way to get what they want is by force.

And that’s supposed to bring peace? So-called “peaceful protesters” causing destruction and intimidation, rebelling against the authorities, tearing up cities in America, burning and painting over things, destroying federal monuments and historical statues?

Remember; the issue to them is the revolution. Oh, and Black Lives Matter.

Very few in the liberal media and Democrat Party have denounced the violence, death, and destruction in American cities. Why? A host of radicals is working against a sitting president to gain power now or in the November election. They are gleefully using the crisis created by Black Lives Matter, and that organization funded by millionaires is being used to wreak havoc on cities and overwhelm police forces.

Now Joe Biden is saying he wants to “transform America” – again! And we can speculate 90% of Democrats will vote for him. And if he were elected, not only would that be a third term for Barrack Obama, but you know who would run the country? Those who hate America and want political power. Why would people vote to elect them?

The agenda to ‘reset’ the world will eventually fail. The chaos we’re seeing on the news in our cities is all part of a smokescreen meant to prevent people fro seeing the truth, and to lure more social-justice warriors, communists, and radicals. But their pathway ends in emptiness, darkness, and death.

The Bible says Jesus is the Way, the true light that shines in the darkness. It’s not too late; trust in Him and have everlasting life (John 1:4-5).