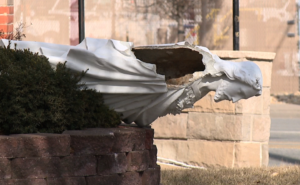 I’ve said many times that practically anything goes in our country; from the liberal media and entertainment industry to public schools and universities, to social media and government to the public square. We live in an ABC culture: Anything But Christ, and evil is being called good.

As Dr. Duke Pesta recently said, college students are now attacking unarmed statues across the country. Many activists and thugs have now gone from assaulting police, stopping traffic, burning down buildings, blowing up cars, and breaking windows to tearing down federal monuments and statues of historical figures.

The question is will they obey the marching orders of racist and radical, Shaun King, a leader in the Black Lives Matter movement. A social justice activist, King unleashed a firestorm Monday on social media saying statues of Jesus Christ are a gross form of white supremacy and must be taken down.

The New Testament describes Jesus as Jewish, being from Bethlehem in Judea, but Shaun King insists Jesus is a “European.” He said:

“I think the statues of the white European they claim is Jesus should also come down. They are a form of white supremacy. Always have been… Tear them down. He continued, “All murals and stained glass windows of white Jesus, and his European mother, and their white friends should also come down. They are a gross form of white supremacy. Created as tools of oppression. Racist propaganda. They should all come down.”

Most college educated people, especially those under thirty-five hate Jesus, the Bible, and Christians. No surprise there. We’ll see if BLM implements it’s version of Nazi Germany’s Kristallnacht or the Night of Broken Glass, by vandalizing churches and breaking stained glass windows.

But we found out a few inconvenient stories about Shaun King. According to Israeli researcher, Adam Berkowitz, in 2018, King led attacks against a white Texas state trooper, spreading the false claims of a black woman arrested for drunk driving who lied about being raped during a traffic stop.

In 2019, King led a social media campaign to find the drive-by killer of seven-year-old Jazmine Barnes. He posted a photo of a white man causing people to assume the killing was racially motivated. But then the the facts emerged, and the men allegedly connected to the girl’s death were black Believe it or not, even CNN reported the story.

Most of what’s happening in American cities is clearly not about racism. This is anti-American hatred stoked by the Democrat media and regurgitated throughout academia for decades. Check out my report last week on the godless, anti-American education system that has groomed a generation of young people to hate their country.

They fall for the lies, get triggered, and act out in hate. The preachers of inclusion and tolerance are once again the most hypocritical and intolerant of free speech and of people who are unwilling to conform to group think and follow the mob.

Cancel Culture is one thing. But the defacing and destruction of historical statues and federal monuments is getting out of control, especially when those doing the destruction have no idea what the statues represent unlike Democrat Party leaders.

House Speaker, Nancy Pelosi gave orders to remove from the walls of the U.S. Capitol building four portraits of former House Speakers who served in the Confederacy. Please understand what’s really going on with all this.

The deliberate erasure of history is a Stalinist, Maoist tactic for purposes of destroying one civilization so that they can bring in their “higher” social order (Communism, Marxism, statism). Beyond that, if you want to get rid of all vestiges of racism in the history of the United States, you would also have to also get rid of the Democratic party itself, which is the party of the Jim Crow South, the KKK, and Robert Byrd.

New York City officials are falling in line and planning to remove the bronze statue of Teddy Roosevelt from outside New York’s Museum of Natural History. The statue has stood there in the Theodore Roosevelt Rotunda facing Central Park since before the Second World War.

Why? Roosevelt was a hero to millions of Americans which is why the left must get rid of it. So, was he a racist? Nope. The opposite, in fact. Tucker Carlson explained:

“Roosevelt was a famously decent man. In 1901, he invited his friend (black author and educator) Booker T. Washington to dinner. No African-American had ever eaten in the White House. Democrats roared with rage at the idea. For the crime of having a meal with a black man, they attacked Teddy Roosevelt and his wife for the rest of their lives.”

The agenda to edit true American history began in government schools decades ago as text book publishers were instructed to erase much of the rich history of the country, and now, it has reared its ignorant and ugly head in today’s cancel culture.

Back to Shaun King for a minute. Ironically, he supported the campaign of an old white man, Bernie Sanders. Go figure. King also said white people use faith as a tool of oppression, and that “they never would’ve accepted a religion from a Brown man.”

He reveals just how ignorant he is about God, true history, and the Bible. Jesus’ ethnicity was and is completely irrelevant. Why? Jesus was God in the flesh. His blood was red just like ours, and we are redeemed by His shed blood on the cross that paid for the sins of mankind.

Pray for those who can’t see through their own hate, guilt-pedaling, and virtue signalling. Pray for Christians who have been caught up in secularism and social justice movements that really aren’t about true justice.

The Bible says whoever believes Jesus will be saved; whoever rejects Jesus and refuses His amazing sacrifice and offer of forgiveness will be condemned. In fact, we are not to recognize people according to physical attributes, class, or country of origin, but according to the spirit. Whether a person is saved or not saved.

God shows no favoritism, and once you are a believer in Christ, we are a united family in the faith. The Apostle Paul wrote to Christians in Ephesus:

For this reason I bow my knees before the Father, from whom every family in heaven and on earth derives its name, that He would grant you, …to be strengthened with power through His Spirit in the inner man, so that Christ may dwell in your hearts through faith;. Ephesians 3:15-17

Once you have the assurance of salvation, your citizenship is in heaven and status doesn’t matter. You no longer care about skin color, but the state of a person’s heart. In this current chaos and unrest, Jesus offers a solution no one else in the world offers: true peace, rest, and everlasting life.

Anti-American “Education” and the Collapse of Culture
How Should Christians Respond to Injustice, BLM, Lawlessness?