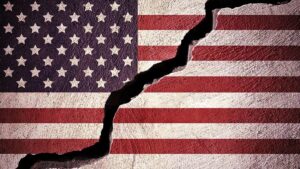 Can we actually coexist or does something have to give? Can we respectfully disagree on important issues and be truly tolerant of those who we think are wrong? Does it matter if they are intolerant of us? Here’s what it might all come down to: We convert them or they convert us.

I could go on.

The war on truth is in full swing, and battle lines have been drawn on the liberal left and the conservative right. Church and state lines have also wrongly been laid down. The media and half the country thinks we are idiotic, immoral, or intolerant for believing the Bible.

But remember, we’re all human beings made in the image of God and, coronavirus or not, death comes to us all. I know, how sobering. And if you have given your life to Jesus and believe in His name, you are a Christian first.

The Bible says our citizenship is in Heaven, but while we’re here, we are ambassadors for Christ and need to be loving and patient with others. This is hard to do especially when people are so easily triggered, defensive, and divided about politics, the Constitution, Christianity, and cultural issues.

How did it get so bad?

In a great article by John Zmirak, he writes:

“Engorged with all the power it wielded while Obama was in office, along with its total conquest of our media and academia, the left could not accept Trump’s 2016 victory as legitimate. You know, the way the South couldn’t accept the victory of Lincoln in 1860 without a single Southern electoral vote.”

It’s clear we are operating under very different rules of engagement. Many seem all too willing to lie, allow the country to suffer, for people to die, and to slander the opposition. Is it even possible for us to come together under the unifying flag of humanity in these divided states of America?

A virus with a 99.6% recovery rate is not the real danger that has made 30 million Americans unemployed. The 2017-2018 flu season left us with 61,000 deaths. No draconian measures were taken, nor was there induced fear, panic, paranoia, and hysteria like we have today.

“We know that COVID-19 is most dangerous for those with underlying medical conditions such as hypertension, heart disease, COPD, Type 2 diabetes, and obesity. Those Americans over the age of 65 have been the hardest hit…”

“We were told that COVID-19 was different, but for the most part, it is not. It is still a virus that attacks the respiratory system. And America did not respond this way with MARS, SARS, Avian (Bird) flu, or the H1N1 (Swine) flu which affected 60 million Americans [during the Obama administration].”

Sadly, this has become about who controls the narrative, about power, who should be president, and about what vision should be enacted for the entire country. We are now hearing that many deaths of Americans are being classified as caused by COVID-19, when there were preexisting severe health issues.

This is all potentially confusing and crazy. Some people are ready to crack and part of me doesn’t blame them. But let’s not make this about us, about our side, or about politics. It’s about the value of every human life. It’s about those who have tested positive for the virus as well as those who have lost a job, even temporarily.

It’s about liberty and a country with a rich history of God’s grace and tremendous blessings.

It’s also about a nation that needed a wake-up call! One that has rebelled against the living God and Creator of all things, and a church in desperate need – not of more entertainment – but of repentance.

For this reason it says,

“Awake, sleeper,
And arise from the dead,
And Christ will shine on you.”

15 Therefore be careful how you walk, not as unwise men but as wise, 16 making the most of your time, because the days are evil. 17 So then do not be foolish, but understand what the will of the Lord is. (Ephesians 5:14-17)

Redeem the time because either way, our days are numbered. Will God find us faithful? Call on the name of the Lord and be saved! Confess your sins, turn back to Jesus, then bring as many people with you as you can.

So, yes, we should rally and vote, and yes, we should fight for godly influence. We should stand for life and traditional family and for natural marriage and for capitalism. We should be vocal and active in church and state. But we should not put all our hope or effort in this life alone.

“Do not love the world nor the things in the world. If anyone loves the world, the love of the Father is not in him; …The world is passing away, and also  its lusts; but the one who does the will of God lives forever. 1 John 2:15, 17“

America’s deeper problem is not about a virus, a biased media, power-hungry governors or Washington D.C. We have a serious and terminal sin problem. We must return to God and point others back to Him while there’s still time. And pray! No one gets out alive, no matter your politics.

Democrats Don’t Believe All Women, They Believe Joe Biden
We Were Created to Work and Worship, Not Isolate