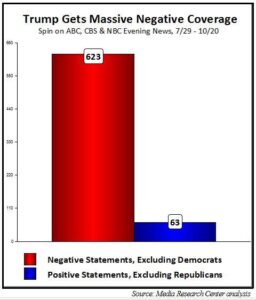 With 93% of reporting on President Trump being negative since the 2016 election, it’s no wonder American citizens distrust of the news media is at record highs.

According to new PEW Research, it’s no surprise there’s a political divide on perception when it comes to media reporting. Most Democrats love the division being caused by trashing the president, but overall, only 9% of Americans have “a great deal of confidence” that journalists act in the best interests of the people.

70% of Democrats say the media is doing a good job, but overall, only 39% have a “fair amount of confidence” the media is looking out for us. I think you see the problem here.

When it comes to COVID 19 reporting, and this is a serious issue, it’s clear even when the Trump administration does good work or has successes in responding to coronavirus needs in the country, the media will ignore or downplay any favorable news if they report it at all!

With the Democrat media campaigning against Trump and showing open hostility toward those who voted for him, it’s easy to forget why a free press was established in the first place. We need to revisit some history, remember the key principles of journalism, and expose media malpractice.

Think about the state of today’s news media and why it’s been declining decade after decade. Now let’s look at just the first two principles of journalism:

1. Journalism’s first obligation is to the truth:
The health of America depends on citizens having reliable, accurate facts and truthful information delivered to them a practical sense. This “journalistic truth” is a process that begins with the professional discipline of assembling and verifying facts.

2. Its first loyalty is to citizens:
Even though news organizations answer to advertisers and shareholders, liberal producers and news editors, journalists must maintain allegiance to citizens and the larger public interest above any other if they are to provide the news without fear or favor. This commitment to citizens first is the basis of a news organization’s credibility;

I don’t have time to mention a fraction of the studies and surveys on the unbalanced and subjective media reporting and mishandling of the news through the years. But a more foundational problem may well be their general departure from the truth.

It’s not surprising Oxford Dictionary’s word of the year for 2016 was ‘post-truth.’ We might conclude this generation has grown up with a one-sided, liberal worldview fed to them by a complicit media, a rotting entertainment industry, progressive corporate social media giants, and a declining government-run education system.

So here are six key characteristics of truth. Truth is exclusive, objective, immutable, absolute, universal, and authoritative. Today’s media have generally abandoned truth and fixed moral absolutes. For example, notice how the media report on the topics of life, marriage, faith, family, and freedom. These are major factors for a healthy society.

Just on the topic of abortion vs. life, you can see the slanted coverage. They downplay and mock the annual March for Life, they criticize pro-life legislation, call Christians hateful and intolerant, and they ignore the lies of Planned Parenthood.

By the way, GOP senators are furious and so are many Americans hearing about Planned Parenthood affiliates receiving $80 million in coronavirus relief funds from the Paycheck Protection Program. Your tax dollars at work helping abortion and the Democrat Party. After all, abortion clinics were deemed “essential” by the powers that be while churches and small businesses had to shut down.

Finally, most informed citizens understand there’s a new cardinal rule in journalism: never write anything favorable about President Trump or the administration’s coronavirus response. There’s an extensive article by Rich Lowry about the supply effort that the media buried because they love to hate Trump

The story of how the president quickly and successfully handled the potential ventilator crisis has practically gone untold, even though the Trump administration secured supplies of personal protective equipment, or PPE and got them to those in need.

Any government response to a once-in-a-generation crisis is going to be subject to legitimate criticism; …But to read the press, there is basically nothing good that the Trump administration has done over the last three months.

Decades ago or during the Obama administration in particular, these kinds of success stories would have been front page news, but the media is so blinded by their opposition to Trump, they are unable to consider occasionally giving some credit where it’s due.

Make no mistake: the media have been successful at shaping public opinion. I don’t want the media to report in favor of my worldview all the time, I’m just asking why not report truthfully – to both sides – and let the people decide.