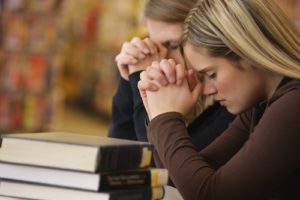 Public prayer was first banned in government schools in the early 1960s. You didn’t think the left would stop there, did you? Today, this basic expression of the Christian faith is being increasingly criticized and banned. Showing their intolerance, some on the left deny our right to pray anywhere outside our home or church.

A few cases in point: a high school football coach, Vice President Mike Pence, and pro-life students peacefully praying outside an abortion clinic. I wonder why these same people don’t also deny or mock Muslims for praying in public. I think you already know the answer. Christians are easy targets for the bullies.

Let’s start with Coach Joe Kennedy, a former U.S. Marine of 20 years and now, a former high school football coach in the state of Washington. He lost another court battle last week in the wake of his being fired in 2015. Remember why was he fired? For publicly praying after football games and allowing high school players to join him. The key word is “voluntary.”

Kennedy’s attorney, Mike Berry with First Liberty Institute said this case is about more than one football coach. It’s about the rights of all believers and public employees across the country.

The Supreme Court decided not to reverse the decision by the Ninth U.S. Circuit Court of Appeals that favored the Bremerton School district that fired Kennedy for kneeling on the 50-yard line after football games and silently praying. Another key word here is “silently.”

Players eventually joined Coach Kennedy and even some on the opposing teams, but the public school powers that be didn’t appreciate that so here we are. Four of the Supreme Court justices say a review of the case may be necessary in the future.

Next, you may have seen an official White House photo that was sent out showing Vice-President Mike Pence and the Coronavirus Task Force opening a meeting with heads bowed in prayer. Well it didn’t take leftists long to mock prayer, Pence’s Christian faith, and the Trump administration.

“Mike Pence and his coronavirus emergency team praying for a solution. We are so screwed,” 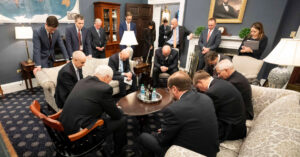 The sentiment on the left is prayer is a waste of time so take action. You might appreciate the response of Princeton professor, Robert George, saying the debate over the picture is illustrative of America’s political divide.

“I don’t know anything about Mr. Williams, but this photograph and his comment perfectly illustrate the profound division in our culture.It’s ‘obvious’ to some of us that one of the things you do in a crisis is pray. It’s ‘obvious’ to others that praying is (worse than) foolish. I appreciate Mr. Williams’ candor, and I don’t condemn him for it. He says what a great many of his fellow secular progressives think, but are careful not to say out loud. It’s much better for all of us if we are clear on where we stand.”

Regarding the coronavirus, we have not been given a spirit of fear. For those of us who understand Bible prophecy, we are warned about the potential spread of diseases and pandemics in the last days. But let’s trust God in all things. As more people think about their humanity and mortality, use the opportunity to share with them the hope of Jesus Christ and His salvation.

Franklin Graham said it was a powerful and touching photo and added,

“Thank you VP Pence and each one who is serving. Let’s join them in asking God for His wisdom, direction, & help in the response to this virus.”

From D.C. back to Washington state where pro-life students were praying outside of an abortion business over the weekend during the 40 Days for Life nationwide protest, and abortion activists threw a glass vial of liquid at them.

Attacks on the students included people driving by the group and yelling obscenities, displaying crude gestures, and one woman flashing the kids while yelling, “My body, my choice!”

Another abortion supporter pulled up in her car and said, “Satan is the one true lord!” in a video released by Students for Life of America (SFLA), and as she drove away, said “Hail Satan.”

There have been bomb threats in Minnesota and Washington, and a death threat against Kristan Hawkins, Students for Life president. I know, how tolerant!

Hawkins said the violence and ugliness on behalf of pro-abortion advocates cannot be tolerated and police should step in.

“Every day it seems like we hear of a new account of vandalism, threat of violence, or acts of intimidation towards peaceful pro-lifers; This… causes some [of] our volunteers to feel uneasy to sign up to pray for mothers and preborn children… We are only 11 days in, and we have already been bullied and threatened to the point where our volunteers are nervous…”

I love the fact Hawkins said they will not back down – and we shouldn’t either, especially for something as basic as prayer; a constitutionally-protected right. Also, their behavior really demonstrates how evil the abortion industry and its supporters can be.

Finally, isn’t it ironic that the violence of abortion – which abruptly ends life in mother’s wombs – is celebrated by increasingly violent people?” Keep praying, friends. The stakes have never been higher.