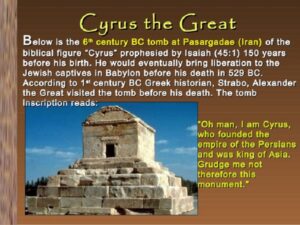 Throughout history and the pages of Scripture, God promises deliverance to Israel, and declares this nation is going to be a flagship through which the whole world will be blessed. He has proved Himself true, He has shown Himself faithful, and because of the confirmation of fulfilled prophecies we can trust that His promises will be kept.

Thus says the Lord: “In an acceptable time I have heard You, And in the day of salvation I have helped You; I will preserve You and give You, As a covenant to the people, To restore the earth, To cause them to inherit the desolate heritages; Isaiah 49:8

God has His appointed times, and that includes the reign of world leaders. The Prophet Daniel said,

“Blessed be the name of God forever and ever, For wisdom and might are His. 21 And He changes the times and the seasons; He removes kings and raises up kings… Daniel 2:20-21

He existed before time and He appoints people, events, and seasons in life.

He made from one man every nation of mankind to live on all the face of the earth, having determined their appointed times and the boundaries of their habitation, Acts 17:26

But when the fullness of the time came, God sent forth His Son, born of a woman, born under the Law, 5 so that He might redeem those who were under the Law, that we might receive the adoption as sons. Galatians 4:4-5

We are trusting God’s timing and waiting for new heavens and a new earth in which righteousness dwells (2 Peter 3:13). But the Lord has much to do – and so do we – before Jesus returns to judge and to rule. So one of today’s questions is this: can God only use believers to accomplish His purposes? is it possible for a flawed man to be a good leader? 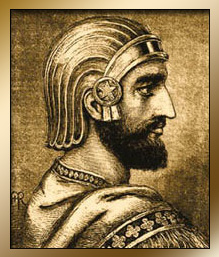 “It is I who says of Cyrus, ‘He is My shepherd! And he will perform all My desire.’ And [x]he declares of Jerusalem, ‘She will be built,’ And of the temple, Your foundation will be laid.’” Isaiah 44:28

The royal proclamations of Cyrus fulfilling this prophecy are found in the Old Testament books of Ezra 1:2, and 2 Chronicles 36:23.

Calling a bird of prey from the east, The man of My purpose from a far country. Truly I have spoken; truly I will bring it to pass. I have planned it, surely I will do it. Isaiah 46:11

God called Cyrus. Even the first-century historian, Josephus credits a pagan king named, Cyrus, with freeing the Jews from a 70-year Babylonian captivity, returning a remnant to Israel, and helping them rebuild the temple in Jerusalem. In Antiquities, Josephus relates that when Cyrus came across his name mentioned in the scroll of Isaiah – 221 years before Cyrus was even born – “he was seized by a holy desire to fulfill what was written of him.”

According to the Prophet Isaiah, King Cyrus was used as an instrument of God for deliverance in the Bible. The Mysterious Persian ruler is credited for helping Jews return from exile to Jerusalem 2,500 years ago, rebuild the Temple.

“In the long sweep of Jewish history, there have been a handful of proclamations by non-Jewish leaders on behalf of our people and our land: Cyrus the Great, the great Persian king; Lord Balfour; President Harry S. Truman; and President Donald J. Trump.”

May 14, 1948 marks the anniversary of Israel becoming a state, and it should be noted the nation was not “created” in 1948. Israel was miraculously re-gathered according to God’s will and Bible prophecy.

“Who has heard such a thing? Who has seen such things? Can a land be born in one day?
Can a nation be brought forth all at once? As soon as Zion travailed, she also brought forth her sons. Isaiah 66:8

We all know of the horrors of Hitler and the holocaust in the late 30’s and 1940s. So it’s even more astounding that over five million Jews reportedly returned to Israel, as predicted (Isaiah 11:11-12; 38:8).

Say to them, ‘Thus says the Lord God, “Behold, I will take the sons of Israel from among the nations where they have gone, and I will gather them from every side and bring them into their own land; 22 and I will make them one nation in the land, on the mountains of Israel; and one king will be king for all of them; and they will no longer be two nations and no longer be divided into two kingdoms. Ezekiel 37:21-22

You may remember from American and world history – before U.S. history books were edited and rewritten, The government of Israel proclaimed the new state on May 14, 1948 when at midnight, British rule over Palestine lapsed, and minutes later, White House spokesman Charlie Ross announced U.S. recognition. God chose to use America in its rebirth and President Harry Truman acknowledged the new State of Israel.

Never before in history has a nation or people been dispersed throughout the world and then centuries later, returned to their homeland from the north, south, east, and west (Isaiah 43:5-6).

No matter what happens, no matter what man does, no matter the wars or catastrophic events, and no matter what this world can throw at us, God is sovereign over all things. As we know from Scripture, this includes the nation of Israel. But what about America?

The Bible teaches that those who bless Israel will be blessed (Genesis 12:3) and blessed is the nation whose God is the Lord (Psalm 33:12).

Few recall what Richard Nixon did in 1973. Israel was suddenly attacked and were vastly outnumbered in manpower and weaponry during the fourth Arab-Israeli War. Egypt, Syria, Iraq, and Jordan carried out a surprise attack on Israel while Jews were observing Yom Kippur.

There was even talk of surrender days into the war as Israeli Prime Minister Golda Meir faced insurmountable odds. In desperation, she called the White House at 3 AM on October 6, 1973, and the Nixon administration acted decisively sending 22,000 tons of jets, tanks, and ammunition by air and by sea to Israel. Shortly afterward, Israel overcame its enemies once again and the war came to an end.

Next, you may argue that Donald Trump is not a godly man so how could this be part of God’s plan? Remember Sampson? And remember Isaiah 45, a pagan king, Cyrus, was raised up for a season. President Trump may or may not be a type of Cyrus from the Bible, but the importance of standing with Israel cannot be overstated.

According to the Times of Israel, when Benjamin Netanyahu visited the Whitehouse, explained in his remarks:

“Mr. President, my dear friend Donald, you’ve shown consistently incredible support for Israel, for our right to self-defense. When we exercise that self-defense, you have never flinched. You have always been there, including today, and I thank you; over the years, Israel has been blessed to have many friends who sat in the Oval Office, but Israel has never had a better friend than you.

You showed that when you recognized Jerusalem as Israel’s capital and moved the American embassy there. You said it; you did it. And you’ve shown it once again today, Mr. President, with your official proclamation recognizing Israel’s sovereignty over the Golan Heights.

“…I want to tell you that the Jewish people have a long memory, so we remember the proclamation of the great king, Cyrus the Great, the Persian king 2,500 years ago. He proclaimed that the Jewish exiles in Babylon could come back and rebuild our Temple in Jerusalem. We remember a hundred years ago, Lord Balfour, who issued the Balfour Proclamation that recognized the rights of the Jewish people in our ancestral homeland. We remember 70 years ago, President Harry S. Truman was the first leader to recognize the Jewish state. And we remember how a few weeks ago, President Donald J. Trump recognized Jerusalem as Israel’s capital. Mr. President, this will be remembered by our people through the ages.”

God seems to be using this imperfect vessel, this flawed human being like you and I, in an incredible, amazing way to fulfill his plans and purposes. The point is for us to pray for God’s will to be done and also – to keep our eyes on Israel.

No nation or world leader comes into power apart from God causing or allowing it to happen. The Lord also works all things for His glory.

“The king’s heart is like channels of water in the hand of the LORD; He turns it wherever He wishes. There is no wisdom and no understanding and no counsel against the LORD (Proverbs 21:1, 30).”

Israel controls less than one percent of all Middle Eastern territory and is surrounded by twenty-two hostile Arab and Islamic dictatorships. In fact, Arab nations have approximately 640 times more land than Israel, the only democracy in the region. A coalition of nations openly wants the Jewish state annihilated.

But God’s faithfulness throughout the Bible encourages us because we know we can trust that He will make good on the remaining prophecies about Israel, the return of Christ, the end times, and our Home-going. As for America, we’ll have to pray and see what happens.

“I have lived, Sir, a long time and the longer I live, the more convincing proofs I see of this truth − that God governs in the affairs of men. And if a sparrow cannot fall to the ground without His notice, is it probable that an empire can rise without His aid? We have been assured, Sir, in the sacred writings that ‘except the Lord build the house, they labor in vain that build it.’”

Most of us would agree God is no longer building ‘America’s house’ so be prayerful and watchful, my friend. I’m not sure who said it first, but things are not falling apart around the world; they are falling into place. Regarding upcoming world events, Jesus and the Bible will again be proven accurate, reliable, and true.

“Turn to Me and be saved, all the ends of the earth; For I am God, and there is no other. 23 “I have sworn by Myself, The word has gone forth from My mouth in righteousness And will not turn back, That to Me every knee will bow, every tongue will swear allegiance. Isaiah 45:22-23