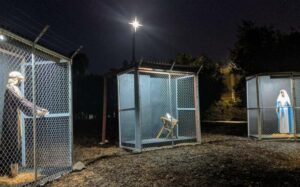 How far would a church go to make a political point? Instead of a traditional manger scene, one California church took a jab at President Trump by putting Jesus, Mary, and Joseph in cages outside the church to attack U.S. border agents and immigration policies.

Karen Ristine, the “Senior Minister” of Claremont United Methodist Church had her church put up three large cages topped with barbed wire, and separated the three members of the holy family. Upon seeing the display of political art, she said it stirred her to tears.

Hijacking certain Bible verses (and taking many out of context), liberals and progressive churches have been pushing the narrative that Jesus and his parents were “refugees” and some go so far as to equate Jesus with an illegal alien.

Not only does this imply Jesus and his family had to break the laws of sovereign nations in order for God to carry out his will, but where in Scripture does it teach that government should take tax money from its citizens and care for anyone and everyone who wants help?

Using the hashtag #holyfamilyseparated to make her political point, Karen Ristine’s church played its hand as just another progressive congregation waving the flag of Christianity as cover for their social justice campaign.

In the Book of James, it states:

Pure and undefiled religion in the sight of our God and Father is this: to visit orphans and widows in their distress, and to keep oneself unstained by the world. James 1:27

First, let’s make it clear religion doesn’t save anyone. Salvation is a gift of God offered through His grace to whoever will believe, and it’s by our faith in Christ that we are saved from the judgment to come.

Second, it’s difficult to be unstained by the world while dirtying yourself in political debates but using the Bible to criticize government or a president. And third, always remember context when reading and applying Scripture. Always.

James was writing to Christians, not the Roman government. And he was reminding them to put their faith into action by taking care of women and children in the church.

Now that we understand the context of these verses, let’s take a look at the female pastor’s Facebook post. Ristine stated:

Imagine Joseph and Mary separated at the border and Jesus no older than two taken from his mother and placed behind the fences of a Border Patrol detention center as more than 5,500 children have been the past three years.

Cue the orchestra and dramatic effects. She neglects to mention President Trump originally continued President Obama’s policy of detaining families at the border, but the media was suspiciously silent for those eight years.

Next, the government has no power or desire to be compassionate, nor does the Bible instruct the feds to love others. Scripture does, however, tell us it’s the responsibility of churches across the country and individual Christians to take care of those less fortunate.

According to U.S. immigration officials, because of incentives in U.S. laws and court decisions, many of the Central American families claiming asylum at the border after traversing through Mexico over the past two years are not families at all. Rather, immigrant smugglers tell them to pose as one to ensure a quick release into the U.S., where they can disappear into the larger illegal-immigrant population.

See the problem here? Facts matter. Especially when people are claiming to represent Christianity, we must address deception and expose progressive politics. The social justice movement, by the way, is apostasy; a departure from the faith.

Using a blasphemous manger display with Jesus as a political pawn is both desperate and disappointing. Rather than share the gospel and the love of God, this just divides people and distracts from the meaning of Christmas.