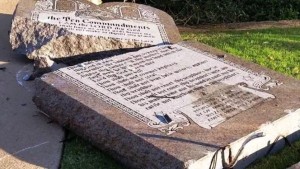 Blessed are those who hear the word of God and keep it. Luke 11:28

For no man can lay a foundation other than the one which is laid, which is Jesus Christ. 1 Corinthians 3:11

If the foundations are destroyed what can the righteous do? Psalm 11:3

We are warned in Scripture to guard against apathy, deception, and the seductions of the world. We are instructed to contend for the faith, to make disciples, to resist the devil, train ourselves in godliness, to be disciplined in our walk with the Lord, to grow in the knowledge of Christ, speak the truth in love, to produce lasting fruit, to press on and fight the good fight of faith, and many other instructions.

Why? Because it’s easy let up, get comfortable, pursue leisure, and fall away from God. I’m not necessarily talking about sin, but conforming to this world, being lukewarm in our faith; being less concerned about spiritual things, saved but ineffective and unproductive as Christians. Most of us struggle at times with loving this world a little too much.

Are you and I doing the will of God?

Why must we be diligent in our Christian lives, set apart for Christ, and pro-active and intentional about living for the Lord?

16 So the people answered and said: “Far be it from us that we should forsake the Lord to serve other gods; 17 for the Lord our God is He who brought us and our fathers up out of the land of Egypt, from the house of bondage, who did those great signs in our sight, and preserved us;

And when Joshua had dismissed the people, the children of Israel went each to his own inheritance to possess the land. 7 So the people served the Lord all the days of Joshua, and all the days of the elders who outlived Joshua, who had seen all the great works of the Lord which He had done for Israel. 8 Now Joshua the son of Nun, the servant of the Lord, died when he was one hundred and ten years old. 9 And they buried him within the border of his inheritance at Timnath Heres, in the mountains of Ephraim, on the north side of Mount Gaash. 10 When all that generation had been gathered to their fathers, another generation arose after them who did not know the Lord nor the work which He had done for Israel.

11 Then the children of Israel did evil in the sight of the Lord, and served the Baals; 12 and they forsook the Lord God of their fathers, who had brought them out of the land of Egypt; and they followed other gods from among the gods of the people who were all around them, and they bowed down to them; and they provoked the Lord to anger.

And these were God’s chosen people! It only takes a generation. And Israel still has not learned, it is primarily a secular nation, rejecting the true Messiah; Jesus, Yeshua.

What about us – here in America?

People risked their health, homes, families and in many cases, their lives to come to these shores and live for the one true God, free from religious persecution. The Lord graciously brought people to North America all the way from England when sailing by ship was costly, risky, long, and treacherous.

But they made it, by the grace of God, and history tells us about it!

Being thus arrived in a good harbor and brought safe to land, they fell upon their knees and blessed the God of heaven, who had brought them over the vast and furious ocean, and delivered them from all the perils and miseries thereof, againe to set their feete on the firme and stable earth … Having undertaken, for the Glory of God and advancement of the Christian Faith and Honor of our King and Country, a Voyage to plant the First Colony.” —William Bradford, Plymouth Governor (1620)

David now reads the First Prayer of the Continental Congress, 1774

Let’s just look at two indicators that we have fallen away – not only as a country but tragically, as Christians in America.

Brief History in Education and the Christian Church

Christians in the 1800s were gaining influence. Some consider that century the greatest missionary century in history. Our culture, institutions, laws, and businesses were influenced by Christians who, for the most part, were not ashamed to live their faith publicly and discuss spiritual things.

In the 1600s, ministers such as John Harvard established Harvard University and taught theology. Harvard College was founded in “In Christi Gloriam” as its founders believed: “All knowledge without Christ was vain.” Fifty percent of graduates became ministers.

“Veritas Christo et Ecclesiae” (TRUTH FOR CHIRST AND THE CHURCH) Great men such as John Quincy Adams, Samuel Adams and others graduated from Harvard.

Samuel Langdon was a colonial chaplain and pastor before becoming President of Harvard in 1776. One year earlier he spoke to the Massachusetts Provincial Congress:

“We have rebelled against God. We have lost the true spirit of Christianity, though we retain the outward profession and form of it.”

Gradually, non-Christians, liberal administrators, and professors had infiltrated Harvard leading to a drastic 1change in its motto: they removed “Christ” and the “Church,” leaving only “Veritas” (Truth) in 1836.

Less than 30 years later, President Abraham Lincoln, with full agreement and support of the U.S. Senate, declared a national day of fasting and prayer to God. This was only 87 years after celebrating America’s independence, and Lincoln was concerned about the country’s pride, financial blessings, and comfort, which go hand in hand with spiritual apathy. Part of his 1863 proclamation stated:

“[W]e know that, by His divine law, nations like individuals are subjected to punishments and chastisements in this world, …We have been the recipients of the choicest bounties of Heaven. We have been preserved, these many years, in peace and prosperity. We have grown in numbers, wealth and power, as no other nation has ever grown. But we have forgotten God.

We have forgotten the gracious hand which preserved us in peace, and multiplied and enriched and strengthened us; and we have vainly imagined, in the deceitfulness of our hearts, that all these blessings were produced by some superior wisdom and virtue of our own. Intoxicated with unbroken success, we have become too self-sufficient to feel the necessity of redeeming and preserving grace, too proud to pray to the God that made us! It behooves us then, to humble ourselves before the offended Power, to confess our national sins, and to pray for clemency and forgiveness.

Imagine what Lincoln or our founders would say if they could see America today!

By 1918, all states required mandatory school attendance for children, and the public education movement rapidly expanded in the decades to follow. Progressives such as socialist, John Dewey, were very influential in the development and direction of the system. In 1934, Dewey wrote an essay saying capitalism restricted freedom. He also stated:

“There is no God and no soul. Hence, there are no needs for the props of traditional religion immutable truth is also dead and buried. There is no room [in education] for fixed, natural law or permanent moral absolutes.”

The Snopes (“Monkey”) Trial took place in Tennessee in 1925 when there were laws against teaching evolution in public schools. But what happened was the Holy Bible was put on trial, really, and Christians were framed as narrow-minded, fundamental, and old fashioned, unwilling to progress with the times.

The NEA has become hostile toward the God of the Bible. On its website you can find LGBT proclamations and objectives as well as Harry Potter lesson plans.

We can’t deny America’s obsession with death, demons, zombies, and the afterlife; but since the 90s, Witchcraft has become popular, black magic cool, and casting spells, fun. Quotes Deuteronomy 18:9-14

How could we conclude on historical lowlights without mentioning the abomination of abortion – which has practically become a Sacrament of the Democrat Party today?

Margaret Sanger, founder of Planned Parenthood, was the first to promote birth control. She was an atheist, eugenicist, racist, and socialist, and she lead a movement beginning in the 1920s that has resulted in the murder of a hundred million babies in mother’s wombs across the land. And don’t you know that since 1973 it has become lawful to terminate a pre-born human life for any reason.

Remember this: man cannot make moral what God declared to be immoral. But public opinion sure has shifted on this issue in the last fifty years. What changed? Almighty God, Creator of heaven and earth and all things – or people and churches of America?

We must put on the full armor of God and be aware of the spiritual warfare around us. I can sum up this spiritual and cultural battle in 3 words:

Remember the verses we read from Judges chapter 2? Let’s change a few words to show how these principles apply to Christians here.

When God provided for the early settlers and the population grew, the Constitution of the United States was established and religious freedom was assured. Godly men were elected to office, the gospel was preached, life was enjoyed, and the pursuit of happiness became the goal. After that generation had died, another generation arose after them who did not know the Lord Jesus nor the work He had done in the early days of this country. Then the citizens of America did evil in the sight of the Lord, and served other gods such as money, entertainment, sex, and abortion; and they forsook the Lord God of their fathers, who had brought them out of the land of England; and they allowed the living God to be banned from their schools and mocked in the public square. Though almost everyone could read, fewer people read the Bible, and they followed other gods from among the cults and false religions of the people who were all around them, and they bowed down to them; and they provoked the Lord to anger.

As many as I love, I rebuke and chasten. Therefore be zealous and repent. 20 Behold, I stand at the door and knock. If anyone hears My voice and opens the door, I will come in to him and dine with him, and he with Me. 21 To him who overcomes I will grant to sit with Me on My throne, as I also overcame and sat down with My Father on His throne. 22 “He who has an ear, let him hear what the Spirit says to the churches.”

Yes, we are surrounded by evil. There is a war on truth going on. This nation’s moral and spiritual foundations have been attacked and shaken; culture is collapsing, and the church has been weakened. But if God be for us, who can be against us? Our instruction from God’s Word is to trust Him, live by faith, pray, make disciples, and engage in battle!

We must overcome the temptation to seek our own comfort, ease, or worldly success. We must overcome evil with good (Rom. 12:21). Since we don’t know how much time we have left, let’s be about the Lord’s business – preaching the gospel and calling Christians back to God. Onward, forward. One day at a time.

For His glory and coming kingdom! May you and I say, like many early American pilgrims and patriots; and like Joshua: