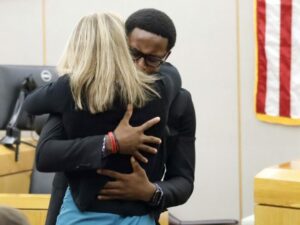 My wife and I were in tears as we watched the courtroom video last week. A man whose brother was shot and killed by former Dallas police officer, Amber Guyger, took the stand and did the unthinkable: he offered forgiveness. Brandt Jean captivated America by his decision to reach out and share the gospel of Jesus with Guyger, who killed his brother, Botham, when she mistakenly entered his apartment following a thirteen-hour work shift.

But not everyone was touched by this unselfish act of grace. Because the decided sentence was ten years in prison, many were angered and offended, demanding justice, condemnation, and the maximum penalty of the law.

Many people thought the forgiveness offered by Brandt Jean was a beautiful demonstration of mercy, God’s love, and grace. It was the power of the gospel of Jesus Christ rarely seen in a setting reserved for justice, sentencing, and punishment.

The jurors in the case could have sentenced thirty-one-year-old Amber Guyger to a minimum of two years all the way up to life in prison. Prosecutors wanted her to go to prison for 28 years, as that’s how old the victim, Botham Jean, would be today.

But inside the courtroom, many were in tears as Brandt Jean said, “I forgive you,” finished his comments, and asked the judge if he could please give Guyger a hug. Emotions were difficult to hold back as you heard Guyger’s muffled wailing and perhaps remorse in the compassionate arms of her victim’s brother.

Either the man is insane or he is a true Christian living out his faith in Christ. This just doesn’t happen naturally. How is this kind of forgiveness possible without the Holy Spirit and a supernatural move of God?

Outside the courtroom and across the Internet, however, many reacted with indignation at the lenient sentence. Upset with Brandt Jean’s choice to see Guyger forgiven and his desire to take a step toward restoration, to them it wasn’t justice.

Brandt Jean said his brother, a worship leader and youth pastor, would have wanted Guyger to give her life to Jesus:

“I want the best for you,” he said. “That’s exactly what Botham would want you to do, and the best [thing] would be to give your life to Christ.”

The next part of the story is just as unbelievable. Judge Tammy Kemp stirred even more controversy when she approached Amber Guyger after the sentencing, embraced her and gave a Bible to the convicted killer.

We seem to be in uncharted territory here.

Judge Kemp handed a Bible to Guyger and shared her own message of hope and redemption. It appears Kemp did what many of us don’t do: she took a moment to look beyond the mistakes made by someone and saw a human being.

Tammy Kemp referenced God’s love, John 3:16, offering hope, telling Guyger that she can be forgiven even though she did something bad, and that, “What you do now matters.”

Being asked about her actions toward Guyger, Kemp, who happens to be black, explained:

“I don’t understand the anger. And I guess I could say if you profess religious beliefs and you are going to follow them, I would hope that they not be situational and limited to one race only.”

The color of your skin shouldn’t matter to Christians, as we are both family and citizens of heaven. But sadly, Sunday morning is still the most segregated time in America in churches across the country. We are segregated by denominations and doctrine, but also by color and creed.

Again, as for past mistakes and sins, it’s what you and I do from this point on. No matter what you’ve done, God will forgive you – if you repent, confess your sins and simply ask Him. If it applies to you, get right with the Savior now, forget the past and surrender an unknown future to a known God in whose hands the future lies.

Regarding sin and the sacrifice of Jesus, Luke writes:

I know that you acted in ignorance… But what God foretold by the mouth of all the prophets, that his Christ would suffer, he thus fulfilled. Repent therefore, and turn back, that your sins may be blotted out, that times of refreshing may come from the presence of the Lord; Acts 3:17-20

Repent, come to Jesus and be refreshed!

Though she wasn’t as open about forgiveness as her son, Brandt and Botham’s mother, Allison Jean still spoke with grace outside the courtroom:

“Forgiveness for us as Christians is a healing for us, but as my husband said, there are consequences. It does not mean that everything else we have suffered has to go unnoticed,”

We also shouldn’t ignore the crime or see a killer as a victim. There was alleged corruption involved with the Dallas Police Dept. so hopefully, it is being addressed and cleaned up. That goes for law enforcement wherever necessary.

There are some fair questions to ask about this case, but let’s not overlook the healing display of God’s forgiveness.

On the day of the shooting, Guyger allegedly worked a 13-hour shift including helping a SWAT team in an arrest, and was on the phone with her partner while driving home. She mistakenly parked on the fourth floor of her apartment complex instead of the third floor. The units are similar and Guyger entered Botham Jean’s apartment in the dark.

Amber Guyger mistakenly shot Botham Jean thinking he was an intruder in her home. She was in the wrong apartment. Still, Brandt Jean forgave her.

Jesus Christ set the ultimate example on the cross, saying to those who plotted his execution, “Father, forgive them, for they know not what they do.” Luke 23:34

But many of the loudest voices in culture refuse to make room for this kind of mercy, redemption, grace, and forgiveness. Some, such as former ESPN anchor, Jamele Hill, said Brandt Jean’s actions were unacceptable.

And not all Christian outlets appreciated the story. At Christianity Today, author, Dorena Williamson warned people about distorting the gospel. She worries that in this case, people were quick to wash our hands, “like Pontus Pilate” did to Jesus:

Yes, God is a forgiving God. But we haven’t really understood the depth of that grace if all our examples of forgiveness are times when the people being forgiven look just like us. Given the long history of white supremacy in this country, we as Christians should ask: Why aren’t there videos of white people forgiving their black assailants trending on our social media?

I’m sure there are, but the videos may not have gone viral like this one. That doesn’t mean they don’t exist.

Also, just because we want to point out a rare moment of hope and healing doesn’t mean we are denying racism still exists in America. But let’s be honest here and acknowledge it exists in all colors. Some of us would like to help heal our land and improve racial divides – and this kind of story sure helps – while others want to stir up guilt or use the word “racism” to bring in campaign donations.

I would also caution us about throwing around accusations of white supremacy. It is disingenuous and unfair to lump all of us in with the minority of actual racists. It’s sad so many people refuse to be touched by the raw humanity and emotion of this story and allow it to affect them for the better.

Finally, what about us if it were our immediate family? Would you and I be prepared to show this kind of grace if a similar opportunity arose? Author and teacher, Peter Heck, describes the selfless act of Brandt Jean, saying:

“It was a moment that did more preaching than 100 sermons on grace, a moment that reemphasized to us believers the meaning of Jesus’s admonition to forgive our brother seven times seventy, a moment that enticed those outside of Christ with a stirring example of what they’re missing.”

Don’t miss this, friends. It is why the gospel is referred to as good news!

And this is His commandment: that we should believe on the name of His Son Jesus Christ and love one another, as He gave us commandment.1 John 3:23

Discipline of the Mind and Devotion
Kardashian Culture, Kanye West, and Celebrity Christians