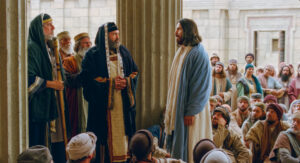 The cross had to come before the kingdom. Sermon by Pastor David Fiorazo, Freedom Fellowship Church, Kaukauna, WI, Matthew 21:23-46 (Transcript)

We read last week about Jesus triumphal entry into Jerusalem at Passover and there was celebration and jubilation. But the people wanted a king to rule at that time. But the crowd shouting “Hosanna!” would cry out, “Crucify Him” just five days later. Nonetheless, Jesus entered the holy city through the Eastern Gate and fulfilled the prophecies of Daniel, Psalms, Isaiah, Jeremiah, and Zechariah on His way to the temple.

Scripture also teaches that when the King of Kings returns, He will once again go from the Mount of Olives through the Kidron Valley into Jerusalem through that same Eastern Gate. Written five centuries before the birth of Christ, the prophet Daniel predicted this event and gave us the very date the Messiah would enter Jerusalem as King (Daniel 9:25).

After the suffering, torture, crucifixion, death, burial, and resurrection, an extremely important and overlooked event took place. After 40 days on earth, Jesus ascended to the Father and there was an interaction with angels giving the disciples instructions. [Acts chapter 1]

9 Now when He had spoken these things, while they watched, He was taken up, and a cloud received Him out of their sight. 10 And while they looked steadfastly toward heaven as He went up, behold, two men stood by them in white apparel, 11 who also said, “Men of Galilee, why do you stand gazing up into heaven? This same Jesus, who was taken up from you into heaven, will so come in like manner as you saw Him go into heaven. 12 Then they returned to Jerusalem from the mount called Olivet, which is near Jerusalem, a Sabbath day’s journey. ACTS 1:9-12

Jesus Christ came the first time to seek and save the lost, to show us the way to the Father, and to give His life as a ransom for many. He became the perfect sacrifice and atoned for the sins of the people. When He returns next time, according to Zechariah 14:4:

At the return of Jesus Christ, He will enter the city through the now cemented and sealed Eastern Gate (Ezekiel 44:1-3; Nehemiah 3:29), built upon the ruins of the original city gate in Jerusalem.

In about 593 BC, the prophet Ezekiel recorded this vision:

Now open up the Gospel of Matthew for today’s text in chapter 21.

Verses 23-27: Back in the temple, Jesus’ authority is questioned

Note Jesus teaching in the temple.

The chief priests and the elders of the people confronted Him as He was teaching: In His previous visit the day before, Jesus drove out the money-changers and merchants from the temple courts. Now He returned there to teach, unafraid of the religious leaders.

By what authority are You doing these things?

The religious leaders raised the question of Jesus’ authority, looking for an excuse to arrest and kill Him. Jesus answered by raising the question of their competence to judge. We might understand their question this way: ‘Where did you go to seminary or who ordained you for ministry?’

Jesus answered… The baptism of John: where was it from?

We do not know: They answered only after calculating the political consequences of either answer. They didn’t seem interested in answering the question honestly, only cleverly. This showed they were more interested in the opinions of the multitude rather than the will of God.

There are none so blind as those who refuse to see. they were not fit to be in conversation concerning Christ’s authority; men of such a disposition could not be convinced of the truth;

Verses 28-32 – parable of two sons: this teaching from Jesus represents two kinds of people with two different characters; some who perform better than they promise, and others who promise better than they perform.

“But what do you think? A man had two sons…” Son, go work today in my vineyard: The father spoke to this son individually; he did not speak to the sons together. Though the same invitation was given to both sons;

There are many churchgoers that align with the second son:

Their hearts are so set upon their own fields, that they are not interested about working in God’s vineyard.

*Recall the lesson from the fruitless fig tree representing Israel, cursed by Jesus, and how we must abide in Christ to bear good fruit: it’s not the promise that matters but performance.

“The second son said, ‘I go, sir,’ but he went not; and these people do not go. They talk of repenting, but they do not repent. They speak of believing, but they never believe. They think of submitting to God, but they have not submitted themselves to him yet. They say it is time… but they do not seek him. It all ends in a mere promise.” (Spurgeon)

Could Jesus be thinking of Israel back in Exodus 24 saying, “All that the Lord has said, we will do” We will obey. But history reveals their rebellion.

Which of the two did the will of his father? The point of this parable is clear. What matters is living for God, not saying the right words. The religious leaders were good at talking righteous talk, but their unrepentant hearts showed that repentant sinners would enter the kingdom before them.

D.A. Carson states: “The shock value of Jesus’ statement can only be appreciated when the low esteem in which tax collectors were held, not to mention prostitutes, is taken into account.”

Verses 33-41: The parable of the vineyard and the wicked servants.

“Hear another parable: There was a certain landowner who planted a vineyard and set a hedge around it;

The Old Testament often used the picture of a vineyard to speak of Israel (Deut 32:32, Psalm 80:8, Jer. 2:21, and esp. Isaiah 5:1-7). This parable traced God’s ways with Israel in the past and their rejection of His messengers. The servants in the parable were the prophets, Jehovah’s representatives.

They will respect my son…This is the heir. Come, let us kill him and seize his inheritance: the chief priests and elders plotted to kill the Father’s Son sent to the rebellious leaders of Israel. Never did sin appear more awful than in the treatment and torture of Jesus.

Hebrews 13:12 states, “Jesus also, that He might sanctify the people with His own blood, suffered outside the gate.”

They answered Jesus and declared their own condemnation: He will destroy those wicked men miserably: The chief priests and elders understood what the wicked servants deserved. Truly, those who rebel against their master this way deserve judgment. (The Romans destroyed Jerusalem in A.D. 70)

And lease his vineyard to other vine-dressers who will render to him the fruits in their seasons: The leaders of Israel were so corrupt that God was announcing transfer of leadership to others.

The kingdom and all the spiritual advantages entrusted to Israel would now be given to the church, which consists primarily of Gentiles (Rom. 11:11)

Jesus said to them, “Have you never read in the Scriptures:

‘The stone which the builders rejected (refers to His crucifixion)
Has become the chief cornerstone. (His resurrection, restoration)
This was the LORD’s doing,
And it is marvelous in our eyes’? (Psalm 118:22-23)

This manner of speaking to the chief priests and elders of Israel must have angered them. Again, Jesus speaks to the leading theologians of Israel and asks them if they have ever read their Scriptures!

Jesus quoted this to remind them that their rejection of Him said more about their guilt and coming judgment than it said about Jesus Himself. Though they reject Him, He’s still the chief cornerstone, fulfilling the great Messianic Psalm.

Clearly, Jesus claimed to be the rejected stone that God appointed.

The kingdom of God will be taken from you and given to a nation bearing the fruits of it: Jesus warned the religious leaders that if they continued their rejection of God and His Messiah, they could expect God would pass the leadership of His work on earth to others. And He embraced the Gentiles.

4 Coming to Him as to a living stone, rejected indeed by men, but chosen by God and precious, 5 you also, as living stones, are being built up a spiritual house, a holy priesthood, to offer up spiritual sacrifices acceptable to God through Jesus Christ. 6 Therefore it is also contained in the Scripture, “Behold, I lay in Zion; A chief cornerstone, elect, precious, And he who believes on Him will by no means be put to shame.” 7 Therefore, to you who believe, He is precious; but to those who are disobedient, … a rock of offense.” They stumble, being disobedient to the word, to which they also were appointed. 9 But you are a chosen generation, a royal priesthood, a holy nation, His own special people, that you may proclaim the praises of Him who called you out of darkness into His marvelous light;

Another nation. A people of God derived from all nations, Jew and Gentile.

What a warning this chapter is to our own country and the church! We’re seeing the sacrifice of our Lord mocked, His deity questioned, and God’s Word being attacked and misinterpreted.

Nevertheless I have this against you, that you have left your first love. 5 Remember therefore from where you have fallen; repent and do the first works, or else I will come to you quickly and remove your lampstand from its place—unless you repent. Revelation 2:4-5

Lampstand represents influence or power. As the church in Ephesus John writes about here, the Lord may take away the prominence America has been blessed with and find others who will prove more faithful to his Gospel. 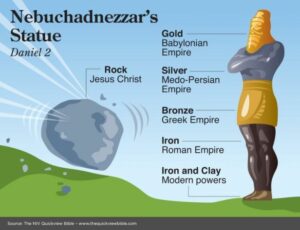 This stone: Christ is a stone to strike & a rock to stumble over for unbelievers.

The prophet Daniel pictured Jesus as a great stone which falls on the kingdoms of the world and crushes them. Daniel 2:44-45

And in the days of these kings the God of heaven will set up a kingdom which shall never be destroyed; and the kingdom shall not be left to other people; it shall break in pieces and consume all these kingdoms, and it shall stand forever. Inasmuch as you saw that the stone was cut out of the mountain without hands, and that it broke in pieces the iron, the bronze, the clay, the silver, and the gold—the great God has made known to the king what will come to pass after this;”

They sought to lay hands on Him: Instead of repenting, the religious leaders responded with anger, continuing to increase the greatness of their sin of rejecting Jesus.

They perceived that He was speaking of them: A guilty conscience needs no accuser. There was no doubt they knew the parable was about them.