By David Fiorazo on May 21, 2019 in Abortion, biblical values, Christianity in America, Culture and Morality, David’s Blog, Feminism, Pro-life, Uncategorized 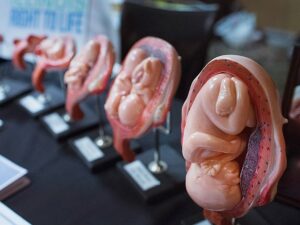 Actors Jim Carrey, Alyssa Milano, and a cast of other liberals are fighting for abortion, but their tactics seem to be backfiring because they’re unintentionally making a case for the pro-life movement. It’s “Hollywood vs. Alabama and Georgia” – “Liberalism vs Life” in the ongoing war against truth.

On Saturday, Jim Carrey posted a graphic piece of artwork he created intending to defend abortion, but it actually depicts the violence of the life-ending procedure. Carrey is attacking Alabama Governor, Kay Ivey because she signed a bill into law last week restricting abortions in the state.

The idea behind Carrey’s art is Kay Ivey should have been aborted – and shows her brains being sucked into a tube. He tweeted:

“I think If you’re going to terminate a pregnancy, it should be done sometime before the fetus becomes Governor of Alabama,”

Carrey apparently knows what the majority in Alabama want. While signing the legislation, Governor Ivey said the bill had many supporters, and is a result of citizens having the “deeply held belief that every life is precious and that every life is a sacred gift from God,”

Author and blogger, Matt Walsh responded to Carrey’s artwork and made some sobering statements on Twitter last weekend:

What Jim is depicting here is an aspiration D&C abortion. A metal speculum forces open the birth canal and a powerful vacuum tube sucks out the baby piece by piece. The remaining body parts are scraped out and the mangled corpse is tossed into a medical waste dumpster. https://t.co/DrEEwp49G6

What Jim is depicting here is an aspiration D&C abortion. A metal speculum forces open the birth canal and a powerful vacuum tube sucks out the baby piece by piece. The remaining body parts are scraped out and the mangled corpse is tossed into a medical waste dumpster.

The left claims they are “pro-choice.” What about choosing abstinence, adoption, birth control (not post-pregnancy!), marriage, or making the difficult decision to have the baby? They act as if killing a living, developing fetus is the only option.

Arguing for abortion, Democrats in Hollywood, the media, and government often demand men stay out of women’s choices, right? Well check out this tweet by Conservative activist, Antonia Okafor:

All these pro-abortion feminists complaining that… “Men shouldn’t be making decisions about a woman’s body!” Great news! The Alabama Governor is a woman.

Just a few weeks ago, Hollywood activist, Alyssa Milano unwittingly promoted conservative values when she called for a sex strike in response to the heartbeat bill in Georgia signed by Governor Brian Kemp. In case you missed it, note the drama in her demands:

“Our reproductive rights are being erased. Until women have legal control over our own bodies we just cannot risk pregnancy,” Milano tweeted. “JOIN ME by not having sex until we get bodily autonomy back. I’m calling for a #SexStrike. Pass it on.”

Don’t look now, Alyssa, but you’re unintentionally promoting conservative values. An actress calling for abstinence? Well, the public schools won’t do it. Not only will there be less adultery and fewer pregnancies, but we could also see a reduction in STD’s. Sounds like a win win to me.

The Georgia law bans abortions and forbids doctors from ending pregnancies when a heartbeat can be detected, which is roughly at six weeks. With a small cast of Hollywood liberals, Milano went to Kemp’s office threatening the state of Georgia saying production companies will film movies elsewhere.

This is just another tedious bullying tactic by the Left.

@Alyssa_Milano to claim that giving MORE children of color the right to be born will negatively affect “women of color” reveals IGNORANCE, RACISM or …both. Our children and families are capable of greatness and lies like this harm our future. Don’t patronize us.

Milano replied to Watson saying her hope is to “stand in solidarity with all women as we fight for reproductive justice and true equality.” Is she really speaking for all women?

“Reproductive justice?” What about fetal justice? A person chooses to reproduce when they have sex, that’s procreation, a main reason for marriage. Your body, your choice? What about that other body in your womb with separate DNA and a beating heart?

For Christians, the Bible states:

“Or do you not know that your body is a temple of the Holy Spirit who is in you, whom you have from God, and that you are not your own? For you have been bought with a price: therefore glorify God in your body.” 1 CORINTHIANS 6:19-20

So thank you, Jim Carrey, for displaying the truth about a gruesome abortion procedure. Thank you, Alyssa Milano, for demanding common sense sexual restraint even though it goes against your liberal values. And thanks to those who support Christian values; and to volunteers for praying, speaking up, and standing up for Life.

Bullying OK – if the Bullies are Liberal?
Liberal Christianity is an Oxymoron